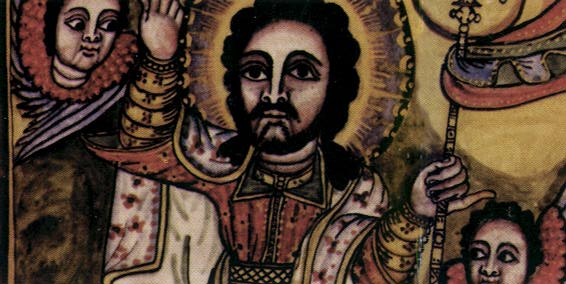 On this day died the holy father Abba Michael, the fifty-sixth Archbishop of the city of Alexander. This father was perfect in all his good works, and there came upon him tribulation and great sorrow during his days of office. Now this was brought about through a certain wicked bishop who was over the city of Seha, who loved the glory of this fleeting world. There was in the city of Danaweser, which was under his jurisdiction, a certain church that had been rebuilt, and the people wanted him to have it consecrated. And the elders of the city who had rebuilt the church, asked that wicked bishop to send letters to the father, the archbishop, and to the bishops in the districts round about them, so that they themselves might be blessed by them, and that they might bless their church. And the wicked bishop did not wish to send to the father, the archbishop; and the people sent a letter to the archbishop on their own behalf, and brought him. And the father, the Archbishop Abba Michael, having arrived, contrary to the wish of that wicked bishop, the bishop left the people in the church, and went out to make ready a meal for them. And he did not remember the words of our Lord Who said in the Gospel, “Martha, Martha, thou tirest thyself over much and makest ready a little food.” When the time for the consecration had passed, and the wicked bishop had not arrived, and the people had waited a long time, the bishops and the elders asked the father, and archbishop, to begin the consecration, and that they might read the Scriptures until that bishop arrived. And having urged this father, the archbishop with difficulty rose up–he the father of them all and having authority over them, and he began the consecration. When the wicked bishop heard of this, Satan entered his heart, and he rose up, and came to the church, full of wrath, and he went into the sanctuary, and snatching the Offering from the plate he broke it and dashed it to the ground; and he went out being full of wrath. And the archbishop commanded and they brought another Offering, and he consecrated it and gave to the people the Holy Mysteries. And on the following day this honorable father gathered together the people, and the bishops who were with him, and the priests and the teachers, and he cut off that wicked bishop from his see, and appointed another bishop in his stead. And Satan entered into the heart of that wicked bishop, and he went to the Governor of Egypt, Ahmad Ibn Tawlun (born A.D. 835, died 884), and laid information against this father, the archbishop. And he said unto him, “Know thou that this archbishop possesseth much riches, gold and silver, and also many churches which are filled with sacred vessels, in gold and silver.” And the governor had this father brought before him, and he demanded from him the sacred vessels, which were in the churches. And the archbishop refused to give them up, and he said unto the governor, “Behold, my body is before thee, do what thou wishest with me; and my soul is in the hand of God.” And the governor commanded his soldiers to bind him hand and foot, and they bound him, and shut him up in prison; and he remained in prison for a year and more. And this father began to fast continually, and he ate nothing but bread, and salt, and boiled beans. After this a certain scribe, a Christian and a believer, whose name was John, came to the governor, and became surety for the archbishop, and he undertook to give the governor two thousand dinars in gold. And the father, the archbishop, came forth from prison, and he departed to his house and remained there for a few days. Then the believing elders and the monks of the desert of Scete collected ten thousand dinars of gold, and the men of Alexandria, who had sold a portion of their estates, [also] collected as much as a thousand dinars, and the archbishop gave them to the governor. And this [father] himself signed a document for the men of Alexandria [promising] to give them each year ten hundred dinars, and the other sum of ten thousand dinars he wished to regard as a loan from the believers; and he came from his house, so that he might visit [various] cities. And he came to a certain city [called] Balbayus (Beles) and rested therein for one day. And there came unto him a certain poor and needy monk, who was dressed in rags, and he received a blessing from the father, the archbishop, and he lodged by the gate with his disciple. And he said unto his disciple, “Say to the father, the archbishop; Be not anxious in thy mind, for within forty days from this day thou shalt be relieved, and thou shalt receive the bond of redemption under which thou art liable; and thou shalt give nothing to the governor.” And the disciple spoke to the father, the archbishop, and informed him according to the orders of the monk; and the father sought for the monk but could not find him. And before forty days were ended the governor died an evil death. And his son was appointed governor in his stead. And he returned to the father, the archbishop, the bond of redemption, and he was freed from his obligation even as the monk had prophesied. And this father after living in great tribulation and sorrows [all] the days wherein he held his office, that is to say, twenty-nine years, died in peace.

And on this day also our Lord raised the righteous man Lazarus from the dead, he having been dead for four days; and very many people believed because of this great miracle. Salutation to our Lord’s journey from Jerusalem to Bethany when He raised up Lazarus.
[On this day is commemorated Tsege-Selassie, the ascetic.]

And on this day also Stratonice became a martyr, and glory attacheth to this holy woman. Her father was a worshipper of idols, but she was a believer on our Lord Jesus Christ, and she fasted and prayed in secret, until her body became emaciated, and her appearance was changed. When she was fourteen years of age her father and her mother said unto her, “What is it that maketh thee so emaciated?” And she said, “I pray to our Lord Jesus Christ to forgive my sins.” When her father heard this he went to Tiberius and told him the matter concerning his daughter, and he brought her to the tribunal and the governor, and the governor tried to persuade her to worship idols; when she refused he cast her into the prison house. And her mother, who was a Christian, came to her, and strengthened her in the Faith of our Lord Jesus Christ. Then the king ordered his men to make an iron ball redhot, and they made her to hold it in her arms and to clasp it to her breast, and she took it in her hands and broke it; and when the people saw this they believed on our Lord Christ, and as many as seven hundred and thirty men became martyrs. And they brought her again into the prison house. Then they made an iron animal with claws (or, hooks) in it, and they brought her to it to cast her into its belly, and to hang her upon the claws (?), but when they did this the animal, by the power of God, became split asunder on this side and on that. When the people saw this they believed on our Lord Christ, and about four thousand and eighty-one became martyrs. Then they cast her into a pit, which was full of venemous serpents, and when she prayed they became like dust. And they also brought a huge stone, which was as much as four men could carry, and they suspended it from her neck; and when she prayed the stone split into four pieces. And those who saw this believed in our Lord Christ; now they were pagans, fourteen in number, and they became martyrs. And they prepared an iron pot full of boiling lead to pour upon her, and when they grasped the pot, it broke, and the lead ran over them, and killed those who prepared it. And the king was wroth, and he commanded his soldiers to cut off her head with a sword, and when she had come to the place of martyrdom she prayed to God, and a voice came from heaven, saying, “O blessed art thou Stratonice, for thy name is written in the Book of Life”; and then she was crowned by the sword.