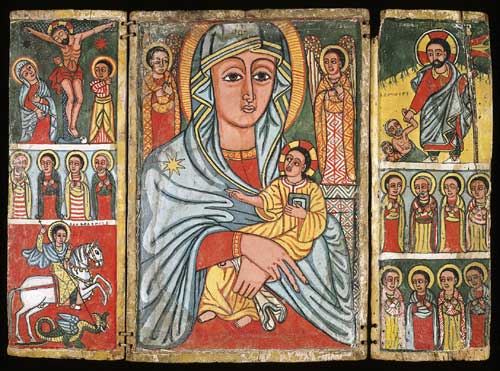 Salutation to the going up of Christ to Jerusalem, and to His entry therein.

And on this day also died the holy father and spiritual man Abba Cyril, Bishop of the city of Jerusalem. This holy father grew up under the teaching of the Church, and he was an exceedingly learned teacher. When Maximus, Bishop of Jerusalem, died, the people chose this father and appointed him to be his successor, and he shepherded his people well and carefully, and he protected them from the abominable and heretical wolves. And when the bishops were assembled in Council in Sedreke, this father came and disputed with the followers of Arius, and he defeated them. And he scattered them and drove them away, and he chased Acacius from his throne of the city of Caesarea. And Acacius went to Constantine the emperor, the son of Constantine the Great, and he complained to him about what had come upon him through the Council, and especially about what he had suffered from Cyril. And the emperor sent and exiled this Cyril from the city of Jerusalem, and he drove many bishops from their thrones. And this holy man went to the city of Tarsis, and he visited Sylvanus, bishop of that city, who helped him and made him stay a few days with him. And when the Council assembled in Lukaya, this father was one of those who were present thereat, and he cursed Akayyos (Achaeus). And Akayyos (Achaeus) also went to the emperor, and told him what had befallen him, and he made accusations against this holy father Abba Cyril to the emperor, who sent and again exiled him. When Constantine died, and his son Constantine reigned, he sent and brought back this father from exile to his throne, and he also brought back all those bishops whom his father had exiled. And this father lived for the remainder of his days in peace and quietness. When Theodosius the Great reigned, and a Council of One Hundred and Fifty Bishops were assembled in Constantinople, on account of Macedonius, and Sabellius, and Apollinarius, this father came and cursed all those who followed them. And he added to the prayer of the Faith which the Three Hundred and Eighteen Orthodox Fathers had drawn up from the place where it saith, “And we believe in the Holy Spirit” to the end thereof. And this father composed many Homilies and Exhortations, and he composed also a second book which contained eighteen Homilies on the translation of the prayer of the Faith (i.e. Creed), and this book is exceedingly profitable, and is full of all kinds of wisdom. And he sat on the Episcopal throne three and thirty years, and died in peace.