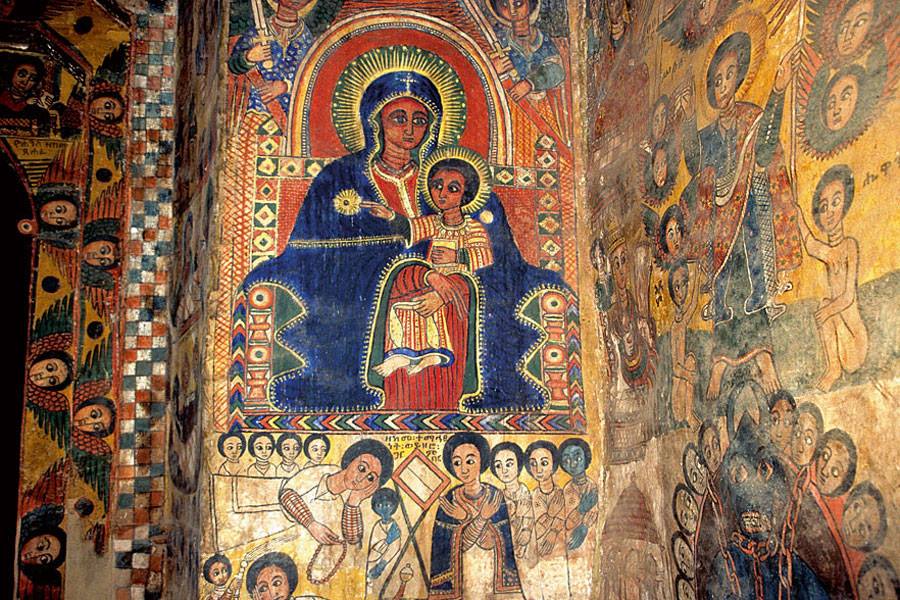 On this day died the holy and blessed woman Eupraxia. This holy woman was the daughter of a great noble who was a member of the Senate of the city of Rome, and who was a kinsman of the Emperor Honorius. When her father was dying Emperor Honorius issued commands that his daughter was to be well protected. After her father’s death the Emperor Honorius betrothed her to a certain noble, who belonged to a great and noble family. About that time her mother went to the country of Egypt to receive the revenues of her estates, and the fruit of her orchards, which her husband had left her, and she took her holy daughter who was then nine years of age, with her. When she arrived in the land of Egypt, she dwelt in a certain house for virgins until she had finished her work. Now the virgins of that house lived lives of strenuous asceticism, and they never ate food, which contained meat, and they neither partook of oil nor of sweet fruits; and they at no time drank wine. And Eupraxia loved the life in that house, and she was greatly pleased with the ministration thereof. And the mother superior thereof said unto her, “Promise me that thou wilt not go forth from this house, and that thou wilt not return, and seek out him to whom thou art betrothed”; and she promised her this thing. When her mother had finished her work, she wished to return to her native land, but this holy woman did not wish to return with her mother, and she said unto her, “I have vowed myself to our Lord Jesus Christ.” When her mother knew that Eupraxia would not go with her, she gave all her goods to the poor and needy, and she lived with her daughter in the house for many years, and died [there]. When the Emperor Honorius heard that she was dead, he sent messengers to bring her daughter Eupraxia [to Rome], so that he might give her in marriage to the man unto whom he had betrothed her. And the holy woman sent a letter to Honorius the emperor and said unto him, “Know, O Emperor, that I have vowed myself to our Lord Jesus Christ, and I cannot break the covenant which I have covenanted with Him.” When the emperor heard her message he wept much and marveled at her wisdom, for she was very young. And Saint Eupraxia contended strenuously in the ascetic life, and she devoted herself with zeal to spiritual songs and hymns. She [at first] fasted two days at a time, and every ten days she fasted for three days, and then for four days, and afterwards she fasted for a week at a time; and during the great and holy fast of the Forty days she never ate anything, which was cooked with fire. And Satan was jealous of her, and he smote her with many severe blows in her feet, ad she continued to be sick for many days. After this God had compassion upon her and He healed her sickness, and gave her the power to heal the sick, and she healed many sick persons; and she was submissive and obedient to the abbess in humility, and she was beloved by every virgin. One night the abbess saw a vision of a habitation and crowns, which had been prepared, and she wondered and said, “Who are these for? Is there anyone here with me who is meet for them?” And one said unto her, “This abode and these crowns are for thy daughter Eupraxia, and she will come hither to Me.” And the abbess told the virgins of the vision which she had seen, and commanded them not to tell Eupraxia about it. Now God wished to give her rest, and she fell sick of a slight fever. And the virgins gathered together to her, and the abbess and the mother superior with whom she had made a covenant, and they all asked her to remember them; and then she died in peace. And the virgins wept and sorrowed for her exceedingly, for they missed the holy maiden sorely. Now after Eupraxia, her friend the mother superior died, and a few days later the abbess fell sick. And she gathered together the virgins and she said unto them, “Choose whom ye will appoint to be abbess over you after my death, for I am going to God, and Eupraxia hath asked for me; and now shut the door on me.” And the virgins went and did as the abbess had commanded them, and when they came on the following morning to her they found that she was dead. Salutation to Eupraxia.

And on this day also is commemorated Saint Perpeius. Salutation to the glorious Saraius, the man of God.
And on this day also our Lord washed the feet of His disciples, and He said unto them, “Do ye also this for each other.”
And on this day also Judas betrayed our Lord, and he received his price, thirty pieces of silver, even as the prophets foretold.
Glory be to God Who is glorified in His Saints. Amen.