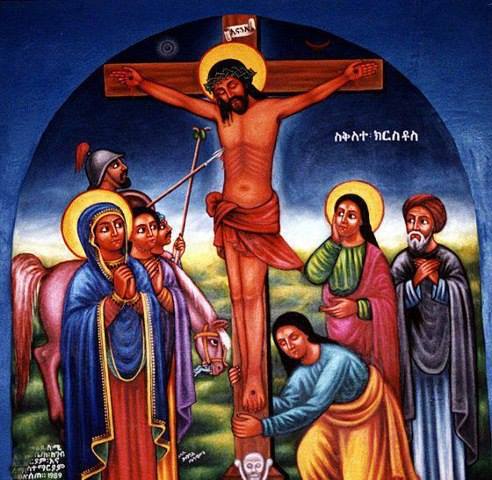 Salutation to Thy Passion, O God the King.
Salutation to Thy Crucifixion on the Cross.
Salutation to the going forth of Thy Soul from Thy Body.
And on this day also died the strenuous ascetic and fighter Abba Hezekiah, the father of the monks of Dabra Libanos. He was the fourth abbot from our father Takla Haymanot. [Omitted in the Bodleian MS.]

And on this day also the God-loving Claudius finished [his] crowning with martyrdom. He was brought up piously by the Orthodox King Lebna Dengel (i.e. David II, Wanag Sagad I, who died 2nd September, 1540) and when his father died God made him king. There was a certain Muslim, whose name was Grann (i.e. the “left-handed”), who called himself a king, though it was not right [to do so], and all the men of Ethiopia believed in his might, and associated themselves with him in his belief. The remaining people in the country who clung to Christianity, he made to slave for him. He pulled down the churches, and carried off the greater number of the people captive into Ethiopia, and he sold them to whom he pleased. And he said, “Henceforward no man can resist me; I have captured all the cities.” Then God raised up King Claudius, and he began to make war against the nobles of the kingdom of that iniquitous man, and he conquered them. When Grann heard [this] he was furious, and he marched against Claudius with tens of thousands of men, and horses, and Turks, and they joined battle, and God killed him, and destroyed him by the hand of Claudius. And the captives returned [from Ethiopia], and the churches which had been laid waste were rebuilt, and the Orthodox Faith of Christ [was restored]. After this one of the Muslims came with many men of war, and he came upon King Claudius when he had [only] a few men with him. And the Muslim said unto him, “Let us remain quiet and not fight each other until the officers of our armies arrive.” And Claudius said, “I will not remain quiet, and see Christians carried off into captivity, and the churches destroyed.” Whilst he was saying this the soldiers arrived, and the fighting between them waxed fierce and strong. And all the Muslims closed up behind him, and they all stabbed him with their swords, and they pierced him with many spears, and they dragged him down off his horse, and he died, and they cut off his glorious head with the sword, and they carried it off. Salutation to the mention of the name of Claudius. A prayer to Christ to bring Sharad Dengel into the kingdom of heaven, and to preserve the kingdom of his son Fasiladas (i.e. Sultan Sagad II, ‘Alam Sagad, who died in October, 1667).

And on this day also died the God-loving King Claudius, and the glorious father, Abba John, Abbot of Dabra Libanos, and a very large number of believing monks, who became martyrs through the soldiers of the Muslims.
Glory be to God Who is glorified in His Saints. Amen.