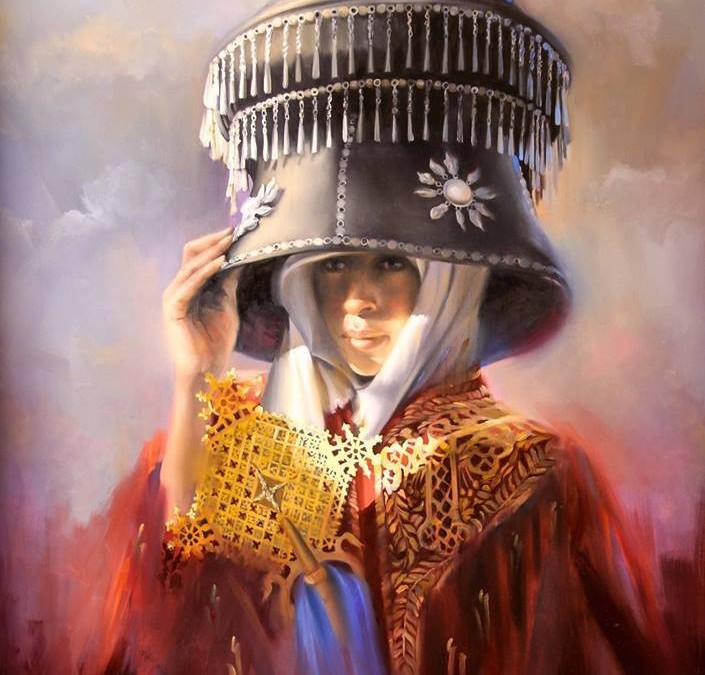 On this day it is meet for us to celebrate a festival in honor of the glorious angel Gabriel, for his honor is great with God, and he was held to be worthy to bear the announcement of His birth to our Lady Mary, His mother. And for this reason God had compassion upon us, with this great gift and honor, through this angel, and it is meet for us to pay him honor, and to praise him. And also it was he who told Daniel about our Lord Christ, when he was praying and making supplication for the return of the people from captivity, and about the coming of our Redeemer Christ. And he appeared unto him, and defined the weeks, and revealed unto him that our Lord Christ would come at the end of them . . . and that [the Jews] would kill Him, and that after Him Jerusalem would never have another deliverer, and that after Him they would destroy the altars and the offerings of the children of Israel. And because our Lord Christ had appointed this angel, it was meet for him to announce to our Lady Mary the salvation of all the world. For this reason it is meet for us to make a festival unto him at all times, and that we should entreat him to intercede for us, so that God may deliver us out of the hand of Satan, our Adversary, in all our work. Salutation to Gabriel who was sent to Mary.

And on this day also is commemorated Samson, one of the Judges of Israel. The name of the father of this righteous man was Manohe (Manoah), and he was of the tribe of Dan; and his mother was barren. And the angel of the Lord came unto her, and announced unto her his birth. And he commanded her to keep herself remote from pollution, and from the eating of meat, and from the drinking of wine, which would make her drunk, whilst she was with child, and until she had brought forth her child. And she was not to shave the hair of his head, for he was to be a votive offering to God, and through him the deliverance of the children of Israel from the Philistines was to be effected. When she told her husband what the angel of the Lord had announced to her, he entreated God to shew him that angel. And the angel of the Lord appeared unto him, and he said unto him, “Bid thy wife to take good heed, and to observe what I have commanded her.” And she conceived and brought forth this righteous man, and God blessed him, and the grace of the Holy Spirit of God descended upon him. And he was born with strength, and on one occasion he rose up against a lion and rent him in twain. And on another occasion he slew of the men of the Philistines eighty men, and burnt their city. And the men of the Philistines rose up against the children of Judah to fight with them because of him, and they delivered Samson into their hands. And the children of Judah told Samson what the men of the Philistines had said unto them. And Samson said unto the children of Judah, “Swear ye to me that ye will not deliver me into their hands, and that ye will not kill me.” And having sworn unto him he delivered himself up to them, and they bound him with two iron chains, and delivered him over to the men of the Philistines, who rose up against him to kill him. And a spirit of strength came down upon him from God, and he broke those chains like threads which had been charred by fire. After this he found the jawbone of an ass, and he slew therewith a thousand horsemen of the Philistines. And being athirst, and nigh unto death, he asked God, and He made sweet water to flow out of the jawbone, and he drank and was strong. And the children of Judah laid an ambush for him in the city of Gaza, so that they might seize him; and he rose up by night, and lifted up the gates of the city of Gaza, and carried them upon his shoulders up to the top of a hill. And afterwards when they were conquered by him, they sent to his wife and covenanted to give to her much money, and they said unto her, “Find out from thy husband Samson with what he maketh himself strong.” And she asked him, and he told her that his strength was in the hair of his head, because he was a vow to God. And she told his enemies, and said unto them, “His strength is in the hair of his head”; and they waited in a secret place until he was asleep. When he was asleep his enemies came to him, and they shaved off the hair of his head, and his strength failed. Then the men of the Philistines came into his house, and they bound him and took him to their own country with joy, and they put out his eyes; after this the hair of his head sprouted, and his strength returned to him. And he came into the house of idols on the day of the festival of their idols. When all the men of Gaza had gathered together in the house of idols to worship their idols. And Samson stood up in the house of idols, and he laid hold of the two pillars, one with his right hand, and one with his left, and he lifted up both of them, and the two pillars fell down, and that house of idols fell down. And those who died in that house of idols at that slaughter were far more in number than those he had slain in all the days of his life; and he himself died with them, for he determined that all the enemies of God, who were very many, should die with him. And all the days which Samson judged Israel were twenty years, and he died in peace. Salutation to Samson who was called the Nazarite.

And on this day also was translated the body of James the “chopped.” Now behold, we have written the history of his strife on the twenty-seventh day of the month of Hedar.
Salutation to James, the “chopped,” whose body was translated from Persia.
Salutation to John who afflicted his body with toil, and who ate only as much bread as the hand would hold.
Here endeth what is read in the month of Magabit in the peace of God.

[Here follows a long section on Gabra Manfas Kedus, which is wanting in the Bodleian
MS.]