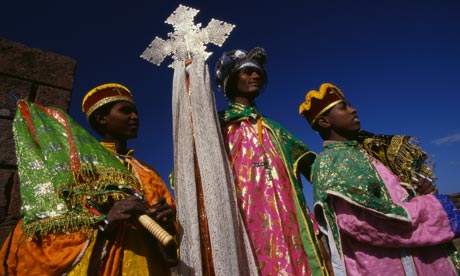 This blessed month of Maskaram is the first of the circle of the years of Egypt and Ethiopia.  The [first] day and the night of this month are equal–twelve hours.  Then the day during this month Maskaram diminisheth because this month is the first of the circle of the years of Egypt and Ethiopia.  Now it is meet that we should make therein a great feast in all purity, because this day is holy and blessed, and we should remove ourselves from evil works.  And we should begin [to do] good works and new, whereby God is pleased, even as Paul the apostle saith:  “Behold, every work is made new in Christ.  Behold old works have passed away, and behold new works are known, and every work is from God” (2 Corinthians 5:17).  Thus hath God had pleasure over us in Christ, and He hath given us the ministration of His mercy and compassion.  And Isaiah the prophet saith:  “The Spirit of God is upon me; therefore hath He appointed me and sent me to preach to those who are in captivity, and to those who are in prison, and to set them free, and to the blind that they may see the light, and to those who are bound that they be set free, and to preach the year of the mercy of God” (Isaiah 61:1-2).  And David saith: “Thou hast blessed the crown of the year [with] mercy, and the desert is satisfied with dew by Thy blessing” (Psalm 65:11).

On this day also Job the righteous man washed in the water of the Tekaze and was healed of all his sickness.  And the people were in the habit, when the river Tekaze was full of water, of dipping themselves in the new water, whereby they were blessed for all the rest of the year.

On this day died the holy Apostle Bartholomew, who was one of the Twelve Apostles.  To this apostle the lot fell that he was to go to the city of El-wah (the great Oasis, Al-Hargah).  He and Peter went together to the people there, and they preached to them, and called them to the knowledge of God.  After that they performed before them signs and great wonders, which terrified their hearts.  After this Peter contrived to go into the city, and there he sold Bartholomew to be a slave, and Bartholomew worked in the vineyard with his master.  And when he was preparing the young plants for planting out, they burst into flower and bore fruit immediately.  When the son of the governor of that city died, Bartholomew the apostle raised him up from the dead.  And all the people believed, and Bartholomew strengthened them in the knowledge of God.  After this our Lord Jesus Christ commanded him to go to the city of Barbar (i.e. the city of the Barbarians), and He sent to him Andrew the apostle with his helper to help him.  And the people of that city were exceedingly wicked, and they would not receive the apostles who were working before them signs and wonders.  And God commanded one of the Dog-faced cannibals to submit to the apostles, and not to resist them in anything, which they ordered him to do, and they took him with them to that city.  And the men of that city brought out wild beasts against the apostles to eat them up, and straightway that Dogface rose up against those wild beasts, and rent them asunder, and he also slew a great many of the men of that city.  Because of this all the people were afraid and they turned, and did homage at the feet of the apostles, and they submitted to them, and they entered the faith of our Lord Jesus Christ–to Him be glory!  And he appointed priests over them, and built churches for them, and the apostles left them praising God.

And Bartholomew the apostle departed to the cities, which were on the seacoast, whereof the people knew not God, and he preached unto them and converted them to the knowledge of God.  And they believed on our Lord Jesus Christ.  And Bartholomew the apostle commanded the men to be pure, and to be remote from fornication.  When Agrippa the king heard of him he was exceedingly angry with him, and he commanded his servants to put the Apostle Bartholomew in a hair sack and to fill the sack up with sand, and to cast him into the sea; and they did so.  And thus Bartholomew consummated his martyrdom.

On this day died the holy father Abba Melyos, Archbishop of the great city of Alexandria, the third from Mark, the apostle and evangelist, and this archbishop was appointed in the twelfth year of the reign of Vespasian the Emperor of Rome, fifty-four years after the Ascension of our Lord Jesus Christ.  He pastured and guarded the flock of our Lord Jesus Christ nobly, and he sat on the Episcopal throne twelve years.  And he pleased God and died in peace.

And on this day is celebrated the festival of Raguel, the angel, one of the nine archangels, who informed Enoch concerning the fire which burneth, and the destruction of the world; and he is the angel of lights.  May the intercession of this angel be with us all.