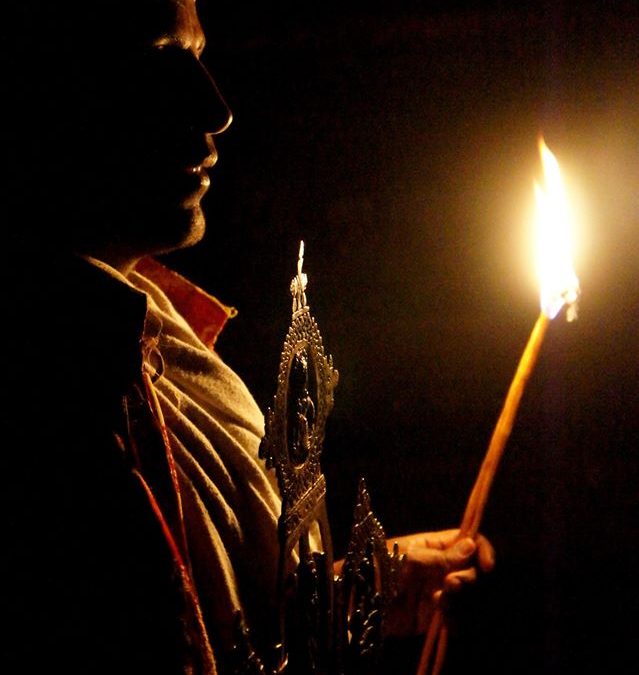 On this day died the great Prophet Isaiah, the son of ‘Amos, Manasseh having sawn him in twain with a wood saw.  This prophet prophesied in the days of the reigns of five kings, that is to say Uziah, and Jotham, and Ahaz, and Hezekiah his son, and Manasseh the son of Hezekiah.  And he prophesied to Ahaz, saying, “A virgin shall conceive, and she shall bear a son, and his name shall be called ‘Emanuel, the interpretation of which is, ‘God with us.’  And it shall come to pass that he shall teach the nations, and shall bring them into his kingdom and into his faith, and he shall destroy the altars of the Jews and their priests.  And offerings of praise, bread and wine, shall be received from priests who shall be from among the people” (Isaiah vii, 13 ff.).  And he prophesied to Hezekiah and encouraged him when Sanakrem (Sennacherib) the King of Persia (sic) besieged Jerusalem, and informed him that God would blot him out because of his blasphemy against Him (Isaiah xxxvi).  And that night God sent Michael the archangel to the camp of Sanakrem (Sennacherib), and slew of the soldiers 180,000 and 5000 men, and those who remained [alive] left the camp and fled.  And when Hezekiah the king was sick, God commanded him by the tongue of this prophet to set his house in order for he was to die.  And when Hezekiah prayed to God, He sent unto him Isaiah the prophet who made known to him that God added to his days fifteen years.  And God showed him a sign so that he might be sure that what the prophet had told him was true (Isaiah 38).  And Isaiah prophesied concerning the blotting out of the children of Israel, and he made manifest that only a few of them would believe him.  And God made rain to fall by reason of his prayer, when the people obeyed.  And on one occasion when he was thirsty God made to flow the spring of water of Siloam.  And Isaiah prophesied also to Manasseh the king, the son of Hezekiah, who established the worship of idols, and he rebuked him because of his evil deeds.  For this reason Manasseh the king was wroth with him, and he sawed him in twain with a wood saw from his head to his feet.  And all the days of the prophesying of this prophet were seventy years, and more than that.  And he prophesied in the nine hundred and thirteenth year before the coming of Christ our Lord.

And on this day also the holy woman Baslantya in the days of Diocletian, the emperor who denied [Christ].  This holy woman was a Christian, and when she was nine years old the deniers of our Lord seized her and bound her hands and her feet, and cast her into the fire; but she was saved from the fire by the might of God.  When she was thirsty she made a petition to God for water, and He caused water to come down and she drank.  Then she committed her soul to the hand of God and cast herself into the fire, and she finished her testimony.

And on this day also are commemorated James the monk, and ‘Atimos the bishop, and Baslis, and ‘Arontos, and Rawrewo, and Sawlwas, and Sawa, martyrs of God.