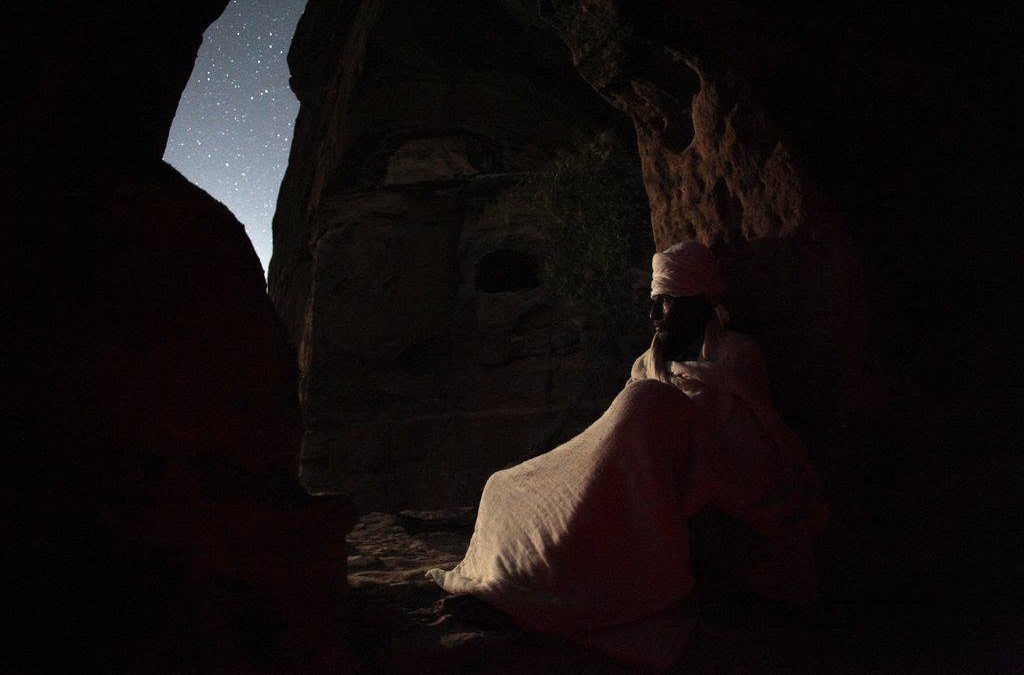 On this day Saint Zacharias the priest, the son of Berachiah, was martyred by the hand of Herod the king. When the angel Gabriel announced to this priest the birth of John his son, he did not believe his word.  Because of this Gabriel said, “Thou shalt be dumb until the child is born,” and he was dumb until the child was born; but when he was born, he spoke and he glorified God, and he wrote and said, “His name is John.”  And the Holy Gospel beareth testimony concerning him, and shows that he and his wife were righteous, and that they walked in the Law of God without blemish.  When our Lord Christ was born, and the men who were soothsayers came to worship Him, Herod was troubled and feared for his kingdom.  For this reason he sent and slew all the children of Bethlehem of Judah whose days were two years and less than two years, and Herod thought that among their number he would kill Christ.  And the angel of God appeared unto Joseph in a dream, and he took our Lord and Mary His mother and they came to the land of Egypt.  And the mother of John took him, and went out into the fields, and fled into the desert of Sina, and she dwelt there bringing up her child for seven years.  Then the mother of the boy died and left her child alone in the desert, and there he stayed until his showing himself to Israel.

When Herod killed the children he thought in his heart that John was Christ, and he sent his lictors to seek for him with his father Zacharias.  And Zacharias said unto him, “I know neither where the boy is nor his mother.”  And Herod said unto him, “If thou dost not bring thy son unto me I myself will slay thee”; but Zacharias was not afraid of him.  And Herod told his soldiers to slay Zacharias, and they slew him between the sanctuary and the altar; and God hid his body and his blood became like unto stone.  And when the priests and the people were coming to prayer according to their wont, one of the priests arrived and went into the sanctuary, and he found the blood and he heard a voice which cried out in the altar, saying, “Zacharias the son of Berachiah hath been slain”; and his blood continued to cry out until it was avenged.  Now this Zacharias, the son of Berachiah, was not one of the twelve sons of the prophets, for that Zacharias was not killed, but died in the country of Urati where his body was found in a perfect state and undecayed, and they built a church for it.  As for this holy man Zacharias, [the father of John,] his body was never found, but his blood became a witness of his slaughter.  And it is also said that when Herod slew the children a certain Jew said unto him, “Behold, a son hath been born unto Zacharias even as the angel of God told him, peradventure he is Christ.”  And Herod sent his lictors to slay the child John.  And Zacharias said unto them, “I have taken the child to a certain place; come ye with me and take him from that place.”  And the lictors went with him until he brought them into the sanctuary.  And he set his son John on the wing of the altar, where the angel of God had announced [his birth], and immediately the angel of God snatched away the child, and carried him off to the desert Zifata.  And when the lictors could not find the child they slew Zacharias his father.  Therefore did our Lord say unto the Jews, “The blood of Zacharias whom ye slew shall come upon you,” for it was the Jews who were the cause of his slaughter.

And on this day also died Moses the prophet and righteous man, and head of the Prophets.  This prophet labored with the people of God, and he suffered tribulation with them until [his] death and he delivered up his soul.  This man it was who worked signs and wonders in Egypt and in the sea ‘Eritrea (Red Sea), and he was not well pleased to be called the “son of Pharaoh’s daughter,” who brought him up, when his parents had cast him into the river of Egypt because of the decree of Pharaoh who commanded that all the male children of the Hebrews should be destroyed.  When the daughter of Pharaoh the king found him she took him and reared him as if he had been her own son.  And when he was fully forty years old he saw an Egyptian slay one of the Hebrews, and straightway he avenged the Hebrew and slew the Egyptian.  On the following day he saw two other men fighting together, and he attempted to make peace between them.  And he who was in the wrong rose up and said unto him, “Dost thou wish to slay me as thou didst slay the Egyptian yesterday?”  And because of this Moses fled to the land of Midian and there he married a wife and begot two sons.  When he was eighty years old there appeared unto him a vision and a fire in the Patos tree, and when he came to look and to learn [what it was], God spoke unto him from out of the tree, and commanded him to depart to Egypt, and to bring out the Children of Israel from there.  Then God worked ten plagues with His own hands upon the Egyptians; the first was the river, which became blood, and the last was the slaughter of the first born of the Egyptians.  After this He brought the people out of the land of Egypt, and He divided the sea ‘Eritrea (Red Sea) and made them to pass through it, and He brought back the water of the sea over their enemies, Pharaoh and his host, and drowned them in the sea ‘Eritrea (Red Sea).

And He brought down for them “Manna” in the Arabian Desert forty years, and He made water to flow forth from a rock; all these beautiful things did Moses the prophet perform for them.  And they used to curse him, and many times they wished to stone him, but he was longsuffering with them, and he prayed to God for them, and because he loved them greatly he said unto God, “If Thou wilt not forgive this people their transgression, then blot out my name from Thy book” (Exodus xxxii, 32).  And the Book is a witness concerning him – that he spoke with God five hundred [times], and the words testify [that God talked with him] as a man talketh with his friend.  And his face shone with the light of the glory of God, and he was obliged to veil his face so that the children of Israel might not die when they looked upon it.  When he was fully one hundred and twenty years old God commanded him to deliver the people over into the hand of Joshua, the son of Nun, his disciple, that he might shepherd them.  And he called Joshua and commanded him with the command of God and the Law, and he delivered the people into his hand, and informed him that he was to bring the people into the land of [their] inheritance.  And after Moses had made the Tabernacle of Witness and everything which was in it by the command of God, he died in the mountain and was buried there, and God hid his body so that the children of Israel should not take it and worship it.  And the Book testifieth among the children of Israel there never rose up a prophet who was like unto Moses.  When Satan wished to uncover (or reveal) the body of Moses, Michael the archangel rebuked him, and prevented him from doing so, even as Jude the apostle testifieth in the book of the apostle (verse 9).  And the children of Israel mourned for Moses three days.

And on this day also Dimasyos (Dimasius) became a martyr.  This holy man was from the city of Derseba on the borders of Dantu to the north of the land of Egypt, he loved the Church, and the poor, and he visited the sick.  And a man who was shining with light appeared unto him and commanded him to go and receive the crown of martyrdom, and he made covenants with heaven and rejoiced greatly.  And he forsook his father and went forth from his city, and he prayed to God to give him help during the torture for His holy Name’s sake.  And he came into the city of Athribis and confessed Christ before the governor, who tortured him severely and sent him to Lucianus the governor of the city of Alexandria.  And whilst he was in the boat, our Lord Christ appeared unto him, and comforted him, and encouraged him, and promised him everlasting happiness; and his soul rejoiced and was exceedingly glad.  And Lucianus tortured him very severely and then cut off his head with a sword; thus Dimasius received the crown of martyrdom in the kingdom of heaven.  And the people of his city came and took away his body, and paid great honors to it, and through it signs and mighty wonders took place.

And on this day also are commemorated:  Lucianus the martyr, ‘Ermeyas (Jeremiah), and the nobles ‘Andewa and ‘Elyanos, and ‘Ammon the monk.