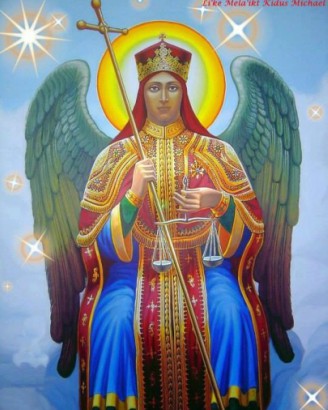 On this day is commemorated the glorious angel Michael the archangel.  On this day God, to Whom be glory, sent him to Isaiah the prophet, the son of Amos, and He had mercy upon him, and showed compassion unto him after He had been wroth with him for twenty-eight years.  And God commanded him to go to Hezekiah the king, and to tell him that God would heal him of his sickness, and had added fifteen years to his days, so that he might marry and beget Manasseh.

And on this day took place the General Council of the Saints, two hundred bishops, in the city of Ephesus.  This was the third of the great General Councils, and its bishops assembled in the twentieth year of the reign of Theodosius the Less, and son of Arcadius, the son of Thodosius the Great.  They assembled because of the error of Nestor (Nestorius) who was Archbishop of Constantinople, and who said, “Our Lady, the Virgin Mary, did not give birth to God in the flesh, but to a mere man, and that afterwards the Son of God dwelt in him, and not that He dwelt and was one with him, but that He dwelt [in him] according to his desire and pleasure only; therefore Christ had Two Natures and Two Existences.”  This is the wicked belief of Nestorius the infidel.  Because of him these fathers, two hundred bishops, were convened, and they debated the matter with him, and they urged strongly and showed him that He Who was born of our holy Lady Mary the Virgin, was God Who had become man.  And they brought before him the testimony of the words of the angel Gabriel when he said unto our Lady Mary in the holy Gospel of Saint Luke (1:28), “God be with thee! He Who shall be born of thee is holy and shall be called the son of the Most High.”  And they brought before him also the words of Isaiah (vii, 14) the prophet in his prophecy, “Behold a virgin shall conceive, and she shall bear a son, and his name shall be called Emmanuel.”  And again he saith, “There shall go forth from Jesse a root, and he who shall arise from it shall be the hope of the Gentiles” (Isaiah xi, 1, 10).  And moreover, our father Saint Cyril, Archbishop of the city of Alexandria, rebuked him, and admonished him, and said unto him, “Natures cannot be separated after they have become one in their unity, on the contrary, and we believe and declare that the Word of God that became man is One Nature only.”  And Nestorius the unbeliever would not believe this, and he would not turn from his unbelief, and the whole General Council rebuked him and threatened him that they would cut him off from his priesthood and office unless he turned from his evil counsel.  And he would neither hearken now accept the words of the whole Council, and they therefore cut him off from his priesthood, and they anathematized him, and excommunicated him, and drove him forth from the Council into Upper Egypt, where he died an evil death and departed into Sheol for ever.  And these fathers, the two hundred bishops, confirmed the belief and made known in writing the declaration of this Council, and they said, “Our Lady Mary, the holy Virgin, the God-bearer, brought forth the Word of God made flesh.”  And they drew up the Canon and laid down the Law, and they signed it with their own hands, and gave it to the faithful unto this day.  And if it be said that in these days the Nestorians do not believe in the faith of Nestorius, the unbeliever, we reply that this is due to the fact that the Nestorians have mingled with the Jacobites who are in Syria, and in the country of the East generally, and that some of them have turned from their evil counsel.  And we will beseech God to guide us in the way of salvation – to Whom be praise and glory forever and ever!  Amen.

Salutation to ‘Aflahos the martyr, and to those who were martyred with him.

And on this day also is commemorated the translation of the bodies of Saint ‘Aflahos the martyr and his companions in the city of Alexandria.

And on this day also are commemorated Luras (Luyuras) and Galanicus (Calanicus) the martyrs, and Joachim and Hanna, and on it a festival is held in Rome in honor of Stephen (protomartyr).