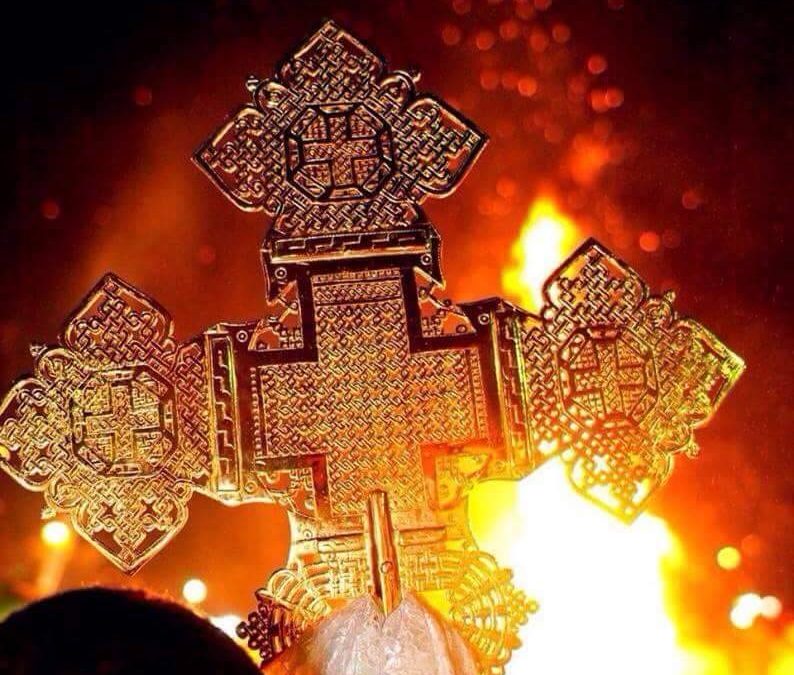 On this day died the holy father, Abba Agathon of the pillar.  This holy man came from the city of Tenis (Tanis, or the Field of Zoan, i.e. San Al-Hagar) in the north of the land of Egypt.  His parents were righteous folk, and fearers of God, and they loved to give alms and gifts to the poor and needy.  The thoughts of his mind tended to monasticism, and they moved in his heart continually.  The name of his father was Matra, and the name of his mother was Marya.  When he was thirty-five years old he was appointed priest, and straightway he devoted himself continually to the Church.  And he entreated God by day and by night to make straight for him his departure from this world, and he departed to the desert and became a monk.  And the Lord Christ prepared the means for him, and he went out from his city, and came to the city of Mareotis, and thence he departed to the Scete desert.  And the angel of God appeared unto him in the form of a monk who journeyed about with him everywhere in the desert and brought him to the monastery of Saint Abba Macarius in Scete.  And Saint Abba Agathon came to the holy elders Abba Abraham and Abba Ga’Argi, and he became their disciple and lived with them for three years.  After this they set him before the sanctuary and before the abbot, Abba John, and they remained three days in prayer over his garb of monasticism, and they arrayed him in the garb of angels.  From that hour he became a devotee of God, and he fought a great fight with fasting and prayer, continually, day and night; and he slept on the ground without a mattress, and at length the skin of his body clave to his bones.  And he read continually the history of the striving of Abba Simon of the pillar (Simon Stylites), and he was always envious of his striving.  And he meditated in his heart, shutting himself up, and he took counsel with the holy fathers concerning it, and they said this counsel is good; and he was blessed by them and they prayed over him.  And he went out of the desert, and came nigh unto the world, to the city of Saka (i.e. Sakha, in the province of Gharbiyah), and he dwelt in a little church.  And the believers built him a pillar there, and he went up on it and stood on it, and labored strenuously in the ascetic life for a space of fifty years.  In his days there appeared a man in whom was a filthy Satan and who led many people astray.  And that man dwelt in a church, and the people used to throng about him to hear his doctrine, and with them they carried branches of trees.  And Abba Agathon sent and had him brought to him, and he prayed over him, and drove out from him the devil who used to address the people through him.  Similarly, a certain woman used to say, “Minas the martyr holdeth converse with me.”  And she commanded her followers, and they dug a pool of water in the name of Abba Minas the martyr, and [pretended that] all those who bathed therein were healed.  And Saint Abba Agathon prayed over that woman until he cast out from her that unclean spirit.  And Saint Abba Agathon commanded the men of that city to fill up that pool.  And there was also another man who used to raise up those who were mad and who were possessed of the devil, and when he beat them the devil used to leave them for a short time; and very many of those who were possessed of devils gathered together to him.  And Saint Abba Agathon sent messages to him very often bidding him to come to him, and he would not obey him and neither came to him nor forsook his error.  And when the governor of that city passed by, those who were possessed of devils cursed him, and for this reason the governor took that man, and punished him with exceedingly great severity, and he died straightway during his punishment.  And another man, a priest, fell into fornication with a woman in the church, and polluted (or destroyed) his portion of it; and the people took him and brought him to Saint Abba Agathon, and he prayed over him and God healed him.  And the holy man commanded that priest to take good heed that he did not minister in the priesthood during all the remaining days of his life.  And the holy man Agathon worked many miracles, and he healed very many sick people.  And there appeared unto him in the forms of angels very many Satans who sang unto him very sweet songs, and ascribed blessing to him, but by the might of Christ, to Whom be praise, he knew their guile, and he made over them the sign of the Glorious Cross, and they fled from before him speedily.  And when God wished to make him to rest from the toil of this world, Agathon fell sick of a slight illness, and he delivered up his soul into the hand of God.  Now very many people used to gather together to him, and he would teach them the way of God and would heal them of their sicknesses through his prayers.  When they found out that he was dead they wept bitterly because they had lost their father who was wont to comfort them, and because they were the orphans of this glorious father.  Now all the days of the life of this holy man Abba Agathon were one hundred years.  He dwelt in the world forty years, and in the desert ten years, and he toiled in ascetic labors and lived upon a pillar for fifty years.

And on this day also are commemorated Makari (Macarius) the martyr, and Bartholomew, and ‘Awedra, and Nasen (Naso), and Degana the priest.

And on this day also died Abba Degana the priest.