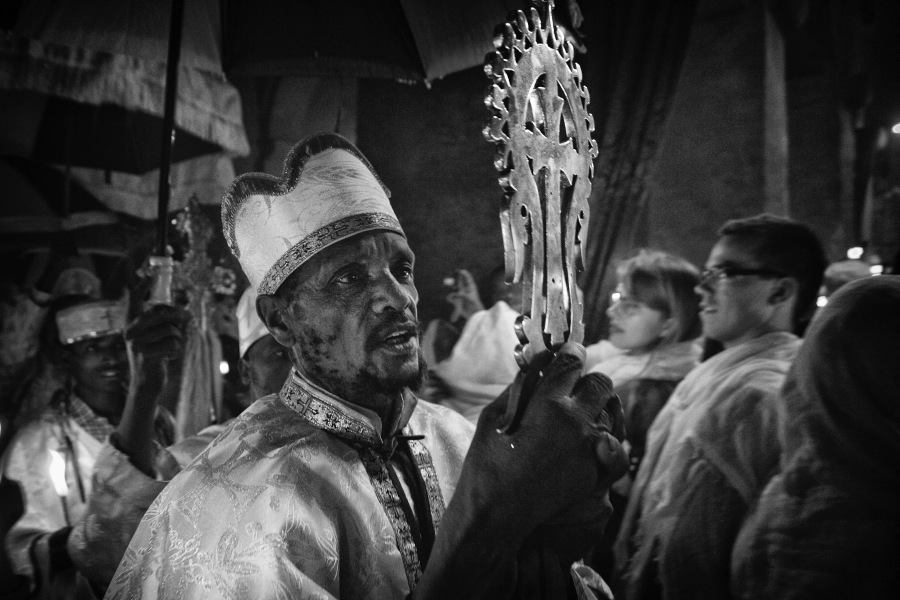 On this day the translation of the body of Saint Stephen the archdeacon and protomartyr took place.  And how did the translation take place?  It took place after very many years had passed since his death, and more than three hundred years after the reign of the righteous Emperor Constantine who worshipped God nobly, and after the revelation of the Right Faith.  There was a certain man who lived in the garden, which was nigh unto the place where the body of Saint Stephen was, and that garden was called the “garden of Gamaliel,” and was nigh unto Jerusalem; and the name of that man was Lucianus.  And Saint Stephen the fighter appeared unto him several times in dreams, and said unto him, “I am Stephen,” and he informed him that his body was buried in that place; and that man Lucianus went and told the bishop of the city of Jerusalem, and when the bishop heard this thing he rejoiced exceedingly.  And he rose up straightway and took with him two bishops, and certain men of the church, and they came to the place wherein the body of the saint lay, and they dug into the ground there.  And a mighty earthquake took place, and the coffin wherein was the body of the holy man was revealed.  And there ascended from it an odor, which was exceedingly sweet, and they heard the voices of angels praising God and saying, “Glory to God in the heavens, and peace upon earth, His good pleasure to men.”  And they praised and sang in this wise three times.  And the bishops and the priests bowed down before the coffin containing the body of the holy man, and then they bore it away with songs and hymns and many brightly shining lamps until they brought it into the citadel of Zion.  And after this, a certain man whose name was Alexander, and who was a native of Constantinople, and who lived in Jerusalem, built a beautiful church of Saint Stephen, and he removed the body of Saint Stephen into it.  Five years after this Alexander died, and his wife buried him by the side of the coffin of Saint Stephen.  And when eight yeas more had passed the wife of Alexander decided to go to the city of Constantinople and to take the body of her husband with her.  And she came to the place wherein she had buried his body by the side of Saint Stephen, so that she might take her husband’s body and bury it in the church, which Alexander had built in Constantinople in honor of Saint Stephen.  Now her husband’s coffin was like unto the coffin containing the body of Saint Stephen–and by the will of God she took the coffin wherein was the body of Saint Stephen, and carried it away to the city of Ascalon, and there she embarked with it in a ship to go to the city of Constantinople.  As they were sailing over the sea she heard singing and many praises coming from the coffin, and she marveled exceedingly.  And she rose up that she might look at that coffin, and she knew that it was the coffin wherein was the body of Saint Stephen, and she understood that this had happened through the Will of God, to Whom be praise!  She was unable to return to Jerusalem, and she gave thanks unto God the Most High, because of what He had done unto her.  When that woman arrived in the city of Constantinople, she went to the emperor and made known unto him the history of Saint Stephen, and how signs had taken place, and how he had arrived at the port of the city of Constantinople.  And the emperor and the archbishop, and priests, and the people of the city went forth and they came to the body of the saint, and they carried it upon their heads with singing and many hymns, and with joy and gladness until they brought it to the royal palace.  And both in the ship and in the royal palace God made manifest many signs.  And they laid the body of the holy man upon a wheeled cart drawn by two oxen, and when they came to the place which is called Constantinople, wherein the holy man wished them to lay his body, the oxen stood still and would not go any further and they stood there.  And when they beat the oxen they heard a voice, which came from one of the oxen, saying, “It is meet for them to deposit the body of Saint Stephen in this place.”  And all those who saw and heard this praised God, and they knew that He Who had made the unclean she-ass of Balaam to speak was He Who had made to speak the oxen which were carrying the body of Saint Stephen.  And the emperor commanded his people to build a beautiful church for him. And they built a beautiful church, and they laid therein a gem, a pearl of great price, a holy thing, that is to say the body of that holy and blessed man Stephen the apostle, the archdeacon and protomartyr.

And on this day is commemorated the righteous father, Abba Peter of the town of Taraw (Daraw in Upper Egypt?).  This holy man was blessed before God from his mother’s womb.  When he grew up to man’s estate he was perfect in heart, and he labored strenuously in ascetic works, and he served God with fasting and prayer day and night continually.  He never ate the food, which is usually eaten by men, but he lived upon the small quantity of grass, which he found in the desert, and because of his lack of human food he resembled the angels in his strife.  Moreover, his food was the repetition of the Name of our Lord Jesus Christ by night and by day ceaselessly.  And it was meet for him to walk on his feet into the stream which is called ‘Alon without wetting them, for his body had become exceedingly dry (or hard) through the great tribulation caused by the heaviness of the iron which he wore on his body all the days of his life; for he was like unto a beast and not a man.  And he pleased God with this manner of striving, and God healed him.