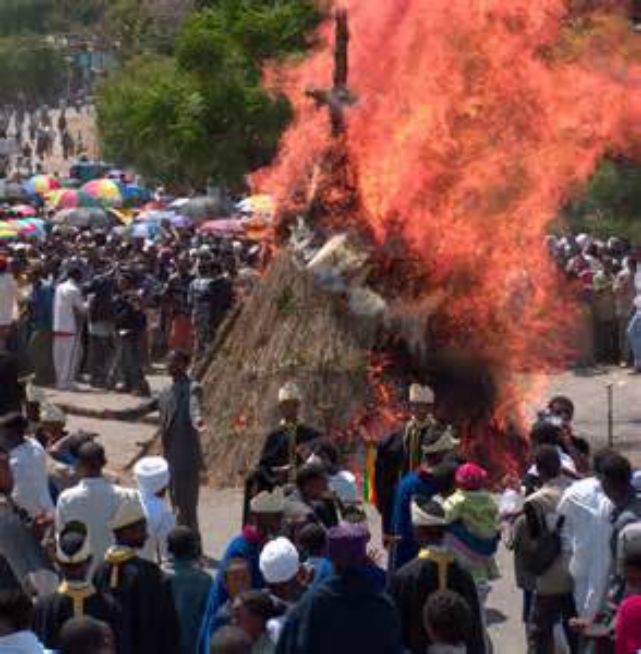 On this day took place the consecration of the Church, and the Sanctuary, and the grave of our Lord Jesus Christ, to Whom be praise, in the holy city of Jerusalem, and of all the holy places which ‘Eleni (Helena), the empress, laid bare.  And this took place in the twentieth year of the reign of her son Constantine, after he had gathered together the Council of Three Hundred and Eighteen Saints in the city of Nicea.  And the blessed woman ‘Eleni (Helena) took a large sum of his money, and she said unto her son Constantine, “I wish to be blessed by God, and I will go to the holy city of Jerusalem, and I will seek for and discover the Wood of the Life-giving Cross.”  And Constantine rejoiced at these words, and he sent soldiers with her; and he gave her much money and apparel made of costly silks threaded with gold.  When she arrived in the city of Jerusalem, and had knelt in prayer in certain of the holy places, she made enquiries about the Wood of the honorable and Life-giving Cross.  And with much toil and tribulation she found the Wood of the Cross, and she praised it with great praises, and she paid unto it very great reverence and honor.  Then she commanded her men to build the altar of the sanctuary, and [shrines at] Golgotha, and Bethlehem, and the cave wherein our Lord Jesus Christ was born, and the fortress of Zion, and Gethsemane wherein was buried the body of our Lady the holy Virgin Mary, and the Mount of Olives, and all the holy places; and she commanded [the builders] to decorate them with pearl, and with gold, and with silver.  Now there was in Jerusalem a certain bishop whose name was Abba Macarius, and he gave her counsel, saying, “Do not thus, for after a few days [foreign] peoples will come and will rule over this country, and they will take possession of this place, and will lay it waste, and will seize whatsoever is made of gold and silver and precious stones.  But it is meet that you should build a good, strong building which can neither be overthrown nor torn up from the foundations.  And the remainder of this money give unto the poor and the needy.”  And the Empress “Eleni (Helena) accepted his words and delivered much money into his hand, and she commanded all the nobles to build [a building of this kind], and to obey Abba Macarius the bishop in everything which he ordered them to do in the matter of the building.  When the Empress ‘Eleni (Helena) returned to her son Constantine and told him what she had done in Jerusalem, he rejoiced exceedingly, and he sent a further large sum of money, and overseers were appointed over the building.  And the emperor commanded them to pay the workmen and all those who served in the work of building their wages daily at eventide without fail, for the emperor feared lest they should suffer and lest they should complain if their wages were not paid to them, and lest God should be angry with him because of their complaint.  And when the building of the holy places was finished in the third year of the reign of the righteous Emperor Constantine he sent holy vessels and apparel made of silk and gold which was exceedingly costly.  And he sent messages to the Archbishop of the city of Constantinople to take his bishops, and to Athanasius, the Archbishop of the city of Alexandria, to take the bishops of his diocese, and also to the Archbishop of the city of Antioch, and he commanded them all to gather together in the city of Jerusalem and to consecrate the sanctuary and all the altars of the places which had been built [by ‘Eleni (Helena)].  And they all assembled in the city of Jerusalem, and they tarried there until the seventeenth day of the month Meskerem, by which day they had consecrated the sanctuary and all the altars of the places (i.e. shrines), which had been built.  On that day there was joy, the like of which had never before existed.  They performed the appointed service, and they consecrated the Holy Offerings, and they partook of the Holy Mysteries, and a great light appeared, and many signs [were wrought] on that day, the sixteenth of Meskerem.  And they marched round into all the holy places with the Honorable Cross, and they worshipped God therein, and they received the Holy Mysteries, and they adored the Honorable Cross and sang litanies thereto, and [then] they departed to their countries in peace.

And on this day also died Obit, the son of Gabael of the seed of ‘Asael, of the tribe of Naphtali, who was carried off into captivity in the days of ‘Anemesor, the King of Persia (sic), he was a native of Tabes, on the right hand of Kades, which is Naphtali in Galilee, which is above ‘Aser.  Tobit walked the path of righteousness and integrity all the days of his life.  And the alms were many which he made to his brethren, and to his kinsfolk who went to the country of Persia, and all the people who had apostatized and who offered sacrifice to Baal and the Calf.  And Tobit went frequently to Jerusalem, and he took the wool of his flock with him, and the tenth of his crop, and he gave one-third to the poor.  When all his brethren were taken captives to Nineveh they ate with the Gentiles, but he restrained himself from eating because he remembered God with all his heart.  One day he found the dead body of a man in the market place, and he rose up although fasting and brought it into a house until the sunset, and when the sun had set he dug a hole in the ground and buried him.  That night he lay down to sleep against the wall of his garden, and he did not know that there were birds [nesting] in the wall.  And when he uncovered his face these birds voided warm dung into his eyes, and a smoke went forth through his eyes and there was no man who could give him relief.  And Tobit entreated God, saying, “Remember me, O Lord, and look upon my miserable estate, and remember not my sins nor the sins of my fathers, for Thou hast made us to be led away into captivity and to be scattered.  And now, even according as it pleaseth Thee deal with me before Thee, and command that my earth may return so that I may dissolve and become dust; for it is better for me to die than to live.”  And on that day the evil spirit Asmodeus found Sara, the daughter of Raguel, for he had married her to seven men, and when these men approached her he slew them.  At length the handmaidens of her father reviled and abused her, and she continued to weep and pray to God that He would save her from their abuse; and her prayer and the prayer of Tobit were heard before the Majesty, praise [be unto Him], and Rafael [was sent to heal them both].  And Tobit remembered the silver, which he had committed to the care of Gabael, and he called his son Tobias, and he said unto him, “Seek out for thyself a hireling who shall go with thee to Gabael that he may bring back the money which I committed to his care before I die.”  And Tobias found Rafael, who was in the form of a hired servant, and he went with Tobias, who named him “Azarias.”  And they journeyed along the road, and they arrived in the evening at the Tigris, and Tobias went down to the river to wash, and a fish leaped out upon him.  And Rafael said unto Tobias, “Seize him, and take out his heart, and his liver, and his gall”; and Tobias did as Rafael had commanded him.  And when they arrived in the house of Raguel, Sara received them, and Tobias desired her, and he spoke unto her father so that he might give her to him; and Raguel said unto him, “I have married her to seven men, and all of them have died”; and Tobias said, “The Lord’s will be done.”  And when they brought Tobias and Sara into the marriage-chamber, Tobias remembered the words of Rafael, and he burned away in smoke the heart and the gall of the fish, and the devil fled from Sara.  And he returned with her to the house of his father, and when Tobit had received him Tobias smeared his father’s eyes with the gall of the fish.  And when Tobit rubbed his eyes and there removed itself from his eyes as it were smoke, and he saw his son, he rejoiced and he prophesied concerning the sufferings of Christ, saying, “Blessed be all those who sorrow for Thy suffering, for they shall rejoice in Thee when they see all Thy glory.”  And again he said, “The walls of the Jerusalem which is in the heavens shall be built of sapphire, and emerald, and precious stones, and its tower and its gates shall be of pure gold.  And the court thereof shall be made of beryl and carbuncle and sapphire, and all its paths shall say ‘Hallelujah.’”  And he also prophesied that the Israelites who were captives in Babylon should return, and should build Jerusalem with glorious mason’s work.  And Tobit commanded his son Tobias to depart from Nineveh, for he knew that the spoliation thereof which Jonah the prophet had prophesied would take place.  And he said unto his son, “See my son that thine alms do save thee and justify thee”; and with these words his soul went forth into its rest in the one hundred and fifty-eighth year of his age; and Tobias buried him with honor.

And on this day also are commemorated Warkela, and Simeon, and Markenos (Marcianus) [and ‘Azyanos, and Hali, and Ronikos], and Lucianus, and ‘Azremanos, and Peter, and Hannah, and Abba Agathon who stopped his mouth with a stone.