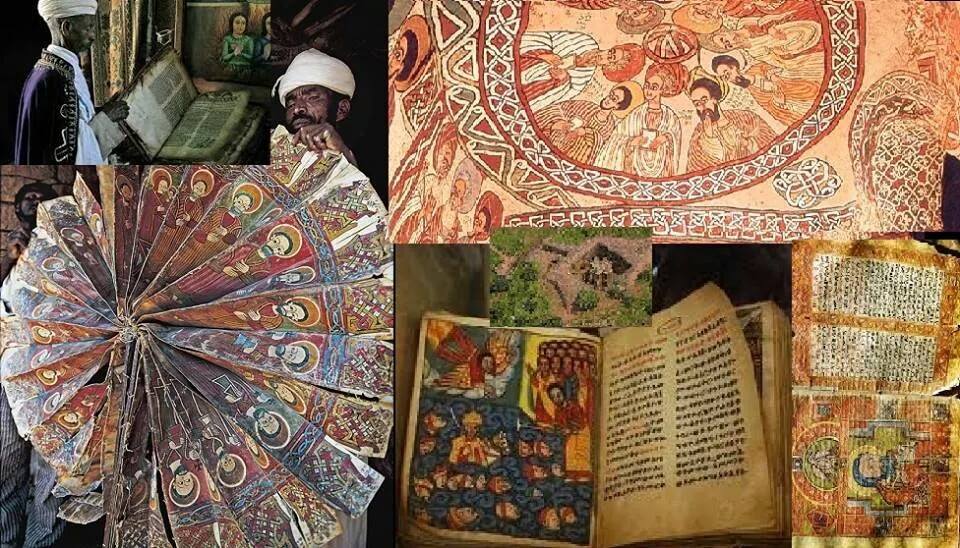 On this day died Eustathius, a teacher of the faith and a preacher of the Gospel.  The name of the father of this holy man was Christos Mo’A, and the name of his mother was Sena Haywat; and they were both righteous and fearers of God, and they walked in all His judgments.  And when Christos Mo’A, after the glad tidings of an angel, begat this child he called him Ma’Akara ‘Egzi’E.  When he grew up he taught him the Psalms of David and the Books of the Church.  Then he took him to the monastery of Abba Zacharias, his mother’s brother, who when he saw him knew that the grace of God was dwelling upon him, and he taught him all the rules of monasticism, and he arrayed him in the apparel of the angels.  And the young man fasted and prayed with such intense devotion that the elders of the monastery marveled at the sternness of his strife; and he was girded with wisdom and knowledge.  After a short time he was made a deacon, and he ministered in the church like Stephen the archdeacon.  And our Lord Jesus Christ appeared unto him with Michael and Gabriel, and He embraced him and breathed into his face the Holy Spirit.  And He said unto him, “O my beloved Eustathius, I have chosen thee from thy mother’s womb, and heave appointed thee to become a teacher of many nations from Ethiopia to Armenia.  And thou shalt preach the Gospel without fear and trepidation.  He who heareth thee heareth Me; he who rejecteth thee rejecteth Me.”  When our Lord Jesus Christ had said this unto him He went up into heaven.  And Saint Eustathius went to the bishop and was appointed priest, and he began to preach the faith of the Gospel.  At length very many men gathered together to him, and they became monks through him and they became disciples [of him], now the greatest of them was Abba ‘Absadi, and he turned many from their iniquity, and at length they forsook their evil works.  And his doctrine filled the whole earth, and in his days the honoring of Sabbaths and days of festival was established, and he turned not aside from [the ordinances of] the Apostles, neither to the right hand nor to the left.  And he made two pilgrimages to Jerusalem, and God made manifest through him signs and wonders which were innumerable in opening the eyes of the blind, and in healing the paralytics, and in casting out devils.  Then he decided that he would go to Jerusalem by the will of God, and he gathered together his sons, and he laid upon them the charge of keeping all the canon of the monks, and of keeping themselves from mingling with the pagans; and he appointed his son ‘Absadi chief over them.  And he went to Jerusalem and kept the Sabbath as he went, and he taught the faith of Christ.  And he came to the Archbishop ‘Abba Benyamin and was blessed by him, and they conversed together on matters of the Faith.  Then he went down to Jerusalem and was blessed in the holy places, and was baptized in the Jordan.  Thence he departed to Armenia, and having arrived at the sea of Jericho he asked the sailors to allow him to embark in a ship.  And when they prevented him from doing so, he cast his head-fillet into the sea, and said a blessing over it in the Name of the Trinity, and made over it the sign of the Cross.  Then he got up upon the fillet as upon a ship, and two angels acted as sailors, and our Lord acted as captain, and they carried over his sons who had no fear of the terror of the sea.  And Eustathius said unto his sons, “Only take heed that ye do not lay up revenge and malice in your hearts; it seemeth to me however that one of you is about to perish.”  And before he had finished uttering these words one of his sons dropped into the sea and was drowned because he was treasuring revenge and malice in his heart.  And by God’s will they crossed over the sea and came to the country of Armenia, and he held converse with the archbishop, and did homage to him, and was blessed by him.  When the archbishop saw him he rejoiced with exceeding great joy, and he received him gladly.  And our father Eustathius continued to teach the men of Armenia the canons of the apostles, which are in the ordinance of the Synod until they were all one brotherhood in doctrine.  When the time for his departure from this world had drawn nigh, our Lord Jesus Christ appeared unto him, and made a covenant with him in respect of those who should invoke his name, and those who should celebrate his commemoration, and those who should do into writing the story of his fight.  And when he died the bishops and priests prepared him for burial with great honor, and they buried him in the church of Mar Mehnam (i.e. Behnam) the martyr, and many miracles happened through his body.

Salutation to Eustathius and to his fillet whereon he crossed the sea.

And on this day also is commemorated Saint Helena, the mother of Constantine the righteous emperor.  In the days of this holy woman the Cross of our Lord Jesus Christ, to whom be praise, was found.

And on this day also died Saint Abba ‘Onorewos (Honorius) the teacher [in the monastery] of Segadj.

And on this day also Saint Mercurius became a martyr.  This holy man was a Persian jester and musician; originally he was a Christian.  When Constantine, the son of Constantine the Great, died, there reined after him Julian the infidel, who slew Saint Mercurius.  Now Julian was the son of Constantine’s sister.  This denier of God worshipped idols, and he afflicted the Christian peoples grievously, and by his means very many became martyrs.  When he was born there were gathered together those who jested and played music, and those who made men laugh, and this holy man Mercurius was among their number.  And the infidel Julian ordered the holy man to show him what the system of Christianity was, and what they did in church.  And Mercurius did according to what the infidel emperor had commanded him, and he made a jest and mockery of all the ordinances of the Church.  And there was very great merriment.  And when he was making a mockery of the ordinance of holy Christian baptism, and was making the sign of the Cross over the water in the Name of the Father and the Son and the Holy Ghost, One God, the Lord illumined the heart of Mercurius, and he saw the Divine Grace of God through heaven, and an exceedingly great light enveloped him.   And straightway Mercurius stripped off his apparel, and went down into the water, and was dipped in the water three times in the Name of the Father and the Son and the Holy Ghost, One God.  Then he went up out of the water, and put on his raiment and confessed that he was a Christian.  And the emperor was wroth with him and he threatened him, saying, “Unless thou doest as I command thee, and unless thou castest incense to the gods, I will torture thee with the greatest severity.  On the other hand, if thou wilt hearken to my command I will give thee very much money and I will honor thee exceedingly.”  And Saint Mercurius answered and said unto him, “If thou wert to give me all the money in this world and the kingdom thereof, I would not deny my Lord Jesus Christ.”  Then straightway the infidel emperor commanded his soldiers to cut off his holy head, and Mercurius received an incorruptible crown in the kingdom of the heavens.

And on this day it is meet that we should celebrate also the festival of the Honorable and Life-giving Cross of our Lord and God Jesus Christ.

Salutation to Jacob the strenuous ascetic!

Salutation to Jacob the priest!

And on this day also is commemorated Saint Stephen the priest, and Niceta the martyr.

And on this day also were found the bones of Thomas and of Archbishop Athanasius; and on this day are commemorated our father the admirable Philotheus [the Thaumaturge], and Abba Nob the anchorite, and the martyrs who were with ‘Aboli – forty men and twenty women.

And on this day also are commemorated ‘Efomya (Euphemia) the martyr, and Abba Finomis, and Selhan, and ‘Akalaeles, and Isaac.

And on this day also took place the miracle which Thomas the apostle wrought when he went to preach the Gospel in the country of India.  Now he was afraid, and he said, “How can I go to India, the country of which I know not?”  Then our Lord Jesus Christ appeared unto him and said unto him, “Fear thou not, for My grace is with thee.”  And whilst he was with our Lord there came a merchant from India.  And our Lord said unto him, “What dost thou want?”  And the merchant said, “I want a carpenter”; and he sold him for three letra of silver.  And he wrote a paper which testified, saying, “I have sold my servant, the son of Joseph the carpenter, to ‘Abenes, a merchant of Gona”; and Thomas’s [new] master took him to the city of the king.  When they drew nigh unto the city they heard [the sound of] organs and pipes, and they said, “What is this?”  And the people said unto them, “The king has made a marriage-feast for his daughter, and he has ordered that whosoever doth not come to the wedding shall be punished.”  And ‘Abenes and Thomas went into the room of the feast, and while the guests ate and drank Thomas the apostle ate nothing at all.  And there he found a Hebrew singing maiden who was singing songs in the Hebrew language.  And whilst the apostle was praying in the Hebrew language one of those who were at the feast struck him; and the apostle said, “I see a hand with the dogs tearing at it”; and the singing woman alone heard him because he spoke in the Hebrew Language.  And the man who smote Thomas went down to the lake (or well) to draw water, and a lion sprang out and slew him and left him lying in pieces.  And a dog seized the right hand and carried it in among the people at the feast, and one said unto Thomas, “Who is dead?”  And he said unto them, “This is the hand of him who struck one who serveth.”  When the singing maiden heard this, she cast sway her tambourine and went and sat at the feet of the apostle, and she said, “I heard thee say unto him, ‘The gods shall tear the hand which smote me.’”  When the people heard this some believed and some did not.  When the king heard this he said unto Thomas, “Come and pray over my daughter, for this day have I given her in marriage.”  And when the apostle had entered the marriage-chamber he prayed to the Lord in the form of Thomas, on behalf of the bride and bridegroom, and admonished them with the words of faith, and they believed the words of the apostle, and abandoned their marriage.