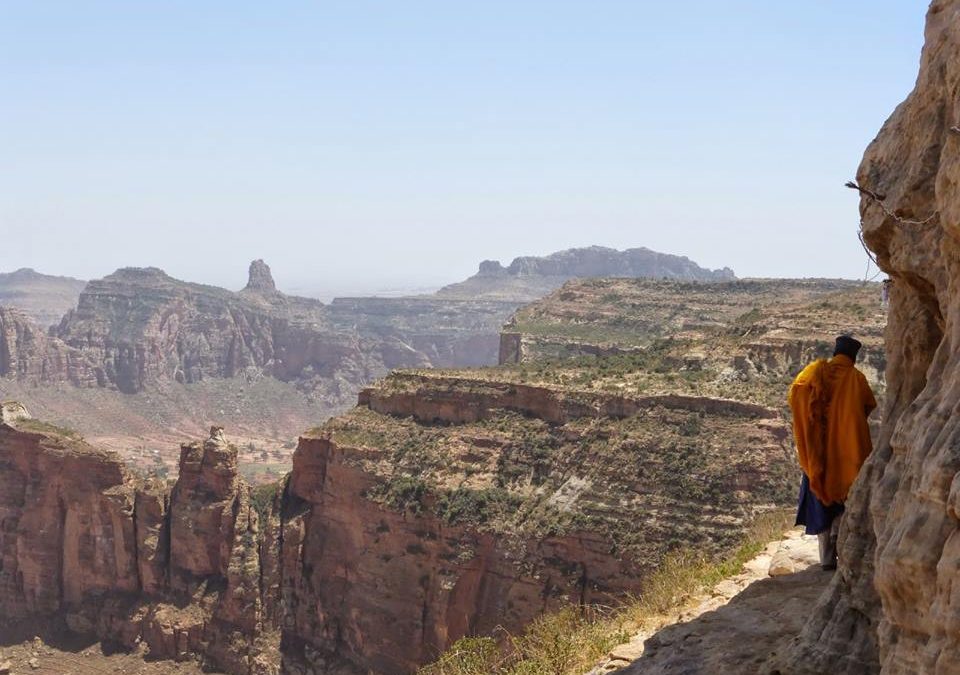 On this day is commemorated Saint Gregory, Archbishop of the country of Armenia, who became a martyr without the shedding of his blood.  This man established himself in the country of Armenia in the days of Dertades the king.  Now that king was an infidel, and when he came into his temple to offer up incense to the gods, he summoned Gregory to offer up incense to his gods likewise; but Gregory would not obey the king’s command, and he tortured him with exceedingly severe tortures, and had him burned with fire.  After this he cast him into a pit naked, and he lived therein for fifteen years.  And there was a certain old woman a widow, near the king’s palace, and she saw a vision wherein one said unto her, “Make bread regularly, and cast it into the pit wherein the holy man is.”  And the old woman continued to act in this wise, and she cast bread into the pit until the fifteen years were ended.  In those days that king killed the virgins, namely Saint ‘Arsima, and the virgins who were with her, and their bodies were thrown out upon the mountain.  And Satan made himself master of King Dertades, and the Lord changed his appearance, and he became like unto a wild boar, and Satan also made himself master of very many of the royal officers, and there was very great sorrow in the royal house.  And the king’s sister saw a vision one night wherein it seemed that a man said unto her, “Unless ye bring up Gregory out of the pit thou wilt never be able to cure him (i.e. the king).”  And straightway they went into the pit and brought Saint Gregory out there from, and he healed the king forthwith and all those who were in his house.  And he made the bodies of the virgins ready for burial, and laid them in a beautiful tomb.  Now the whole history of him is written in the section for the fifteenth day of Tahsas, which is the day whereon he died.

And on this day also is celebrated the festival of the Holy and Honorable Cross, for when it was found the people made a festival for three days with joy and gladness.  Similarly it is meet that we ourselves should celebrate a festival of commemoration in its honor with great joy, for in it there is the joy of our salvation from our enemy Satan, and praise to our Lord Jesus Christ.

Salutation to the Tree of Life, the bed of the Son of Mary!

Salutation to the Tree of Life, which was sprinkled with the Divine Blood!

And on this day also died Kirkos (Cyriacus), the dweller in the desert.  This holy man lived in the days of Abba Benyamin, and he fled from the Emperor Marcianus, the evil one, and established himself as an anchorite on the top of a high mountain.  He lived in a cave wherein wild animals lived, and he begged his food from God.  And God commanded a she-buffalo to go to him every third day, and he drank milk from her, and he lived in this manner for ten years.  And Satan, the accursed one, having become jealous of his strenuous ascetic labors, began to tempt him in all the ways and means, which he hath.  At one time he would come to him in the form of a black man to terrify him, an at another he would come to him in the form of a company of soldiers, who threatened him with dire threats.  And horsemen seized him, and bound him with fetters, and beat him with whips, and dragged him along the road by his feet.  When he knew that these men were Satans he made the sign of the Cross over himself, and they disappeared from before him.  Once when he was kneeling down at night praying, a thing, which was like unto a huge serpent, coiled itself about his neck and wished to shoot venom into his face, and again he entreated the help of God Who sent His angel and delivered him.  When the time for his death drew nigh, he went to the father Archbishop Abba Benyamin, and told him everything, and he sent to him three archbishops to undertake the preparation of his body for burial.  When they had gone into his cave they found him very ill, and at the moment when his spirit went forth from his body they saw great and indescribable splendor; and then they buried him in his abode.