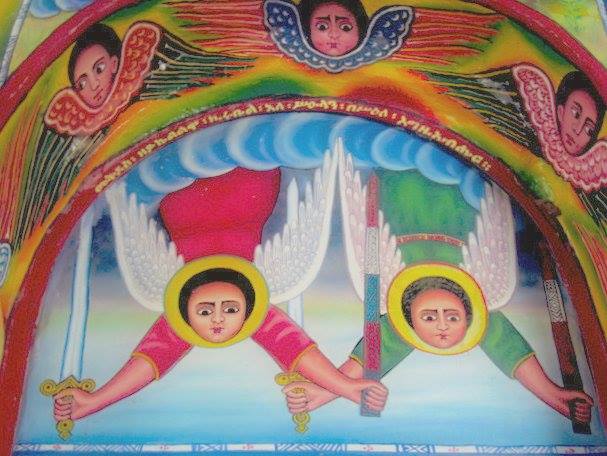 On this day the holy honourable Cyprianus and the virgin Justina became martyrs.  This holy man Cyprianus was at one time a magician, and an infidel, and a teacher of sorcery in a city of the West, and in knowledge of magic he excelled every other man in the city of the West.  And because of his excessive impudence, and his arrogance, and his infidelity, and his sorcery, he rose up and went to the city of Antioch in order that he might find out whether there existed among the people of that city any other kind of magic; if there was, and if it was superior to his own knowledge, he intended to learn it, and if there was not he intended to triumph over them through his knowledge of sorcery. When he arrived in the city of Antioch the report of him was heard therein, and a certain young man, the son of one of the elders of the city of Antioch, heard of him.  Now the young man lusted for a certain Christian virgin who was called Justina, whom he had seen going to church; and his heart was hot like the fire which blazeth because of his longing and his love for her.  And he was unable to obtain her either by the gift of money, or by the threat of death, or by the operation of sorcery.  When the young man heard of the arrival of Saint Cyprianus in the city of Antioch, and knew that he was reported to be superior to every man in Antioch through his sorcery, straightway he went to him, and told him about the sorrow in his heart, caused by the virgin Justina, and how he longed for her, and how he loved her exceedingly, but could not obtain possession of her.  And Saint Cyprianus promised him, saying, “Fear thou not, I will fulfill for thee all thy desire.”  And he directed against her all the works of his sorcery, but failed to obtain possession of her.  Every time when he sent against her any of the powers of Satan, he found her praying, and they were unable to stand before her, and they were powerless to fight against her.  When Cyprianus was tired and was unable to gain the mastery over her, he called the Satans, and said unto them, “If ye are not able to bring Justina the virgin to me, I shall turn and become a Christian.”  And the chief of the Satans meditated and thought out one device whereby he might seduce her, and that was by making one of his Satans to disguise himself and to take the form of Justina, and then to make him to appear to Cyprianus as if he were showing him Justina.  And that Satan did as Satan his master commanded him, and he hastened and made him known to Cyprianus.  And he said unto him, “Behold Justina is coming to thee”; and Cyprianus rejoiced exceedingly, and he imagined that it was true, and he sat down and waited.  And behold, Satan disguised as Justina came unto him, and Cyprianus rejoiced, and rose up straightway to embrace her by reason of his great joy in her, and he said unto her, “Good is thy coming, O Justina, queen of women.”  And as soon as he had uttered her name only, that Satan who had disguised himself as Justina melted away and disappeared like smoke, and there was a fetid smell [there].  And Cyprianus knew that this thing was a debased and deceitful trick of Satan; and if Satan did not dare to stand before her face, and could not endure the mention of her name, how could he have the power to seduce her?  And Cyprianus rose up straightway and burnt and destroyed his books of magic, and was baptized with Christian baptism by the Archbishop of Antioch.  Then he became a monk, and after a few days he was made a deacon, and a little later a priest.  And when he had grown old in doing good works and in the doctrine of the Church, he became fit to be bishop of the city of Cartagena in the country of the West.  And he took Saint Justina and made her the abbess of a house of virgins.  When a General Council of the saints assembled in the city of … this holy man was one of those who were assembled there.  And after many days Decius the infidel emperor heard of Cyprinaus and Justina, and he had them brought before him, and he demanded from them a denial of Christ, and he endeavored to make them worship idols.  When they would not obey his command, he tortured them with very great severity.  After this he ordered his soldiers to cut off their heads with the sword, and they cut off their heads and Cyprianus and Justina received incorruptible crowns of martyrdom in the kingdom of heaven.

And on this day it is meet for us to celebrate a festival of commemoration of our Lady, the holy Virgin Mary.  [A note in the Bodleian MS. says that this festival must be kept on the 21st of every month of the year.]

And on this day also there took place the death of Saint Tiberius the apostle, one of the Seventy-two disciples.