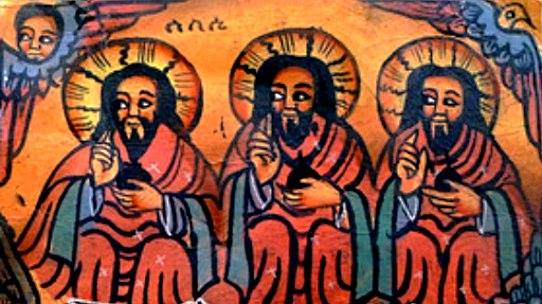 On this day the Saints Kotolos (Cotylus) and his brother ‘Aksu became martyrs.  These holy men were the sons of Sapor, King of Persia, and they had a companion whose name was Tatos.  Now Sapor, King of Persia, worshipped fire and the sun, and he afflicted and tortured many believing men, and no man throughout his country dared to mention the Name of Christ.  And his son Kotolos (Cotylus) had a friend whose name was Tatos, and he was governor of the country of the Maydaswiyan; and certain people laid information against him before Sapor the king, and told him that he was a Christian.  And the king sent to him a certain noble whose name was Tumager to find out whether that which was said about Tatos was true or not, and he commanded that noble, if he found that Tatos was a Christian, to inflict heavy punishment upon him.  When Kotolos (Cotylus), the son of the King of Persia, heard these words, he rose up and went to that country where his friend Tatos was.  When the noble arrived in that country and found that Tatos was a Christian, even as the king had been informed, straightway he ordered his men to make an oven red-hot and to roast him to death in it.  And Saint Tatos made the sign of the Cross over his face against the fire, and the fire died down and was extinguished.  When Kotolos (Cotylus), the son of the king, saw this miracle, he marveled exceedingly, and he said to Tatos his friend, “How didst thou learn this magic, O my brother?”  And Tatos answered and said unto him, “This is not magic, O my brother, but it is through faith in our Lord Jesus Christ that signs and wonders like this are performed.”  And Kotolos (Cotylus) believed on our Lord Jesus Christ.  And they lighted a fire and made it to burn until the flames thereof reached a great height, and Kotolos (Cotylus) drew nigh unto the fire, and he made the sign of the Cross over it, and the fire turned backwards a distance of twelve cubits.  And the noble wrote his dispatch and sent it to Sapor the king, and in it he informed him what had happened to Tatos and to Kotolos (Cotylus), the son of the King of Persia.  And the king sent messengers and had them brought to him, and his men cut off the head of Tatos with the sword, and he received the crown of martyrdom in the kingdom of heaven.  His son Kotolos (Cotylus) he tortured with great severity, and he delivered him over to another noble who was to torture him, and when this noble had tortured him cruelly he shut him up in prison.  And ‘Aksu, his sister came unto him in the prison house, for the king had sent her a message that she must persuade him to return to his former relations with him.  And Saint Kotolos (Cotylus) admonished his sister, and he taught her the Right Faith, and straightway she turned from her error, and believed on our Lord Jesus Christ.  Then Kotolos (Cotylus) sent his sister to a certain priest and he baptized her secretly with Christian baptism, and she returned to her father the king and said unto him, “It would be a good thing for thee if there happened to thee what hath happened to me and to my brother Kotolos (Cotylus).  For there is no God but Jesus Christ, the Son of the Living God, Who hath made the heavens, and the earth, and the sea, and all that is therein.”  And when the king her father heard these words from her he was exceedingly wroth with her, and he commanded his men to torture her very severely, and they did so until she yielded up her soul unto the hand of the Lord, and she received the crown of martyrdom in the kingdom of heaven.  And he tied her brother Saint Kotolos (Cotylus) to the tails of horses and he made him to run behind them over the mountains until he yielded up his soul into the hand of His Creator.  Then he had his body cut into three parts, and his men cast them out on the tops of the hills so that the birds of heaven might consume them.  Thus Saint Kotolos (Cotylus) finished his strife, and received the crown of martyrdom in the kingdom of heaven.  When the king’s soldiers had departed the Lord commanded the priests and the holy deacons to take the bodies of the martyrs, and they went by night and took the bodies of the martyrs, and they went by night and took the bodies of the saints, and they found that they had become as white as snow.  And they prepared them for burial with honour, and they laid them in a beautiful tomb until the end of the days of persecution.  After the days of the persecution they built a beautiful church for them, and laid the bodies of the saints therein, and through them very many signs and wonders were wrought.

And on this day is commemorated Balan.