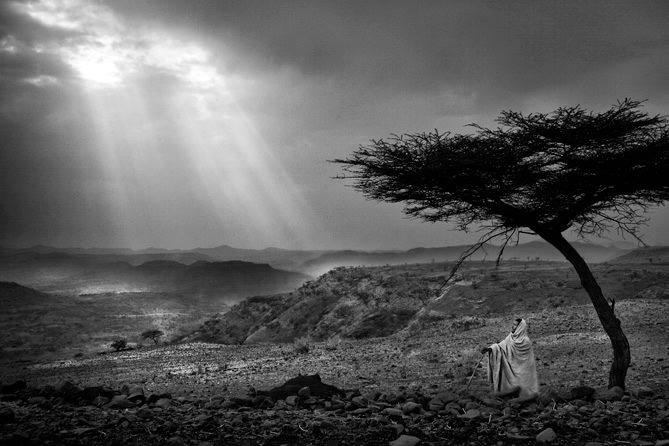 On this day Eustathius and his two sons and his wife became martyrs.  This man was one of the chief generals of the Imperial Army of Rome, and he knew not God.  His own original name was Kudos, and he gave alms in abundance, and expended much charity on the poor and needy, and God did not wish that his toil should be in vain.  And Eustathius was in the desert hunting wild animals, and one day there appeared unto him the figure of a cross between the horns of a stag, and the cross-reached up to the clouds.  And Eustathius chased the stag into the mountains, and he pursued it that he might kill it.  And the Lord spoke unto him from between the horns of the stag, and told him His Name, and He commanded him to go with his sons and his wife to the bishop of that city, and be baptized with Christian baptism.  And our Lord Jesus Christ informed him that poverty should come upon him speedily.  When Eustathius heard these words, he went down from the mountain, and departed to the bishop, and he and his wife and his sons were baptized with Christian baptism; and he abandoned his former name and called himself “Eustathius.”  And straightway all his property disappeared, and his slaves, and his handmaidens, and his horses; and he took his wife and his sons, and he went forth from the city of Rome and embarked in a ship.  Now he took with him neither any money to pay for their passage, nor anything else which he could give the captain [in its stead].  When they arrived in port the captain took his wife instead of passage money, and Eustathius took his two sons and departed.  And he came to another stream which he had to cross, and he took up one of his sons on his back to take him over the river, and he passed over; and he returned to his other son to carry him across the river, but he found him not, because a wolf had seized him.  Now a lion had seized and carried off his other son.  And Eustathius sorrowed with a very great sorrow because of the loss of his wife and his sons, but God, great in counsel, in Whom there is power, protected both of them unharmed.  And Eustathius went on to a certain city, and he became a guard of the village and remained one for many days.  After those days the Emperor of Rome died, and there reigned in his stead another emperor who enquired for Eustathius and found him not.  And he sent messengers out into all the district to seek for him, and one of those messengers who had been sent out by the emperor to seek for Eustathius came to the village wherein he dwelt.  And the two men recognized each other, and they embraced, and the messenger carried Eustathius to the emperor in great honour.  When Eustathius arrived the emperor honored him exceedingly, and appointed him to the position in which he was formerly.  And the emperor commanded that two men should be recruited from every city for use in war.  Now the two sons of Eustathius were brought up in the same city, neither knowing the other.  One day, when the two sons of Eustathius, who had been placed in that city, were talking together, they discovered that they were brothers; and then [the messengers] took them to the city of Rome and God was please to set them in the house of business of their father who did not know them.  As concerning their mother whom the pagan captain of the ship seized, God protected her and delivered her uninjured from his hand; now she was a keeper of the gardens of the city of Rome.  And the two young men came to the village where their mother was, and whilst they were holding converse together, the younger brother spoke, and their mother recognized that they were her sons, and she embraced them, and rejoiced in them, and they rejoiced in her exceedingly.  And the three of them met together and they went to Eustathius and informed him what had happened to them, and he knew that the woman was his wife, and that the young men were his sons, and they embraced each other and rejoiced together greatly.  Thus they were all gathered together [again] in one place, even as God had promised them.  And they dwelt together, and whilst marveling they praised God, blessed be His Name, because He had done good things for them.  After this the emperor who loved Eustathius died, and there reigned another emperor who worshipped idols; and he summoned Eustathius and his wife and his sons, and had them brought unto him.  And he said unto them, “Cast incense to my gods.”  And the holy men said, “We will not worship idols, and we will not bow down to them, for we bow down to our Lord Jesus Christ, the Son of the Living God.”  And straightway the emperor was wroth with them, and he commanded his soldiers to torture them, and they tortured them very severely, but God raised them up whole and unharmed.  Then he commanded his soldiers to cast them into a brazen cauldron, and [when] they had done so he commanded to light a fire on top of them, and thus they delivered their souls into the hand of God, and they received crowns of martyrdom from our Lord Jesus Christ.

And on this day also died the holy woman Tekla (Thecla) who was a martyr without the shedding of blood.  This holy woman had parents, who were rich and honorable Macedonians, and they brought her up strictly according to the custom of their country; now they worshipped idols.  When Paul arrived in the country of Macedonia, he began to preach in the Name of our Lord Jesus Christ, saying, “Blessed are those who are poor for righteousness’ sake, for theirs is the kingdom of heaven.  Blessed are those who have a wife and who are as if they had not one, for they shall inherit everlasting life”–these and such like words.  When Saint Thecla heard these words, she remained in the upper floor of her house and only came down for food and drink.  And her mother said unto her, “Why dost thou not come down form the upper floor of thy house, and why dost thou not eat?”  And she came down from the upper floor of her house, and went to Paul secretly, and she bribed the doorkeeper of her house with her hair-comb of gold not to talk about her [leaving the house].  When Paul saw her he received her gladly and taught her the Faith of Christ.  On the following day when her mother came to Paul she found Thecla sitting with him, and she went to the governor and reported to him that her daughter was a Christian.  And the governor commanded his soldiers to bring Thecla with Paul, and when they had brought her he was wroth with Paul and ordered them to cast him into the fire; [and they did so] but God delivered him.  And the governor commanded them to cast Thecla into the fire, and all the children of the city assembled to look upon her torture.  And without the use of force on the part of the soldiers she threw herself into the flames after having made over herself the sign of the Cross; and she went forth from the midst of the fire, which had not touched her.  And she went to Paul, and shaved off her hair, and girded herself with a belt and followed Paul.  When another governor heard this he seized her and pressed her to abandon the Christian Faith, and when she refused he cast her into a den of lions and bears, and these animals bowed down before her and licked the dust off her feet.  When the governor and those who were with him saw that life was hers, they believed and were baptized in the Name of the Father and the Son and the Holy Spirit.  And Thecla continued to follow Paul, and to preach in the Name of our Lord Jesus Christ; and having worked many miracles she died in peace.

On this day also died Saint Antilarius.  This holy man was an officer of the tax-gatherers, and he had no mercy on anyone.  One day certain poor folk were sitting in the sun, and they began to mention the names of the charitable and the avaricious, and they mentioned the name of Antilarius as that of a man who had never bestowed any alms on any one of them.  And one of the poor said, “What will ye give me if I succeed in drawing a gift from him?”  And they promised to give him something.  And the needy man went to Antilarius and begged for alms from him, and Antilarius wanted to throw a stone at him in great wrath, but as he had no stone he threw at him the piece of bread-crust, which was left, in his hand.  And taking this the beggar went to his companions, and told them that he had received alms from Antilarius.  And Antilarius had a dream, and in it he saw himself at the Judgment, and certain black men were disputing concerning him, and there were other men there who were white; now their faces were austere, and they said, “We cannot find attributed to him any alms except the piece of bread-crust”; and when the speaker cast the bread into the scales it balanced exactly all his sins.  When he awoke from his sleep he distributed all his possessions among the poor and he departed to Jerusalem where he sold himself for three dinars, and [he gave away] in alms the price of his sale, and he lived and served like a slave.  And when the slaves of his lord caused him sorrow, a shining man appeared unto him, and said unto him, “Sorrow not, for I have received the price of thy sale, and behold it is here in my hand.”  When certain men who had come from his city revealed what he had done, he fled secretly and came to the gates of the city, the keeper of which was deaf and dumb.  When Antilarius said unto him, “Open the gates to me,” there went forth from his mouth something which was like unto fire, and the ears of the gate-keeper were opened, and he spoke with his mouth, and he opened the gates to Antilarius who went forth into the desert and died there.  When the people missed him, the gatekeeper told them all that had happened, and they marveled at his holiness and at his admirable behavior.

And on this day also died Abba John of Debra Tsege.  This holy man by means of excessive fasting, and prayers, and vigil made his body emaciated, and he became like a dried clod of earth.  One day when certain men poured over him a cupful of water, because of the excessive dryness of his skin he left only unabsorbed a very small portion of it.