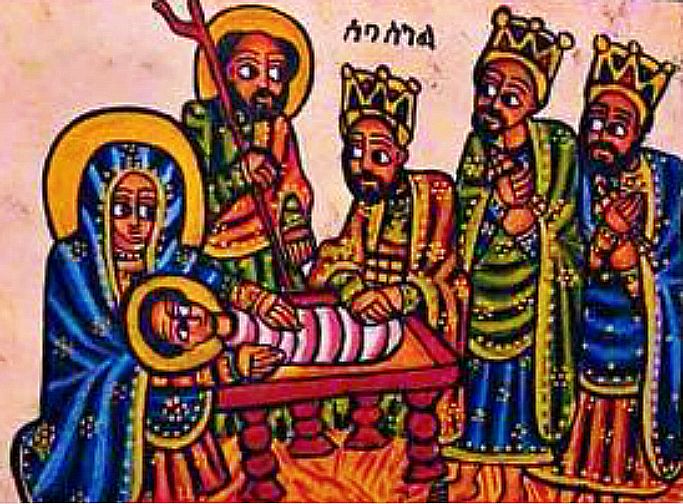 On this day is commemorated the festival of the birth of our Lord Redeemer Jesus Christ by Mary, the Holy Virgin.

Salutation to the birth of the Flower, Jesus Christ.

And on this day also took place the translation of the body of Saint John the evangelist and apostle, the proclaimer of the Deity.

Salutation to the translation of the body of Saint John the evangelist.

And on this day also became martyrs the holy virgin ‘Arsima, and Agatha, and the two virgins who followed them, and many men; and the number of them all was two and seventy souls.  Now when Diocletian the infidel was reigning he sought out a maiden of beautiful appearance to marry her.  And he commanded certain painters to depart into every country, and to choose for him a maiden of beautiful form and appearance, and they were to paint a picture of her on a tablet for him, and show him all her limb and her movements.  When those painters arrived in the city of Rome they discovered a certain nunnery, and they found therein this virgin ‘Arsima; and there was in the nunnery none like unto her in her appearance, and there was none who resembled her.  And the painters painted a portrait of her and sent it to the Emperor Diocletian.  When the emperor saw her portrait he rejoiced exceedingly.  And he sent to the kings and governors and bade them come to him for the marriage.  When the virgins knew this thing, they wept, and they rose up and went forth from that nunnery entreating God to help them, and to keep them in their virginity; and they came to the country of Armenia, and entered the royal city of Dertades the king.  And they dwelt in a certain village camp of nomads in a plain, and their number was five and seventy men and women, besides the nine and thirty virgins.  And they dwelt in great tribulation, and they could not find food, and one of them made a . . . and used to feed them by means of the work thereof.  When Diocletian sought after ‘Arsima he found her not. And he heard that she was in the country of Armenia, “Take care of her and send her to me.”  When the virgins heard these words they hid themselves in another city, but certain men went and gave information to the king about them, and Dertades commanded his soldiers to bring the virgin ‘Arsima to him with great honor; and when she did not wish to go to him, they dragged her and forced her to come to him.  When Dertades saw the beauty of the holy woman he wanted to defile her virginity, but he was not able to do so.  And he brought her mother Agatha to her to persuade her to be submissive to the king’s command.  And when her mother came to her she besought her to endure patiently, and she comforted her, and she exhorted her, and told her and taught her that she must not forsake her true Bridegroom, Who is the Lord Jesus Christ, the Son of the Living God, and that she must not defile her virginity with a filthy pagan and a stranger.  When Dertades heard that she had persuaded her daughter to endure patiently, he commanded his soldiers to break the teeth of Agatha her mother.  And God gave to the holy woman ‘Arsima power and strength over Dertades, the king, and she hurled him backwards, and dragged him along.  Now Dertades was well known in battle, for he was exceedingly strong, and the king was put to shame having been vanquished by the virgin ‘Arsima; and he commanded his soldiers to cut off the head of Saint ‘Arsima.  And the soldiers came and dragged her away with ropes, and they cut off her head, and tore out her tongue, and put out her eyes, and they cut off her limbs and hacked her body to pieces.  When the king awoke from his fall, and his senses returned to him, he repented the killing of Saint ‘Arsima; and when he knew that she was dead he commanded his soldiers to slay all the [other] virgins.  And the soldiers came and bored holes in the soles of their feet, and they flayed them, and cast them out [to the beasts].  Now there was one of them who was sick and was lying on her bed, and she cried out to the soldiers and they came to her, and cut off her head with one blow.  Thus they all received crowns of martyrdom in the kingdom of the heavens.  And they slew all the men who had come with them from the city of Rome, and the number thereof was two and seventy souls; and their bodies were cast out into the desert.  After the death of these martyrs a certain devil took possession of the king, and he continued to punish him until Saint Gregory came to him, and prayed over him, and he was healed of his pain immediately, and he believed in Christ.  And they took the bodies of the holy martyrs, and laid them in a holy place until the days of the persecution were ended; and a beautiful church was [then] built for them, and signs and great wonders took place through them.

Salutation to John the Baptist.