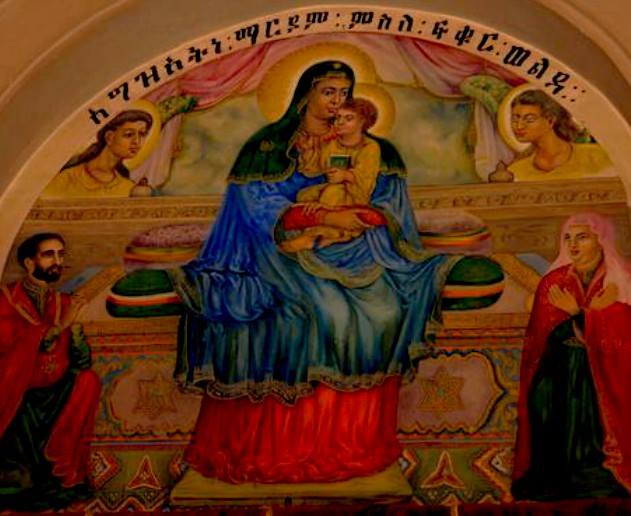 On this day was revealed the miracle of our Lady Mary in the city of Sedenya when oil dropped from the tablet with her portrait [painted] upon it as if it had been clothed with flesh.  Now, it is said that Luke the evangelist painted this portrait.  And the cause of its coming to Sedenya was a certain widow whose name was Martha, and who turned her house into a habitation for pilgrims; and she loved our Lady Mary exceedingly, and ministered unto her with all her power.  One day there lodged with her a certain righteous monk whose name was Theodore, and she received him with joy.  And on the following day when she was bidding him farewell, she said unto him, “Whither goest thou, O father?”  And he said unto her, “I go to worship in the Sanctuary in Jerusalem.”  And she said unto him, “Take a little money from me to buy me a picture of our Lady Mary, and bring it to me when thou returnest to me”; and he said unto her, “I will buy [a picture] with my own money, and bring it to thee.”  And when he had arrived in Jerusalem he knelt and prayed in the holy places, and he set out on his return journey without having bought the picture.  And immediately he heard a voice, which said unto him, “Why hast thou forgotten to buy the picture?”  And being troubled by the voice he turned back into the marketplace, and found a picture of our Lady Mary, which had sweet features and a beautiful form.  Having bought it he wrapped it up in cotton and in fine linen.  And as he was traveling along a terrible road in the desert thieves rose up against him, and when he was wishing to take to flight, a voice came forth from that picture which said, “Fear not:  complete thy journey”; and he went on his way and none challenged him.  Another time a savage lion rose up against him and wanted to rend him, and straightway an awful voice came forth from that picture and drove away the lion.  And when Theodore saw all these signs and wonders, he wanted to carry that picture and drove away the lion.  And when Theodore saw all these signs and wonders, he wanted to carry that picture to his own city, and he did not wish to give it to the widow.  And as he was traveling by boat on another journey, the wind rose up against him and carried him towards Damascus.  And having disembarked he went into the house of that widow with several other pilgrims, and he did not discover himself to her, and she did not know him.  And on the following day when he wished to go forth secretly and to depart to his city, the gates of the house failed to work and they remained jammed throughout the day; in the evening the monk returned to his abode, and when the widow saw him she wondered.  And he continued to do this for three days, returning each evening; he saw the gate, but when he wished to go through it, he was unable to go on his way.  Then the widow took him and said unto him, “O my father, what aileth thee?  Is thine heart troubled that I see thee thus disturbed?”  And then he told her everything that had come upon him in the matter of the picture.  And straightway she brought him into her house, and she opened the wrappings of the picture and found that drops of sweat were falling from it; and by reason of her joy she kissed the hands and feet of the monk.  Then she took the picture into her prayer-chamber, and laid it upon a stand in a recess with great honors.  And she made for it a brass grating, so that no one could touch it, and she hung before it lamps which burned by day and by night, and outside these she hung silken curtains.  Beneath the picture she set a marble bowl into which the drops of oil, which sweated out from it, might be collected.  And that monk dwelt with the widow, and ministered to the picture of our Lady Mary until they both died.  And when the archbishop of that city heard the report of the picture, he, and the bishops and the priests and all the people came [to the house], and when they looked at the tablet with the picture they found that it was in the condition of being covered with flesh; and they marveled at this divine work.  And having emptied out the oil from the bowl, and divided it among themselves as a blessed thing, the bowl filled up [again] immediately.  When they attempted to remove the picture to another spot a great earthquake took place, and many people died; and the picture remaineth there until this day.

And on this day died Judith the prophetess, who delivered Israel from the hand of Holophernes, the evil one, through the wisdom and counsel which she employed until at length she cut off his head by the might of God which was upon her.

And on this day also the Matronya became a martyr.  This holy woman was handmaiden to a Jewish woman,  and she was a Christian even as her parents were Christians.  And that Jewish woman her mistress hated [Christianity], and she wished to make her maid abandon the Christian Religion, and to bring her over to the Jewish Faith, which she would not embrace.  For this reason she reviled Matronya and made her service heavy upon her.  One day Matronya followed her mistress the Jewish lady until she brought her to the Jewish synagogue, and Matronya turned aside and went into the holy church.  And when her mistress asked her, saying, “Why didst thou not come into my synagogue?”  The holy Matronya answered and said unto her, “God is very remote from thy synagogue, and how would it be seemly for me to enter therein?  But the place which is seemly for me to enter is the holy church, which our Lord Jesus Christ purchased with his precious blood.”  When he mistress heard these words she was wroth with her and beat her severely, and shut her up in a dark place wherein she remained for four days without food and drink; then the Jewess had her brought out from her prison and beat her cruelly with many, many stripes, and once again she sent her back into the prison, where she died.  And after her death her mistress took her body, and carried it up to the roof of her house, and according to what the men say who saw her, she cast it out, and it fell down by itself.  Now the mistress of Matronya was afraid of the Government, and alarmed lest they should examine her about her murder.  And the wrath of God fell upon that Jewish woman, and as she was coming down from the roof of her house, she fell down headlong, and died, and departed into fire forever.  And this holy woman Matronya went to joy everlasting.

And on this day also are commemorated Saint Athanasia and her three children.