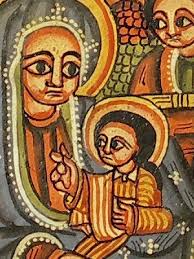 And on this day died Saint Christopher, the martyr, whose face was like the face of a dog. This holy man came from the country, the people whereof used to eat men and dogs.They captured him in battle, and his father became a believer through Saint Matthew the apostle. When they captured him he did not believe the words of the men who made him captive, and he prayed to God, and He opened his tongue, and he spoke as spoke those who had made him captive. And he rebuked those who afflicted the Christian peoples, and the captain who was over the soldiers beat him very severely. And the holy man said unto him, “If it were not the command of God, my Lord Jesus Christ, which maketh me to endure and which holdeth back my strength, and restraineth me, thou and thy soldiers could not be delivered from me.” And the governor sent a message to the emperor concerning him, and told him what had happened to him, and the emperor sent two hundred soldiers to bring the holy man to him; and he went with them of his own free will without fear. And he had a staff in his hand, and he prayed and straightway it sprouted and blossomed. When the soldiers lacked bread the holy man prayed, and there was bread in abundance for the soldiers, who marveled exceedingly, and believed on our Lord Jesus Christ. And when they arrived in the city of Antioch they were baptized with Christian baptism by the hand of Abba Paul, Archbishop of the city of Antioch. When Christopher came before the Emperor Decius he frightened him, and Decius tried to persuade him [to deny Christ]. And he sent two very beautiful harlots to him for he thought they would be able to make him to fall into sin with them; but the holy man rebuked them, and they believed on our Lord Jesus Christ, and they repented and became martyrs. And the two hundred soldiers likewise confessed our Lord Jesus Christ, the Living [God], before the emperor. Then the emperor commanded the [other] soldiers to cut off their heads, and they cut off their heads with swords, and the soldiers received crowns of martyrdom in the kingdom of the heavens. And the holy man terrified the emperor, and he said unto him, “O thou receiver of the work of Satan and his abode!” And the emperor waxed furious, and he commanded his soldiers to cast him into a huge frying-pan and to light a fire under him, and they did so, but no harm whatsoever came to him as they wished, on the contrary he taught the people whilst he was in the frying-pan. When the people saw that he was speaking and teaching the men, and that he was whole and unharmed, they marveled exceedingly, and they believed on our Lord Jesus Christ; and they drew nigh to the fryingpan in order to lift the holy man out from it. And the emperor commanded his soldiers to cut off [the heads] of all of them with swords, and they did so, and [the people] received crowns of martyrdom. Then the emperor commanded his soldiers to hang a great stone from the neck of Saint Christopher, and to cast him into a pit, and they did unto him even as the emperor commanded; and the angel of the Lord brought him out of the pit, whole and unharmed. When the emperor was tired [of torturing him] he commanded them to cut off his head with the sword, and he received the crown of martyrdom in the kingdom of heaven. Salutation to Christopher who believed through the teaching of Matthew, and salutation to those who died with him, thirty women and handmaidens, and three men.

And on this day also is commemorated Malal’el (Mahalaleel), the son of Cainan. Malalel (Mahalaleel) lived one hundred and sixty-five years and begot Jared; and all his days were 165 (sic) years. And Malal’el (Mahalaleel) died on the First Day of the week, on the second day of the month of Miyazia, and he was buried in the Cave of Treasures.
Glory be to God Who is glorified in His Saints. Amen.