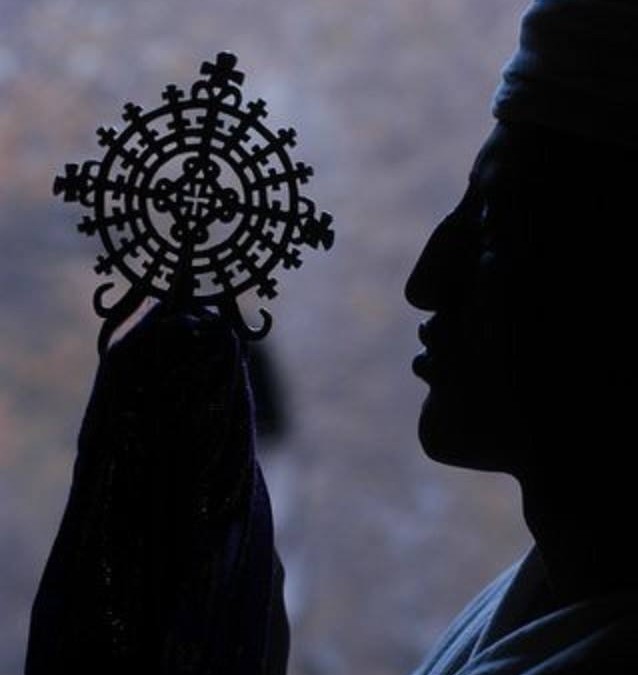 On this day died the great prophet, the righteous man, Ezekiel, the son of Buz, the priest, who was made captive, and carried off to the city of Babylon. When Nebuchadnezzar carried the children of Israel into captivity, the spirit of prophecy descended upon Ezekiel when he was in the land of Babylon, and in prophecy he spoke many marvelous words. In prophecy he spoke concerning the birth of our Lord Jesus Christ by our Lady, the holy Virgin Mary, and how after she had borne Him, she would remain a virgin. And he prophesied, saying, “I saw in the East a door which was shut. And God said unto me, this door shall remain shut, and it shall not be opened, and none shall go through it except the Lord God of Israel, and He shall go in and out from it.” And he prophesied concerning the baptism of Christ, [saying], “The soul of a man shall be sanctified, and his body, and the heart of stone shall be plucked out from him, and he shall become a Son of God by the descent of the Holy Spirit upon him” (Ezekiel xxxvi, 26). And he encouraged the people and rebuked the priests for forsaking the teaching of the people, and he said unto them, “Guard yourselves against laziness, and be not blind to doctrine.” And he rebuked them and said unto them, “God will require the souls of men from you if ye do not teach them and if ye do not wake them up.” And he prophesied concerning the resurrection of bodies, [saying], “Needs must that dead bodies shall rise, and they shall become one with their souls even as they were aforetime. And they shall rise up according to what is prepared for them, whether it be for punishment or whether it be for joy.” And he uttered many prophecies, which are of benefit to those who read them, and God made manifest through him many signs and wonders. When the children of Israel worshipped idols in the city of Babylon, he rebuked them, and because of this their leaders rose up and killed him. And he prophesied five hundred and seventy and seven years before the Incarnation of our Lord Jesus Christ, and the days of his prophesying were one year. Salutation to Ezekiel, who saw Mary as a closed door, which God had established.

And on this day also took place the strife of ‘Aflamis, and Theodora, and Arsenius, the monk, and Basilides.
Glory be to God Who is glorified in His Saints. Amen.