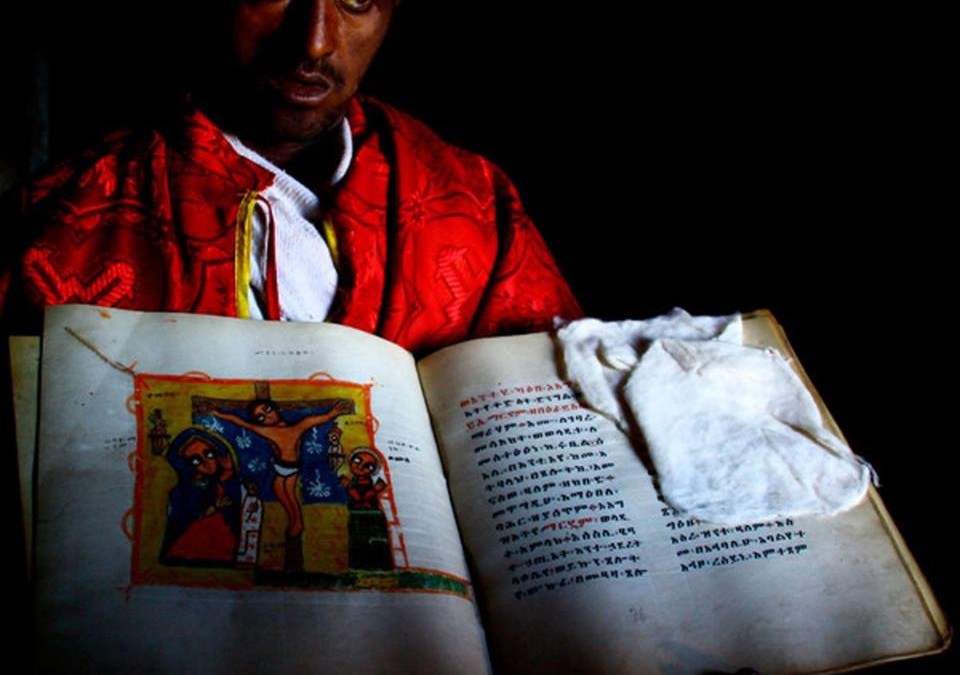 On this day died the holy father, the ascetic and fighter, the priest Abba Zozimas the monk. This holy man was a native of the country of Palestine, and his parents were Christians and righteous folk. And having begotten this holy man they themselves brought him up for five years, and then they gave him to a certain righteous elder monk to educate and to train thoroughly as a Christian, and to teach him philosophy, and the doctrine of the Church; and the elder received him and treated him like a son in Christ. And he taught him philosophy of every kind, and doctrine, and after this he arrayed him in the garb of the monk, and made him a deacon. And he grew up doing good works, and he increased in excellence, and he was continually praising God, and he read the Scriptures by day and by night. And whether he was working with his hands, or whether he was eating his food, he never ceased from praising God at all times. When he had completed five and forty years in that monastery, he was made a priest, and he increased his ascetic labors and his contending, and he became the conqueror in every spiritual fight. And the Enemy and Adversary sowed in his heart the evil thought that he was superior by far in respect of severity of his labors to all the other ascetics his contemporaries. And he said within his soul, “Doth there remain for me to do one work of righteousness and asceticism which I have not done?” And our Lord Jesus Christ did not abandon him, but He sent an angel to him, and commanded him to go to that monastery which was near the River Jordan. And he rose up and departed, and he came to that monastery, and he found therein righteous elders who were perfect in their contending, and he knew that his ascetic labors were less strenuous than theirs, and that there lived in the world men who were more perfect and better than he. And he took up his abode with them in that monastery, and he fought as they fought with them for many years. And the monks of that monastery were accustomed, when the Great Fast of forty days came, to fast in the monastery for the first week of the Holy Fast, and to receive the Holy Mysteries on the First Day of the week. And on the following day they went out from the monastery singing the 27th Psalm, “The Lord is my light and my salvation, whom shall I fear?” to the end. When they had finished their coming forth from the monastery, they prayed at the gates of the monastery, and embraced each other, and the abbot of the monastery blessed them, and then they dispersed themselves in the desert, and each of them carried out his spiritual fight by himself, unseen by his companions. And if one of them saw that a companion was near him, he fled to another spot, so that he might not see the face of his neighbor. And Saint Zozimas used to go out with them each year, and he would wander up and down in the desert, and ask God to reveal to him something, which would give him comfort. As he was wandering about he found Mary, the Egyptian woman was dwelt in the desert, and he learned from her the manner of the life which she had lived in the world in the days of her youth, and how it came to pass that she entered that desert; and she told him everything which had happened to her, and all her fight from the beginning to the end thereof. Then she asked him to visit her. After one year [he came to her] and gave her the Mysteries. After this, in the second year, he visited the desert, and found that she was dead; and he buried her, and he told the monks of that monastery concerning her strife. This holy man found it meet to go to the “Country of the Blessed,” and it is he who wrote the account of the dwellers there, and their strivings, and revealed their works, and their righteousness. When he had completed eight and ninety years, he died in peace. Of these he lived [five and] forty years in the world before he entered the monastery, and for three and fifty years he lived the life of an ascetic, and fought the spiritual fight. Salutation to Zozimas who visited the Country of the Blessed like Matthew, and described the lives of those who lived there.

And on this day also the righteous men of the company of Isidore, and a child ten months old, together with his father and mother, became martyrs.

And on this day also there was made manifest a great miracle through our holy father Abba Sinuthius (Shenuti), Archbishop of the city of Alexandria. This man had gone up into the desert of Scete in order to fast the Great Fast in the monastery of Saint Abba Macarius with the monks. And when it was [the time for] the Eight Hosannas, the Arabs and Muslims assembled, and came to the desert of Scete to plunder the desert houses and monasteries, and they stood on the rock to the east of the church of Saint Macarius, and their swords were drawn in their hands, ready to kill men. And the bishops, [and the priests,] and the monks gathered together to him, and they told him what had taken place with the Arabs and Muslims, and they wanted to go forth from the desert before the festival of Easter. And Sinuthius (Shenuti) said unto them, “As for me, I will not leave the desert until the festival of Easter be finished.” And when the Fifth Day of the week had come whereon, according to the New Covenant of Joy, our Lord Christ washed the feet of His disciples, the number of the Muslims and the Arabs increased. When Abba Sinuthius (Shenuti) saw the terror of the people, he took up his staff whereon was the figure of the Cross, and he grasped it and willed to go forth to them, saying, “It is better for me to die with the people of God.” And the bishops and the monks seized him, and would not let him go out, and he strengthened their hearts and comforted them. Then he went forth to the Arabs and the Muslims, with his staff in his hand, and when the Muslims saw him they turned round and fled as if they were pursued by an army of soldiers; and from that day onwards those Muslims never came back to the monks and never did them any harm. Salutation to Archbishop Sinuthius (Shenuti), who put to flight Arabs, who were armed with swords, by the figure of the Cross only.
Glory be to God Who is glorified in His Saints. Amen.