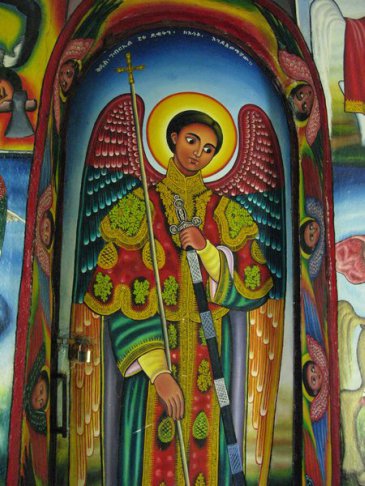 On this day died the holy father and fighter Abba Isaac, the disciple of the great father Abba ‘Eblo. This holy man renounced the world and all the pleasure and delight thereof, and went up to the desert of Scete, and became a monk; he was the disciple of Abba ‘Eblo, and he continued to minister unto him for five and twenty years. And he fought so strenuous a fight that at length his whole body dried up, but he retained possession of all his faculties. And he remained quiet (or, silent) at the times of prayer and the consecration of the Offering, and he stood timidly [in the church] with his hands clasped behind him, and his head bent; and he wept until the Office of the Offering was ended. And when he came out from the Offering, he never associated with any man at all during that day, and he never left the door of his house open lest any man should come and visit him. And when anyone asked him, saying, “Why dost thou never talk with him who wisheth to talk with thee at the time of prayer, and at the time of the Offering?” he answered and said unto him, “There is a time for everything, as is fitting.” And when the time of his death drew nigh the company of the monks gathered together to him so that they might be blessed by him, and might take refuge in his prayer. And when they asked him, and said unto him, “Why didst thou flee from men?” he answered and said, “I was not fleeing from men but from Satan. If a man taketh hold of lighted lamp, and standeth in the wind, will not the light be extinguished? Even so is it with us when our hearts shine at the time of prayer and at the time of the Offering. When we meet together and hold converse with each other our hearts become dark.” And this holy man having finished his spiritual strife and pleased God by his strife, and God having willed to give him rest from the toil of this fleeting world, he became a little sick and died in peace. Salutation to Isaac who loved ascetic labors and prayer, and fled from the face of a man, as from a wild beast.