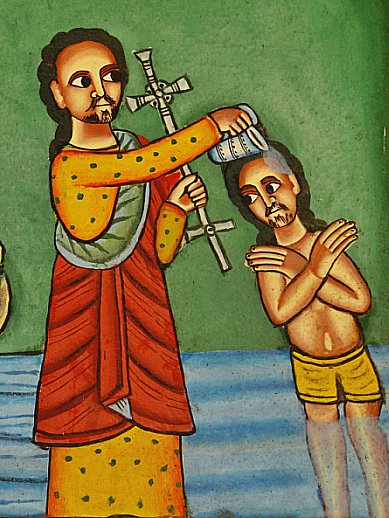 On this day is commemorated the first consecration of the church which was dedicated by the Jacobite Christians in the country of Egypt, in the name of Saint Nicolas, Bishop of the city of Mira, and one of the Three Hundred and Eighteen bishops and fathers who assembled in the city of Nicea. This church which was consecrated was outside the city of Alexandria, and it is well known by reason of the strife of Saint Abba Sinoda, and stands to the east of the city. This holy man was exceedingly great, and he confessed Christ before the government of Diocletian, and tribulation and many punishments came [upon him]. And God made him to remain until he came and joined himself to the holy General Council of Three Hundred and Eighteen [bishops and fathers]. And the miracles of this saint were exceedingly numerous, and they are known in all the ends of the earth. Salutation to Saint Nicolas.

And on this day also is commemorated Saint ‘Agabos, the apostle, who was one of the Twelve (Seventy-two disciples?), and whom the Book of the Acts of the Apostles (xi, 28; xxi, 10) mentions as the man who prophesied as to what should come upon Paul. He it was who also prophesied about the great famine which came in the days of Claudius Caesar, and his prophecy was fulfilled and the famine came, and with it pestilence, and destroyed many people. And behold we have already written an account of the strife of this holy man in the section for the fourth day of the month of Yekatit. Salutation to ‘Agabos, who prophesied that the Jews would bind Paul hand and foot.

And on this day also [is commemorated] the departure of the soul of Saint John the Baptist, after it had dwelt with him, and traveled about in the aether, for seventeen years. Salutation to John whose soul left him when his head flew up into the air.

And on this day also is commemorated the holy woman Alexandra, the martyr, the wife of Dudianus, the king, whom Saint George laughed at for casting incense to the gods. Now Dudianus imagined that he was faithful, and he embraced the head of Saint George, and he brought him into his royal palace. And Saint George prayed and read the Psalms of David before Queen Alexandra, and she asked him to interpret them to her, and he interpreted them and made clear to her the Godhead of our Lord Jesus Christ; and his words entered her heart, and she believed on the Lord Jesus Christ. And when Saint George had laughed at Dudianus he destroyed his idols, and he commanded the earth, and it swallowed them up, and Dudianus the king was put to shame. And he came to Saint Alexandra his wife in sorrow and sadness, for Saint George had put him to shame. And this holy woman said unto him, “Did I not tell thee not to set thyself against the Galilean Christians, because their God is strong and powerful?” And Dudianus was wroth with her, and he commanded the soldiers to torture her and to cut off her head; and they tortured her severely, and cut off her head with a sword, and she received the incorruptible crown of martyrdom in the kingdom of the heavens. Salutation to Alexandra, whose subjects tortured her, and laid a heavy stone upon her breasts.
Salutation to ‘Abib.
Glory be to God Who is glorified in His Saints. Amen.