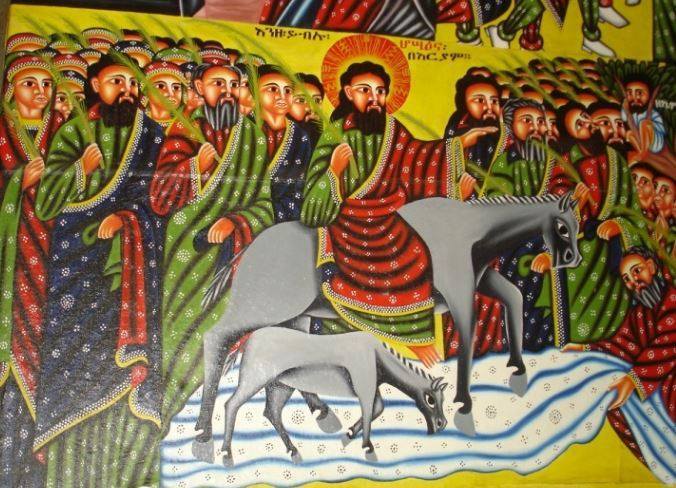 On this day Saint ‘Antibas (Antipas), Bishop of the city of Bar’ama (Pergamus), the disciple of John the Evangelist, the proclaimer of the Godhead, became a martyr. This holy man lived in the days of Domitianus, the son of Vespasianus, who laid waste Jerusalem. This Caesar destroyed the Jews who were in his dominions so completely, that not a Jew could be found therein, and he killed many royal children also, being afraid for his son, and his kingdom, and himself. And he heard that the Christians said that Christ was their God and King, and he was afraid and slew many of the believers, and John the Evangelist, that is to say, “preacher,” fled from him. And he sent to Jerusalem, and he made his soldiers bring the children of Judah to the city of Rome, the son of Yosef (Joseph) being bound in fetters. And when he had questioned them about the kingdom of Christ, they answered and said unto him, “It is a heavenly kingdom, and Christ will depart to heaven. And He shall come again at the last day, and shall judge the living and the dead, and He shall reward each according to his works.” And when the emperor heard this, he feared exceedingly, and he let the Christians go free, and did not afflict them in any way; and he ordered his people to pay them honor. Among the number of those who became martyrs through him was this holy man, whom he tortured with many severe tortures to make him to deny Christ, but under these tortures the faith and confidence of the saint increased. After this the emperor placed him in a bull of brass, and lighted a great fire under him, and whilst the saint was in it he continued to praise God, and to ascribe holiness to Him, and to thank Him for making him fit to become a martyr for His holy Name. And then he asked God to heal all the sickness, both of body and soul, of all those who should make mention of his name, and commemorate him; and he finished his martyrdom inside the brass bull. And when the infidels cast out his body, certain believers took his holy body with great honor, and singing, and music, and laid it in a church. When the saint was in prison angels came to him from Saint John the Evangelist, and they comforted him and they strengthened him [in the Faith], and they called him “faithful priest,” and “good shepherd,” and “martyr,” and they informed him that he was to become martyr. And they said unto him, “Thou shalt be numbered with the holy apostles and martyrs.” And it is said that from his holy body there exudeth perfume of an exceedingly sweet odor, to this very day, and that it is beneficial to all those who take it in faith.

Salutation to ‘Antibanis (Antipas), the disciple of John the Evangelist, who was martyred in a red-hot brazen bull. Anoint thou me, a sinful man, with the scented unguent, which distilleth from thy body.

And on this day also they commemorate Saba the martyr.