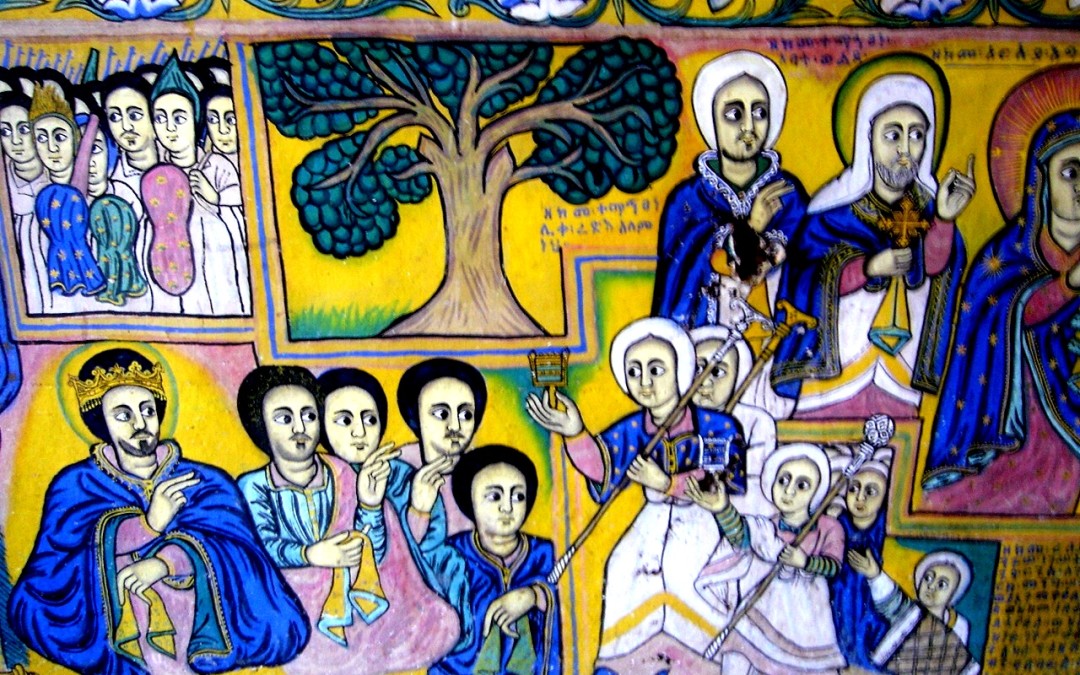 On this day Saint James the Apostle, and martyr, the brother of John the son of Zebedee, became a martyr, after he had preached in the country of Asia. When James went forth tonthe Twelve Tribes, which were scattered, he told them of the peace of God our Lord Jesus Christ, Who is in truth God. Among all these tribes there was none who worshipped God, but the people of each tribe had their own idols, which they had chosen as gods, and belonging to each graven image was a service of error, which made the people to go astray. And there was over the tribes a man set in authority under the kingdom of Herod, and he commanded that the people, wherever he found them, should work for him, and the money which he made them to bring to him was very much, and at length his position became great, and his rule widespread and powerful. When James came to them he preached to every tribe in the language of his country, for our Lord had endowed him with the knowledge of every language. He knew not only the language of men, but also thelanguage of sheep, and cattle, and wild animals, and the fowl of the heavens; and whenever the people held converse in their own languages, the apostle knew everything [they said], by the help of the Holy Spirit. And James preached among them, and he commanded them to put away their evil works from them, and to believe in the Living God, and in His only Son our Lord Jesus Christ, and in the Holy and Life-giving Spirit (through Whom [existeth] every created thing [and] the things which are in their souls), and Who shall judge the living and the dead. And he said unto them, “Give not all your goods to the kings of the earth, but give some to the poor for the salvation of your souls.” And at that moment the grace of the Holy Spirit dwelt in them, and the fear of God came into their hearts. And the story of Him was proclaimed throughout all their countries, for at the word of James the Apostle they believed on Him, and they became strong in the Faith in our Lord Jesus Christ, the King of heaven and earth, Who doth not reject those who seek Him, and who turn to Him with a right mind, but Who doth reject all those who believe on themselves, and in the evil works which they do. And he said, “Leave [these], and turn to God with a right mind.” And they accepted the words, which Saint James spoke unto them, and he loved them exceedingly because they made haste to receive his preaching; and they forsook many works of error, which they did formerly. And Saint James the Apostle made haste, and built a church for them in each of their countries, and when he saw the beauty of their Faith, he baptized them in the Name of the Father, and the Son, and the Holy Spirit, and they all rejoiced and were glad together. And he commanded them with the commands of the Gospel, and the Law of their Faith, and he said unto them, “I beseech you to let every tribe give to the church for its income the first-fruits of your crops and your vineyards, and [offerings] from your flocks, and they shall be to God as food for the poor.” And the people answered and said unto them, “We wish to do whatsoever thou commandest us”; and [one] tribe brought the first fruits of all their goods to the church. Now this tribe was under the dominion of Herod the king. And when Herod heard that it was Saint James the Apostle who had ordered this, he was wroth, and he sent and had him brought before him. And he said unto him, “Is it thou who hast commanded the people not to give tribute to Caesar, and not to give gifts to the king, and who hast commanded them to give away their goods in alms, and to the church, and to the poor?” And Saint James said, “Yea.” Then was Herod furious with him, and he smote him with the sword, which was in his hand, and he cut off his head; and Saint James received an incorruptible crown in the kingdom of the heavens. And there was a great tumult in Jerusalem, and the king took Peter, the chief of the Apostles, and shut him up in prison, and he decided to kill him after the festival of Easter was finished. And the angel of the Lord smote Herod and he died an evil death and his body stank; he glorified himself and did not glorify God. And certain believing men took the body of James the Apostle, and swathed it for burial, and they buried it in the sanctuary. Salutation to the brother of John, the Apostle and Evangelist, James, the glory and ornament of the Church. Salutation to thee, O thou who wast bound hand and foot in prison, Salutation to the festival of Easter.