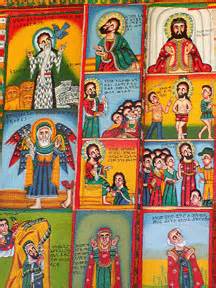 And on this day also died Roko. This holy man was such a strenuous fighter in the spirit that he made signs and miracles manifest. One day the sickness of the plague smote him, and he prayed to God with abundant tears, and showed Him his sores. And our Lord Jesus Christ appeared unto him, sitting upon a cloud of heaven, and He stood up before him and said unto him, “Fear not, O My beloved Roko, behold I have come unto thee to heal thee of thy sickness, and to establish with thee a covenant that all those who shall pray unto Me in thy name, saying, ‘Jesus Christ, the God of Roko, deliver me for I am afflicted,’ shall be free from the sickness of the plague, and it shall not come upon them.” After He had said this unto him, our Lord Jesus Christ went up into heaven. And the holy man lived in strict devotion to the ascetic life for many [years], and he died in peace. Salutation to Roko, the chosen fighter.
Salutation to Stephana, a friend of Victor the martyr. [Omitted in the Bodleian MS.]
Glory be to God Who is glorified in His Saints. Amen