Miyazia 25 (May 03)|THE ETHIOPIAN SYNAXARIUM 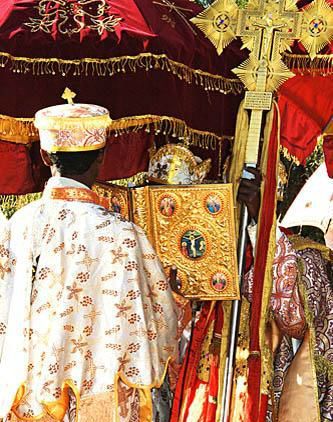 On this day Saint Sara and her two sons became martyrs. This holy woman was a native of the city of Antioch, and she was the wife of a certain man whose name was Socrates; now he was a governor of Diocletian, and a Christian. Subsequently he denied Christ, but his wife remained a Christian. And her husband said unto her, “I love the Faith of Christ, but I denied Him, because I am afraid of the emperor’s torturing.” And this holy woman brought forth by him two sons, and she was unable to have them baptized with Christian baptism in the city of Antioch, through her fear of the emperor, and through fear of her husband; but because of her exceeding great love for our Lord Jesus Christ she strove in every way possible to have her sons baptized with Christian baptism. And she took her two sons, and two slaves with her, and she embarked in a ship, wishing to go to the city of Alexandria, to Abba Peter, the archbishop. Now God willed to reveal the greatness of her Faith to the generation which was to come. And God raised up a wind at sea, and a very great and violent storm, and the storm was so violent that the ship was nigh to founder; and the holy woman was afraid that her sons would be drowned without being baptized. And straightway she rose up, and prayed a long prayer, and then she took a razor, and made a cut in her right breast, and she took some of her blood and made therewith the sign of the Cross upon the foreheads, and over the hearts, and on the breasts, and on the backs of both of her sons; and she dipped them in the sea thrice, saying, “In the Name of the Father and the Son and the Holy Spirit.” And after she had done this, there came a great calm on the sea. When she arrived in the city of Alexandria, she took her sons to Abba Peter, the Archbishop, that he might baptize them with Christian baptism, together with the children of the city. Having baptized one of the children of the city, he took her sons to baptize them, and straightway the water congealed, and fell off them. And he took another child of the city and the water became liquid, and he baptized him, and the water returned to its natural form. And the archbishop took the sons of this holy woman [a second time] to baptize them, and straightway the water congealed again; this he did thrice and the water congealed thrice. And he had their mother brought, and he questioned her, and thereupon she told him everything that had happened to her, and how the wind and storm had risen on the sea against her, and how she had cut her breast, and baptized her sons; and she asked him to forgive her sin, for it was because she was afraid that she had done [this thing].And Saint Abba Peter said unto her, “Fear not, for it is our Lord Jesus Christ Who hath baptized thy sons, with His own hand, when thou didst immerse them in the sea.” And when the holy baptism of her sons was completed by the hand of Saint Abba Peter, the Archbishop, they received the Holy Mysteries and she returned to her husband in the city of Antioch. When she came to him he was wroth with her, because of what she had done, and he went to the emperor and informed against her, and told him what she had done. And the emperor had her brought before him, and said unto her, “Why didst thou go to the city of Alexandria? Hast thou been playing the whore with Christians?” And the holy woman answered and said unto him, “Christians do not play the whore, and they do not worship idols; and after this do what thou wishest, for thou wilt not hear another word from me.” And the emperor said unto her, “Tell me what happened unto thee in the city of Alexandria,” but she vouchsafed him no reply whatsoever. And the emperor commanded his soldiers to tie her hands behind her, and to set her two sons upon her belly, and to burn all three of them together in the fire. And she turned her holy face to the East, and prayed, and then they burnt her, with her sons, in the fire, and she received the crown of martyrdom in the kingdom of the heavens. Salutation to Sara.
And on this day also are commemorated Dara, and Abba John the archbishop.

And on this day also are commemorated Saint Abba Babnuda, the anchorite, and Saint Theodore, the fighter, and one hundred martyrs who received crowns of martyrdom in the kingdom of Persia (or, Egypt). Salutation to Babnuda, and to father Theodore, and to four men in the country of Persia.
Glory be to God Who is glorified in His Saints. Amen.