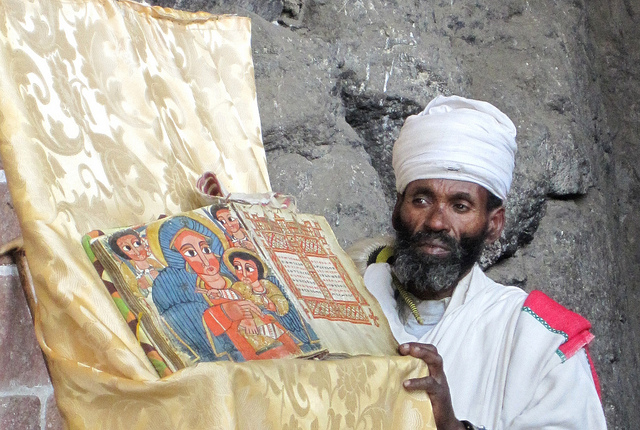 On this day Saint Susenyos, the son of Su’Epeter, became a martyr. The father of this holy man was a friend of the Emperor Diocletian the infidel, who was emperor. And the angel of the Lord appeared unto him, and strengthened his heart, so that he might become a martyr; and this thing was ever in his mind. And after this the emperor sent him to the country of Nicomedia, and he sent to him an edict ordering him to restore the worship of idols; when the saint saw this he sorrowed exceedingly. Then he sent and brought a priest, and he learned from him the doctrine of the Church, and the priest baptized him with Christian baptism. After this he returned to the country of Antioch, where he found that his sister had given birth to a child, whose creation (or, nature) had been changed by a Satan. She had given birth to a daughter, whom she had killed, and whose blood she had drunk, for there dwelt in her a Satan, who, by his magic, could take the form of a bird or serpent. When a child was born to any of the natives of the city, the mother used to go down, and kill him by magic and drink his blood. And when Saint Susenyos saw this, he took his spear in his hand, and killed his sister and her child also, for he was the son of Satan; and he killed her husband, and her husband’s father, for they were magicians, and they used to inflict sicknesses on a man and kill him. After this he returned to Nicomedia, and he came to that priest who had baptized him with Christian baptism, and told him everything that had happened to him. When he returned to his city, and his father knew it, he wanted to kill him, and he accused him to the emperor [of being a Christian]. At that time Saint Susenyos went to the emperor in the house of his idols, and he commanded the idols, by the power of our Lord Jesus Christ, to descend into Sheol; and straightway the earth opened her mouth, and swallowed them up. And the story of how Saint Susenyos had destroyed their idols was noised abroad, and again his father made accusations against him before the emperor. And the emperor was wroth with him, and commanded his soldiers to torture him with severe tortures. And they beat him, and smote him with brass rods, and they broke him on the wheel, and they crushed him with the instruments wherewith grain is crushed, and they dragged him through the city. And God strengthened him, and enabled him to endure all these tortures, and the angel of the Lord visited him at all times, and strengthened him and healed his wounds, and raised him up whole and uninjured. And many men, who believed on our Lord Jesus Christ through him, became martyrs. When the emperor was tired he said to one of his men, “Behold, command them to cut off his holy head with the sword,” [and they cut it off,] and he received the crown of martyrdom in the kingdom of the heavens. And the number of those who became martyrs, during the time they were torturing the saint, was eleven hundred and ninety. Salutation to Susenyos, the son of Su’E Peter, and salutation to the eleven hundred and ninety martyrs of the company of Susenyos.

And on this day also John, the son of a carpenter, became a martyr. This holy man was a native of the city of Nineveh, and his father was a maker of wooden images, and a worshipper of idols; his mother was a Christian. Lacking a son she prayed to God, and she brought forth this saint, and called his name “John” in secret. When he was eight years of age, he helped his father, who bought wooden figures for his son to carve. One day as he was going about buying idols, the angel of the Lord met him, and told him that idols were the abode of Satan, and commanded him to cast them from his hands; and he taught him the Faith of our Lord Jesus Christ. And Saint John returned to his father and said unto him, “There is no god but God, the Creator of the heavens and the earth; I will not worship the work of men’s hands.” When his father heard this, he tied him up in the prison house. And his mother came and made his heart strong to shed his blood for the Name of our Lord Jesus Christ. Then the people of the city came to persuade him with their words, and they said unto him, “O boy, why dost thou forsake thy father’s gods?” And Saint John said unto them, “I will not worship the work of men’s hands, for [idols] are the abodes of filthy devils.” When his father heard his words he took up his saw, and cut off his son’s head, but the young man did not fall down, and he stood upright on his feet, and was baptized with his own blood. And his mother came and took [his body, and she said], “O my Lord Jesus Christ, for Whom praise is meet, receive Thou from me this offering, O Thou Who didst accept the offering of Abel in the field.” And Satan entered the heart of his father and made him mad, and his wife took him, and brought him to the grave of her son, and prayed for him. And Saint John came by night, and pierced his father with a spear, and Satan went out of him, and then he believed and was baptized in the Name of the Father and the Son and the Holy Ghost. Salutation to John of Nineveh, who was a lamp which dispelled the dense darkness of sin.
And on this day also were martyred the saints Sebbidoras, and Abba Serga, and Dereys (Dirayes), and Says.
Glory be to God Who is glorified in His Saints. Amen.