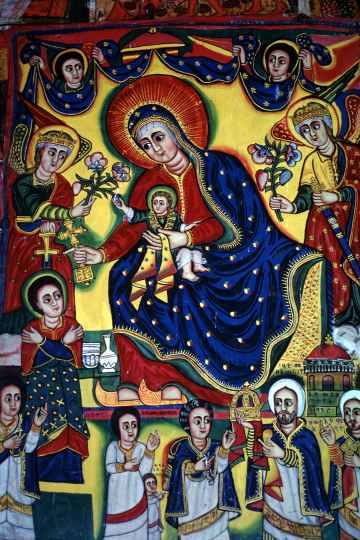 And on this day also are commemorated Saint Hannah, the mother of our Lady Mary, and Hannah the prophetess, the daughter of Panuel.

Salutation to the three virgins Pistis (Faith), ‘Alapis (Hope), and ‘Agapis (Charity), who suffered martyrdom, but whose beauty was unspoiled by the smoke, and whose bodies were unconsumed by the fire.

And the fathers have commanded that on this day the people shall celebrate the commemoration of the honorable men Joseph and Nicodemus, who were held to be worthy to become ministers of the Divine Mystery.  And they brought down from the Cross the Body of our Lord Jesus Christ, the Son of the Living God, when He had fulfilled the Law of the Incarnation in every respect, with the exception of sin, and He had accepted suffering and death for the sake of the salvation of the [world].  So little did the terror of the Jews frighten them that they asked Pilate to give them His Body, and when Pilate gave them permission to carry Him away, they took Him down from the Cross, having withdrawn the nails from out of His hands, and His feet, and they bore Him away on their shoulders.  And they heard a voice which came forth from His dead Body, saying, “Holy is the Lord, Holy is the Power, Holy is the Life Which dieth not, and which the holy Virgin Mary bore!  Have compassion upon us, O Lord.  Holy is the Lord, Holy is the Power, Holy is the Life Which dieth not, which was baptized in the Jordan, and was hung upon the wood of the Cross.  Have compassion upon us, O Lord.  Holy is the Lord, Holy is the Power, Holy is the Life Which dieth not, Which was raised up from the dead on the third day, Who went up into heaven with praise and sat down on the right hand of His Father, Who shall come again to judge the living and the dead.  Have compassion upon us, O Lord.  Glory be to the Father.  Glory be to the Son.  Glory be to the Holy Spirit, now and henceforth and forever.  Amen.  So be it!  So be it!”  And when they heard this their Faith in Christ was strengthened.  And Joseph brought linen cloths, and Nicodemus brought perfumed unguents, and they wrapped our Lord in them, and buried Him in a new grave.  And this Joseph was kinsman to Nicodemus, the brother of Cleophas, the kinsman of Stephen the martyr.  And Nicodemus was the Phrisee, and the legate of the Jews, who went by night to our Lord Jesus Christ, and . . . His coming from heaven.  And our Lord told him that it was impossible for a man to enter into the kingdom of the heavens, who was not born of water and of the Holy Spirit; and Nicodemus used frequently to rebuke the Jews when they derided the words of our Lord.  And after His Resurrection, as they were travelling along the road to Emmaus, it was these two, Cleophas and Nicodemus, whom our Lord met; and they told Him everything which had happened in Jerusalem, without recognizing Him.  And He told them that the prophets had prophesied concerning His Death and Resurrection; and then when they recognized Him, He disappeared from them.  And they brought His words to His disciples.  And Joseph the Jews bound fast in prison, and they wanted to kill him, because he had buried our Lord.  And although the door of the prison was sealed with the seal of Pilate, and with the seals of the high priests, our Lord Jesus came to the place where Joseph was, and He was mounted on the chariot of the Cherubim, and with Him there were thousands of thousands, and tens of thousands of tens of thousands of angels, and Seraphim standing round about Him, and burning incense before Him.  And the thief who was on His right hand stood on the right of Him wearing shining raiment, and he was making intercession for sinners, because he had found favor before Him; and the keepers of the house were terrified, and trembling seized them.  And then our Lord cried out to Joseph and said unto him, “Be not afraid of the terrors of the Jews.  Behold I have come to unloose thy bonds.  I am that Jesus, the Nazarene, in Whose suffering thou didst participate.  Look at the nail [marks] in My hands and feet, and the mark of the spear in My side, so that thou mayest know that of a truth I am He.”  Then He caught up Joseph from that place, and took him to the city of ‘Armatyas.  And the keepers of the prison house, having gone to Pilate, told him everything, which they had seen, and what they had heard from the mouth of our Lord, and how He had set free Joseph and taken him away with Him.  And when the high priests went [there] they found the doors of the prison open and their seals unbroken.  And these saints continued to preach the Gospel with the Disciples, and very much tribulation came upon them; and then they died in peace.  Salutation to Joseph the rich man who begged the Body of Jesus from Pilate.  Salutation to Nicodemus who believed on the Son of Mary.