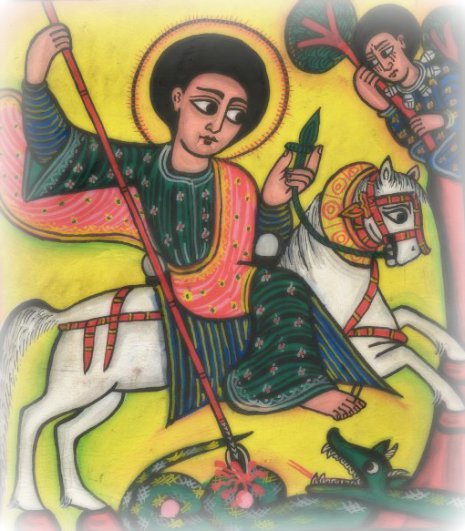 And on this day also died Saint Sophia.  This saint was a kinswoman of a race of kings, and she had riches and possessions, and she crossed the Sea of Rome with her three daughters to received the seal of Christ.  And the Emperor Andrianus, knowing that she was a Christian, had her and her daughters brought before him, and questioned her about her country and her name; and she said unto him, “The name which comes first with me is that of ‘Christian’; as for what my kinsfolk call me, it is ‘Sophia,’ and I am of a noble family of Italy.  And the Lord Jesus Christ hath in His mercy brought me into thy city, that I may offer myself and my daughters as an offering.”  And she encouraged her daughters, and bade them not to fear the tortures.  And after this her three daughters finished their testimony, and she wrapped them in shrouds and buried them outside the city.  And she went out to celebrate the commemoration of her three daughters with many other women of the city, and when she arrived at their graves, she bowed down and prayed, saying, “O my perfect daughters who are crowned with crowns incorruptible, may I too receive a crown with you!”  And having said thee words she died in peace, and was buried with her daughters.  Salutation to Sophia.

Salutation to the translation of the body of Mercurius, the fighter, which was taken to a new grave on the backs of three oxen.