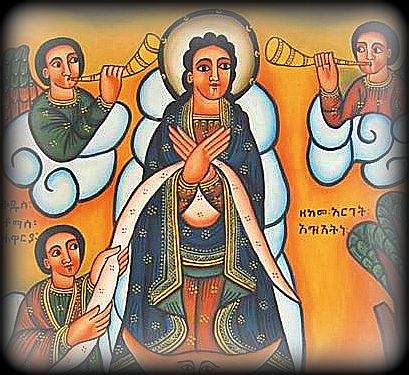 On this day died King Hezekiah, son of Ahaz, of the seed of David, of the tribe of Judah. After David, the prophet, there was never appointed any king over the children of Israel like unto this saint, for all the kings of Israel worshipped idols, and built altars to them, with the exception of this king.  When he reigned he broke the idols, and laid waste their altars, and broke in pieces the serpent of brass because the children of Israel worshipped it; and because he had done the things which were good God rewarded him by adding greatly to his days.  In the fourteenth year of his kingdom Sanakrem (Sennacherib), the King of Fars (Persia), came and besieged Jerusalem.  Now Sanakrem (Sennacherib) was a very great and most powerful king, and there was no king as strong and mighty in his days, and all the [other] kings were afraid, and were subject unto him.  And Hezekiah was afraid of him, and sent to him much money and tribute; but Sanakrem (Sennacherib) was not pleased with him, and would receive nothing whatsoever from him.  And Sanakrem (Sennacherib) sent an angry message to Hezekiah, and he uttered many threats against him, and promised that he would destroy him, and blot out his city.  And he reviled God, the Glorious and Most High, with his foul tongue, saying, “God is not able to deliver thee out of my hand”; and then he sent to Hezekiah two letters, wherein were written wrathful blasphemies.  And Hezekiah wept, and rent his garments, and he put on hair sackcloth, and sent into the house of God and prayed before Him, saying, “Thou O God knowest what Sanakrem (Sennacherib) the king and his messengers are saying, this king worshipeth the gods of the land which are of wood and stone, but Thou, O God, alone art the Lord God, the Sustainer of the Universe.”  And then Hezekiah sent a letter to Isaiah the prophet, and made him to know what Sanakrem (Sennacherib) the King of Fars (Persia), was saying; and he asked him to pray for him.  And Isaiah answered him with the word of God, saying, “Be of good courage and fear not, for God is about to do unto Sanakrem (Sennacherib) an awful thing, the like whereof hath never been heard of in all the earth.”  And that night Michael, the angel of God, came down from heaven, and slew in the camp of Sanakrem (Sennacherib) one hundred and fourscore and five thousand men in a moment.  And when [the Persians] woke up and found that their hosts were slain, those who were left of the slaughter fled to the country of Fars (Persia), together with the king.  And Sanakrem (Sennacherib) came into [the temple of] his gods to pray, and his sons rose up against him and slew him, and Hezekiah escaped from his hand and praised God.  And when the time drew nigh for Hezekiah to die, Isaiah the prophet came unto him, and found him lying sick of a most serious sickness, and he said unto him, “Give commands to thy sons, for behold, thou shalt die.”  And Hezekiah prayed before God, and God sent Isaiah unto him a second time, and made known to him that God had added to his days another fifteen years; and when he required from Isaiah a sign, he made the sun to go back for him on the sun-dial.  And all the kings of the earth were afraid of Hezekiah, and they brought tribute unto him, because they knew that God was with him; and he continued in his kingdom nine and twenty years, and all the days of his life were four and fifty years, and he pleased God [and died] in peace.  And the prayer of the saint, which he uttered through the Holy Spirit when he was healed of his sickness, is written in the Psalms of David.  Salutation to Hezekiah.

And on this day also died Abba Matthew, the anchorite.  This saint dwelt in the desert, and wore hair sackcloth, like a sheep, and he taught Marmehnam to believe on Christ, and he cleansed Sara of her leprosy.  Salutation to Matthew.