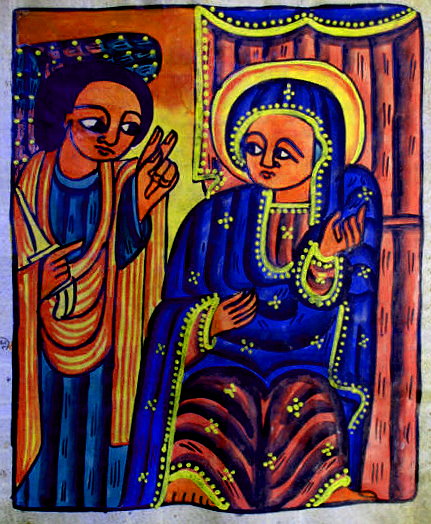 On this day Saint Justa (Iyalota) became a martyr.  This spiritual fighter came from the country of Caesarea in Cappadocia, and she inherited from her parents many possessions; but a certain oppressor robbed her and took away all her money, and possessions, and slaves, and handmaidens by bribery.  And when that robber knew that the saint wished to inform against him, and expose his sins, and his lying words, he informed the governor of Caesarea that she was a Christian.  And she said within herself, “The possessions of this world are fleeting things; are they anything at all?  And behold, they have robbed me, and taken them away by force; but if I gain possession of the habitation which is in heaven, no one will be able to take it from me.”  And when she came to the governor and stood up before him, she confessed boldly, saying, “I am a Christian, I believe on the Lord Jesus Christ, the Son of the Living God, and Creator of the heavens and the earth and of all that in them is.”  And the governor was wroth, and he commanded the soldiers, and they cast her into the fire, and she delivered up her soul into the hand of God.  And the fire neither touched her, nor harmed her in the least degree, and they took her body out of the fire as if it had come forth from water.  And instead of her money and possessions, she received an everlasting and never ending kingdom; and Saint Basil praised her greatly.  Salutation to Justa.

And on this day also died the holy father and spiritual fighter Abba Wisa, the disciple of Abba Sinoda, and he lived under his authority for many years.  And Saint Abba Sinoda revealed unto him many of the mysteries, which he had heard from our Lord Jesus Christ; and Abba Wisa wrote the history of the fight of Abba Sinoda, according to what he saw and what he heard from him.  And having finished his good course, and pleased God, he died in peace.  Salutation to Abba Wisa.

And on this day also died Saint Mary Magdalene.  This saint followed our Lord Jesus Christ, and He cast seven devils out of her, and she ministered unto our Lord and followed Him, and she also followed the Apostles; and she was present at the time of the Passion, and the Crucifixion, and Death and Burial of our Lord.  And on the following day, at early dawn, she saw the stone rolled away, and the angel sitting upon it, and she and Mary, the mother of our Lord, being afraid, the angel said unto them, “Be not afraid, behold I know that ye are seeking Jesus, Who was crucified.  Behold He hath risen, He is not here.”  And our Lord also appeared unto this Mary and said unto her, “Go ye and tell My brethren, that I have ascended to My Father, and your Father, and My God and your God.”  And this saint came and told the Apostles about the Resurrection of our Lord and Redeemer, and she told them how she had seen our Lord, and she told them how He had spoken to her; and she boasted over them how she had seen our Lord and told them how He had spoken unto her.  And after the Ascension of our Lord, she continued to minister unto the Apostles, and the grace of the Holy Spirit Paraclete descended upon her together with them, even as Joel saith in his prophecy, “Your sons and your daughters shall prophesy, and I will pour out my Spirit upon My menservants and maidservants” (Joel ii, 28).  And she preached with the Apostles, and she converted many free women, and many slave women, to the Faith of our Lord Jesus Christ.  And the Apostles made her a deaconess because of her teaching of women, and she baptized them; and great tribulation came upon her, and opprobrium, and scourging, and much disgrace through the Jews.  And she continued to minister to the Apostles until she died.  Salutation to Mary Magdalene.

Salutation to Tekle Michael, the singer of hymns and psalms from his youth up.  Salutation to the dedication of thy house and to the translation of thy body; neither the teeth nor the claws of wild beasts, or lions, or leopards could harm thee.