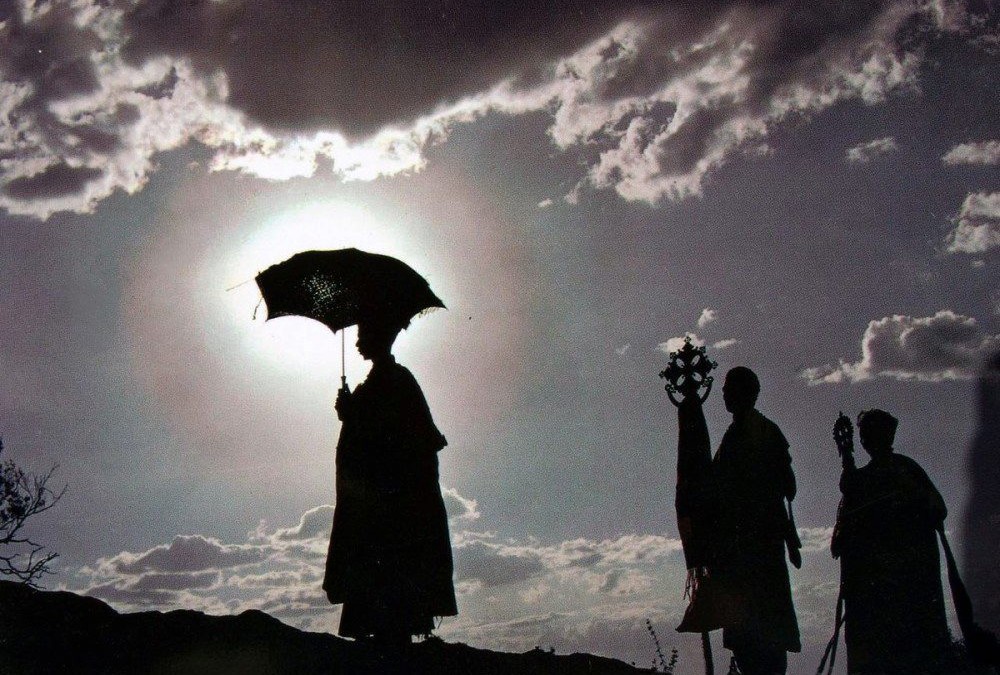 On this day God sent the great angel Gabriel, and he spoke unto Joachim the righteous man, saying, “Behold, thy wife Hannah shall conceive, and she shall bear thee a daughter, and in her shall be joy and salvation for all the world”; which actually took place through Mary, the bearer of God in the flesh.  This righteous man Joachim, and his wife Hannah, were very old in days, and they had produced no child, for Hannah was barren, and they were exceedingly sorrowful because of this, for the children of Israel used to thrust aside him that had not begotten a son, and would say unto him, “O thou who lackest the blessing of God.”  Because of this the hearts of this righteous man and his wife were sad, and they fasted, and prayed, and entreated God frequently by day and by night [for a child]; and they had reached old age and had become old.  And they begged and entreated God frequently, and they vowed a vow to Him that if they got a child they would make him a ministrant in the Temple of God.  And Joachim was in the sanctuary praying frequently and making supplication, and behold, slumber descended upon him and he slept, and Gabriel, the angel of God, appeared unto him, and told him that Hannah his wife would certainly conceive, and bear a daughter wherein he would rejoice, and because of whom his eyes would sparkle; and likewise all the world would rejoice, and be glad and would be saved through her.  And when he woke from his dream he came to his house, and told his wife the vision which he had seen during sleep; and she conceived forthwith, and brought forth our holy Lady, the Virgin Mary, the God-bearer, the object of boasting of all the world.  Salutation to thy spiritual conception, O Mary.

Salutation to Aaron, the brother of Moses.

And on this day also is celebrated the festival of the honorable Apostle Peter, the head of the Apostles, for in it he confessed among the Disciples, saying, “Christ is the Son of God.”  And when our Lord had brought them outside the city of Caesarea of Philippi, even as the Holy Gospel saith, He asked them what men said about Him.  He knew all the thoughts and hearts of men, but He took them outside the city by themselves, so that they might talk out what they were thinking in their hearts about Him.  Now the Apostles were divided among themselves.  Some of them said that He was Elias, and some said that He was one of the early prophets.  And Peter was wroth with them, and said unto them, “Nay, He is Christ, the Son of the Living God.”  And when our Lord knew this He brought them outside the city by themselves, and He asked them, saying, “What do men say about Me?”  And they said what was in their hearts, and some of them said, “One of the prophets.”  And our Lord said unto Peter, “And thou, what dost thou say and confess?”  And he said, “The Apostles have talked when they were by themselves, and they say, ‘Thou art Christ, the Son of the Living God.’”  And because of this our Lord entreated him kindly, and gave him the keys of the kingdom of heaven, that he might loose and bind; and from that hour Peter became the head of all the Apostles.  And he took the place of our Lord in the city of Rome, and his position was above that of the chiefs of the world, and of Archbishops, and Bishops, and Priests, and Deacons, and every other order of the priesthood.  Glory be to our Lord Jesus Christ.  Salutation to Peter, the chief of the Apostles and of all the priesthood of the world.

And on this day also died the holy father, Abba Timothy, the twenty-sixth Archbishop of the city of Alexandria.  God chose this saint, and appointed him Archbishop of the city of Alexandria, after the holy father and spiritual fighter Dioscoros died.  And great tribulation came upon him, and they drove him out into exile in the island of Gagra, whither they had driven Dioscoros the Archbishop, who had lived there before Abba Timothy for six years.  And then the Emperor Leo sent and brought him back from exile with great honor.  And after Marcian had become emperor, he appointed an Archbishop of Alexandria.  And after Marcian died, the men of Alexandria rose up against the archbishop whom Marcian had appointed, and killed him; and [they] appointed Timothy archbishop according to the command of Abba Dioscoros.  When Leo, the son of Marcian, became emperor he appointed Archbishop of the city of Alexandria one who was called Timothy, and ‘Abbas, the Archbishop, he exiled to the island of Gagra, the place where he exiled Dioscoros; and he lived there for ten years, till Leo died and Zeno reigned.  And Timothy the wicked one fled from Alexandria, and Abba Timothy returned to the city by the emperor’s command with great honor.  And he taught the people continually, and rebuked them, and encouraged those who believed in the True Faith.  He lived in peace and quietness all the days of his office, and he sat upon the throne of Mark the evangelist for two and twenty years; and he pleased God and died in peace.  Salutation to Timothy.

And on this day was born Joseph, the son of Rachel.