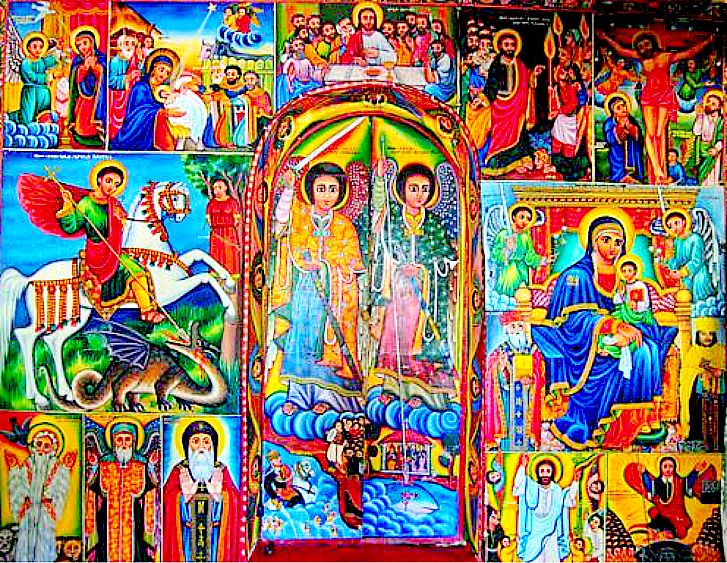 On this day Saint Matra became a martyr in the days of Demetrius, Archbishop of the city of Alexandria, and in the days of the Emperor Decius, who denied Christ.  When this saint had read the Edict which order [all men] to deny Christ, and to worship idols, he went and stole the arm of the idol Apollo, which was of gold, and he broke it into little pieces, and gave them to the poor and needy; and when they (the priests) searched for the idol’s arm, and could not find it, they seized many men because of the theft.  And at that time this saint came to the governor and confessed before him, saying, “I am he who stole the arm of the unclean idol, and I gave it to the poor”; and when the governor heard this he punished him with great severity, and tortured him.  And then he cast him into a red-hot oven, but God delivered him there from, and brought him out sound and uninjured.  And then they cut off his hands and his feet, and they roasted his body with fire, and they hanged him upon a tree, head downwards, until much blood ran down from his mouth upon the ground.  And at that moment the angel of God came down from heaven, and released Saint Matra from hanging, and touched his body with his hand, and healed his wounds.  And a certain man who was blind came and took some of the blood which was flowing from the nose and mouth of Saint Matra, and he smeared his eyes therewith, and he saw forthwith.  And when the governor was tired of punishing him, he commanded the soldiers to cut off his head with the sword, and they cut off his head and he received the crown of martyrdom in the kingdom of the heavens; and his body became a means of great healings for the sick.  Salutation to Matra.

And on this day also Saint Christopher became a martyr in the days of Maximianus, the wicked emperor.  And when the emperor had him set before him, he said unto him, “Offer sacrifice to the gods,” and Christopher said unto him, “I worship my Lord Jesus Christ and to Him I offer up sacrifice.”  And Maximianus was wroth with him, and commanded the soldiers to beat him with rods until his flesh dropped on the ground, and then they cast him into prison.  And then he sent unto him two women to lead him astray with their beauty, but the saint taught them the Faith of Christ and made them believers. And when they came back Maximianus said unto them, “What did ye do?”  And they said unto him, “We believe in Christ, the God of Saint Christopher.”  And when the governor heard this he commanded the soldiers to hang one of them on a tree and to burn her with fire, and to tie a stone to the neck of the other and to hang her, head downwards; and thus they finished their martyrdom.  And then he called Christopher, and they gathered together old, dry wood, and set it on fire, and they cast the saint into the flames, his hands and his feet being bound, but the fire did not touch him.  And when the people saw this, they all believed, and ten thousand men were slain.  And they also brought plates of iron made red-hot, and they made the saint to stand upon them, but it injured him not.  And when the men of Rome saw [this] they believed on our Lord Jesus Christ, and twenty-thousand and two hundred of them, and forty children, believed and became martyrs.  And when Maximianus saw that all the people believed, he was wroth with Christopher and commanded the soldiers to cut off his head with the sword.  And having gone forth from the emperor’s presence, the saint made a prayer, and sealed his face with the sign of the Cross, and then the soldiers cut off his head with the sword and he finished his martyrdom.  Salutation to Christopher.

And on this day also Saint Bikabos and John became martyrs.  Bikabos was from the city of ‘Esmutenakha, and he was a soldier; he was a Christian in secret, and one told Antiochus the governor about him and about the Bishop Abba ‘Aklog, and about Abba Nakharew, who was from the city of Tarsa, and about Abba Philip.  And when one informed the governor that they were Christians, he had them brought before him, and he said unto them, “Are ye Christians?”  And they confessed our Lord before him and said, boldly, “Indeed we are Christians, and we believe on our Lord and Redeemer Jesus Christ, the Son of the Living God.”  And the governor said unto them, “Put away this thing from you, and offer sacrifice to the gods.”  And the saints answered and said unto him, “We will not sacrifice to unclean idols, which are to be rejected, we will only sacrifice to our Lord Jesus Christ, the Creator of the heavens and the earth.”  And when the governor heard this he was exceedingly angry, and he tortured them very severely.  And he tortured Saint Bikabos severely, and often, and he bound him in iron fetters, and threw him on the wheel, and hanged him, head downwards, and cut off his limbs; and God strengthened him to endure, and He raised him up whole and uninjured.  And after this the governor sent the saint, with many other martyrs, to the city of Baramun in a ship, and for sixteen days he neither ate bread nor drank water.  And when they came to the city of Baramun the soldiers tortured the saint very severely, and then they hacked his body in pieces, and he finished his martyrdom, and received his crown in the kingdom of heaven.  And a certain rich official of the city of Baramun took the body of the saint and wrapped it up in costly cloths, and sent it to the city of ‘Esmunatekha.  And in the days of his torturing an innumerable multitude of people became martyrs, and through his finishing his martyrdom five and ninety souls became martyrs.  And they built a beautiful church for Saint Bikabos, and they laid his body therein, and many signs and wonders took place through it.  Salutation to Abba Bikabos.

Salutation to the ancient Lawgivers and to the Evangelists who followed after them.

Salutation to the three thousand, two hundred, and twenty men and two women, who suffered martyrdom through Christopher.