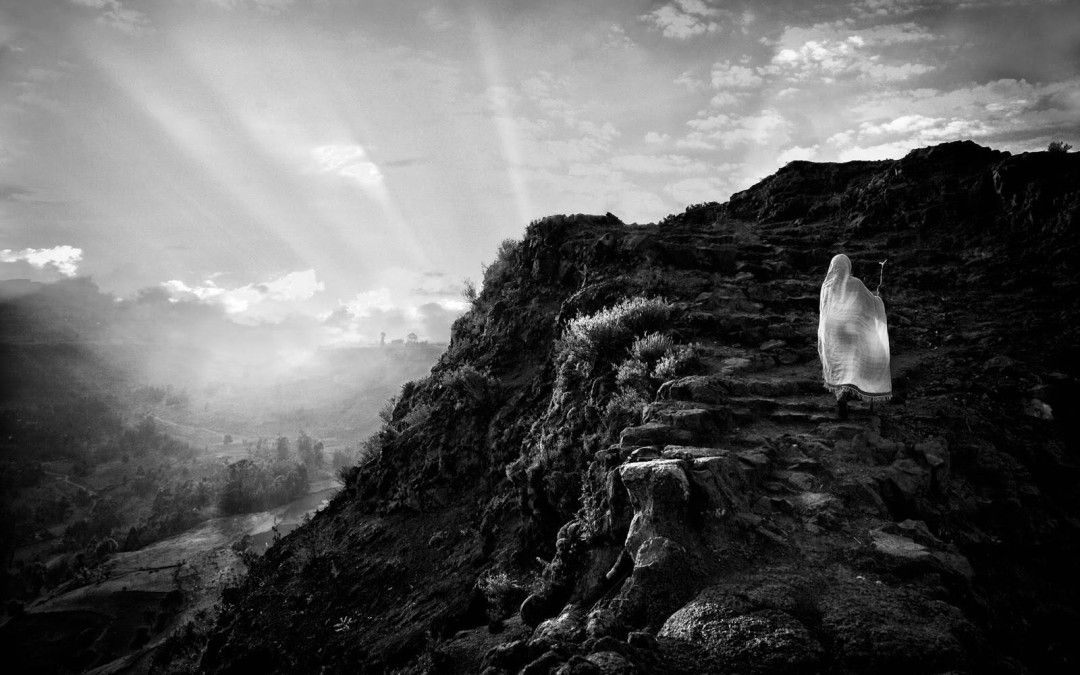 On this day is celebrated the festival of our Lord Jesus Christ, and how His appearance was changed on Mount Tabor, when there were with Him three of His disciples, that is to say, Peter, and James, and John.  And our Lord said concerning them, “There stand here those who shall not taste death until they see the Son of God and of man coming in His glory.”  This is the glory wherein the Apostles saw Him.  His apparel was white as snow, and His countenance was changed and became like lightning, emitting light.  And behold Moses and Elias came to Him, and they talked with Him that all men might know that He was the God of Moses, whom He had raised from the dead, and the God of Elias, whom He had brought down from heaven (sic).  And because of this Peter said unto our Lord, “Dost Thou wish, O Lord, that we should make here three tabernacles, one for Thee, and one for Moses, and one for Elias?”  In these words, which Peter spoke, there is a sign of lowliness and humility.  He saw our Lord, and thought that He would live on the mountain . . . and he wished to make for Him a place where He could hide from the sun.  Peter did not wish for himself, and for his fellow-apostles, as he wished for our Lord, and for Moses, and for Elias; but he made himself and his fellow-apostles like slaves of those lords.  And marvel not at the little knowledge of the apostles, for they were not perfect in knowledge at that time.  And when Peter said this, a cloud overshadowed them, so as to make it clear to Peter that He did not want a habitation made by the hand of man.  And a voice came forth from the cloud which confirmed the belief in the Godhead of our Lord in the minds of the apostles, saying, “This is My Son, Whom I love, in Whom I am well pleased; hear ye Him.”  And Moses and Elias talked with Him, and they confessed His grace and His goodness, for by the coming of our Lord and by His going up upon the mountain [the truth] of the prophecy of the prophets was made known of a certainty.  And the apostles and the prophets rejoiced, for they saw His Incarnation which they had known not of, and the apostles rejoiced also when they heard the voice of the Father, which they had never before heard.  They heard it at that time, and by the voice of the Father they became certain of the Incarnation of our God the Son, which was hidden from them; and when they heard the voice of the Father the glory of the kingdom appeared, and the apostles knew that it was our Lord Jesus Christ Who had raised up the soul of Moses, and that it was He Who had brought up Elias, for verily none save God Who buried him knew where the grave of Moses was, and none save He Who had brought him up to heaven knew where Elias was.  And none was able to make the dead to live save Almighty God, Who hath dominion over the heavens and the earth.  And Mount Tabor is a similitude of the Church, and our Lord gathered together therein the Two Laws, the New and the Old.  And when the disciples heard the voice of the Father, they fell down and became like dead men; and Moses returned to his grave, and Elias went up to heaven.  And our Lord Jesus Christ stood alone, for the voice came because of Him, and the prophets were frightened and the apostles fell down upon their faces, for the Father revealed the Name of His son, and that He existed for ever with His Father.  Because of that voice the Apostles preached that He was God indeed, and also that the flesh (or, body), which He had put on, was of the race of the children of man.  And in the Gospel our Redeemer preached saying . . .. If He was not flesh, why did the angel Gabriel say unto Mary, “God be with thee!”  And if He was not flesh, Whom did they lay in the manger?  And if He was not God, Whom did the angels praise when He went down from heaven on the day of His birth, saying, “Glory to God in the heights, and peace on earth, His goodwill to man.”  If He was not flesh, Whom did John baptize in the Jordan?  And if He was not God, Who was it that raised up Lazarus from his grave?  It was Christ, the Only Son, the Word of God.  We confess that He is perfect God and perfect man, One Person without separation.  And when the apostles fell down upon the earth, and became like dead men, our Lord touched them with His Life-giving hand, and He said unto them, “Rise up, and fear not.”  And they rose up straightway, and they lifted up their eyes and saw no one except our Lord Jesus Christ, Who was alone.  Salutation to Debre Tabor, which is called Debre Telul.

And on this day also was the martyrdom of Saint Safrira, the daughter of Moses the prophet.

And on this day also died Abba Galyon, the spiritual fighter.  This saint was a spiritual fighter, and he ceased from prayer neither by day nor by night.  He used to eat one meal only during the whole week, and from the time, when, as a young man, he became a monk until he became an old man, he never went outside the court of the monastery; and none of the brethren ever saw him except at prayers.  And when Satan saw his spiritual fight, he took the forms of monks and they came to him at the time of midnight, and said unto him, “We are dwellers in the desert and recluses; one of us having died, we want to take thee with us, and we have come to thee.”  And Abba Galyon thought that their words were true, and he went with them until they brought him to the top of a desert mountain, where there was no food; and when he saw that they were making a mock of him, he made the sign of the Cross over his face, and they disappeared from him.  And having turned to this side and to that, he lost the road whereon he should go, and he prayed a long prayer, and then there appeared unto him some holy monks from the monastery of Abba Sinoda, who were going about from one monastery to another singing the Psalms of David, and they asked him questions about his actions.  And when he told them his story they took him with them, and he dwelt a full year with them, and ate fish dried in the sun.  And Abba Isaac, his teacher, who had made him a monk, lacking news of him, asked God to be allowed to see his face [again]; and Abba Galyon knew this by the spirit, and went to him.  And when Abba Isaac saw him, he rejoiced and said unto him, “Where hast thou been?”  And Abba Galyon told him everything, from the beginning to the end.  And then at the time of his death the brethren came, and wrapped him in cloths and buried him.  Salutation to Abba Galyon.

Salutation to Benjamin, who by reason of his spiritual excellence was caught up in the body [to heaven].