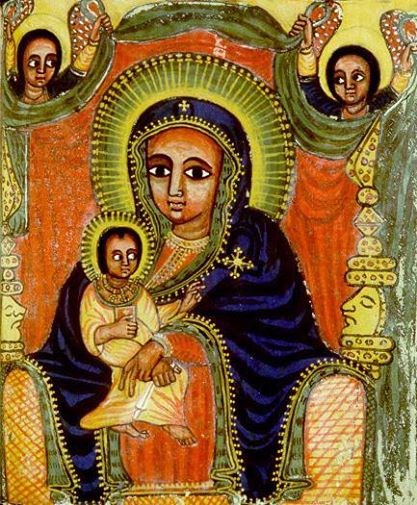 And on this day God worked a great miracle in the city of Alexandria, (by reason of which many Jews believed,) by the hand of Saint Abba Theophilus, Archbishop of the city of Alexandria, brother of Saint Cyril.  Now the miracle was this:  There was in the city of ‘Esmadreya a very rich Jew whose name was Falskinos, who feared God and performed the Law of Moses, according to his ability.  And there were in the city of Alexandria two men who were Christians, and they were poor and earned their living with their hands.  And Satan brought into the heart of one of them a blasphemous thought, and he said unto his companion, “O my brother, why do we serve Christ and [remain] poor, whilst this Falaksinos who is a Jew, is exceedingly rich?”  And his companion answered and said unto him, “O my brother, know that the possessions of this world are nothing before God.  For if He had power over them, He would not give them to the worshippers of idols, and to whoremongers, and to thieves, and to murderers.  The prophets were poor men and lived in tribulation, and also the Apostles, and our Lord saith, ‘The poor are My brethren.’”  And Satan, the hater of good things, would not permit that man to receive any of these words, but he stirred him up, and he went to that Jew Falaksinos, and he asked him and said unto him, “Let me be thy servant.”  And the Jew answered and said unto him, “It is not convenient to me for thee to serve me.  I only want a servant who believeth my Faith, and who is my own man.  If thou dost want alms, I will give thee money, and [then] depart.”  And that wretched man answered and said unto him, “Take me into thy house, and I will do whatsoever thou commandest me.” And the Jew Falaksinos answered and said unto him, “Wait until I take counsel with my teacher.”  And the Jew departed and he told his teacher how the man was a Christian.  And his teacher said unto him, “If he hath denied Christ his Messiah, take him and circumcise him.”  And the Jew returned, and told the Christian what his teacher had said to him, and the wretched man accepted this condition, and the Jew took him a carried him to their synagogue.  And the chief of the Jews questioned that wretched Christian before all the Jews, and he said unto him, “Is it true that thou wishest to deny thy Messiah, and become a Jew?”  And the Christian said unto him, “Yea”; and that debased and contemptible man denied our Lord Jesus Christ, our God, before the Jews.  Thus to poverty in money he added poverty in Faith.  And the chief of the Jews commanded them to make for him a cross of wood, and they made one for him as the chief of the Jews commanded, and they gave him a reed, on the top of which was a sponge full of vinegar, and a spear.  And he said unto the Christian, “Spit upon this cross.”  And he offered to him the vinegar and said, “Pierce [the cross] with this spear, [saying,] ‘I have pierced Thee, O Christ.’”  And that debased man took the cross and the spear from them and did as he commanded him.  And when he pierced the honorable cross with his cursed hand, much blood and water flowed forth, and ran down on the ground, and it continued to flow for a long time.  And straightway that apostate fell down and died, and dried up like a stone.  And great fear fell upon all those Jews, and they cried out, saying, “One is the Lord God of the Christians, and we believe on Him.”  And then the chief of the Jews took some of that blood, and made a sign therewith over the eyes of a girl who was blind, and she saw straightway.  And that Jew and all the men of his house believed, and very many of the [other] Jews believed.  And then one went and told Abba Theophilus, the Archbishop, what had happened, and he rose up, and took with him Abba Cyril, and many of the priests, and many of the people, and went to the synagogue of the Jews.  And the archbishop saw the cross with blood and water running down from it, and the saint blessed himself, and made the sign of the Cross with the blood on his forehead, and on the foreheads of all the people.  And he commanded, and they took up that cross with great honor and brought it with the singing of hymns to the church, and laid it therein; and they gathered up the blood from the ground and laid it in a vessel for “blessing,” and it healed the sick.  And after this Falaksinos and all the men of his house, and many other Jews, followed the archbishop, and they confessed before him our Lord Jesus Christ, Whom their fathers in times of old had crucified, and then he baptized them with Christian baptism in the Name of the Father, and the Son, and the Holy Ghost.  And he associated them with him in prayer, and he administered to them the Holy Mysteries, and they departed to their houses rejoicing, and praising, and thanking God.  Salutation to the conversion of the Jews.

And on this day also died Damiates, the martyr, who worked a miracles at the time when he, together with his servants, were stoned to death.  Salutation to the great miracle of making a blind man to see, and raising up to life a dead man on his bier.

And on this day also Saint Basilicus became a martyr.  To this saint our Lord Jesus Christ appeared when he was in prison, and He said unto him, “Depart, say farewell to thy kinsfolk, behold the time of thy martyrdom hath come.”  [The text is corrupt here.]  And he passed the night in saying farewell to his mother and to his kinsfolk.  And on the following day they brought Saint Basilicus, and tied him to two pillars, and beat him, and they made for him pegs of brass, and they fastened them to his feet like shoes so tightly that they pierced his feet, and the blood ran out on the ground; and all those who saw him wept for him.  And then they tied him to a dry tree, and men struggled with each other to touch the hem of his garment, when they saw the miracles, which he performed on many sick folk.  And then they took him to the city of Terlinos in a ship, and the soldiers said unto him, “Eat, that thou mayest not die.”  And the blessed Basilicus said unto them, “I am filled with heavenly food, and I do not choose [to eat] the food which perisheth.”  And on the following day they brought him to the governor, who said unto him, “Sacrifice to the gods.”  And Basilicus said unto him, “I offer offerings of praise to the Father, and the Son, and the Holy Spirit.”  And then the governor commanded the soldiers to bring him into the house of his idols, and the saint stood up and prayed to God and at length fire came down from heaven, and burnt up the idols.  And the governor being afraid took to flight, and went outside the city, and he was wroth and commanded the soldiers to hang him [on a tree].  And the saint prayed, and gave thanks to God, and they cut off his head, and we saw his soul with many angels who were taking it up [to heaven], and our Lord Jesus Christ called to him and said unto him, “Come, ascend, Basilicus, for I am not a liar, and I fulfill all that I say.”  And thus he finished his martyrdom.  Salutation to Basilicus.