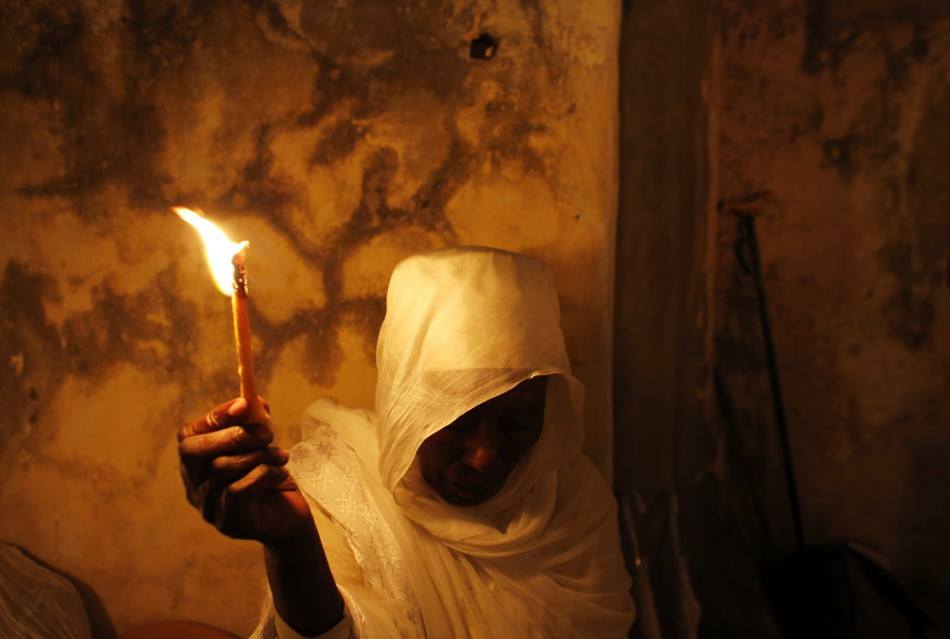 On this day Saint Christina, the daughter of Rubanos, became a martyr.  Her parents worshipped idols, and she herself offered incense to them according as her father had taught her.  And one day the fear of God entered her heart, and she turned herself towards the East, and she asked Him to teach her the path of the kingdom of heaven; and the Holy Spirit taught her the Faith of the Trinity.  And when her father came he said unto her, “What hath happened unto thee, O my daughter?”  And she said, “I am going to live the life of Christ.”  And her father was dismayed, and he said unto her, “What hath changed thy heart?”  And she said unto him, “I am instructed by the God of heaven”; and then her father departed, being very sad and sorrowful.  And Saint Christina rose up, and prayed to God, and straightway the angel of God came unto her, and he said unto her, “Be strong, for thou shalt be tortured by three governors.”  And then the angel of God sealed her with the seal of the Cross of our Lord Jesus Christ, and he gave her the Holy Mysteries.  And [she] went into the house of the idols, and broke the idols in pieces, and when her father saw her he commanded them to beat his daughter, until there went forth from her body honey instead of blood.  And they also laid her upon an iron bed, and they lighted a fire under her, but the fire did not harm her and it consumed ten thousand pagans [who were there].  And then her father commanded his servants to cast her adrift on the sea on a raft.  When she had prayed, our Lord Jesus Christ came with His angels, and baptized her, and Michael gave her, on a trident of fire, the Body and Blood of Christ, and cleansed her from the uncleanness of idols.  And that night Rubanos her father died.  And another governor, whose name was Dios, came, and he commanded the soldiers to bring Saint Christina, and to hang her on a tree, and to beat her, and to light a fire under her; and when the women saw her stripped naked they cursed the governor, and he cut off their heads with a sword.  And Christina they cast into the prison house.  And when the people saw her three thousand of them believed, and the wicked Dios died.  And there came a third governor, whose name was Julius, and he seized Saint Christina, and forced her to sacrifice to the gods, and when she cursed him he cast her into a vessel filled with boiling pitch, and lead, and wax, but this did not harm her.  And he also commanded the soldiers to cast her to the serpents, but they licked the dust at her feet, and bit the keeper of the serpents, who died.  And they also slit open and cut her breasts, and cut out her tongue, and she took the piece of her tongue, which was cut off, and cast it into the eyes of the governor, and blinded him.  And he was filled with wrath, and commanded the soldiers to cast her to the serpents; and one bit her in her heart, and one in her side, and thus she died by the Will of God; and innumerable miracles and wonders were made manifest at her grave.  Salutation to Christina, whom God baptized.  Salutation to the three thousand companions of Christina who were martyred.

Salutation to God Who helped the Apostles to be present at the burial of the Virgin.

And on this day also Saint Laurentius became a martyr in the days of Decius Caesar.  This saint was a man in whom great confidence was placed, and he was appointed an archdeacon, and he had charge of the revenues of the archbishop.  And when the emperor had killed the archbishop because of his Christian Faith, he commanded his soldiers to bring Saint Laurentius before him, and when they had brought him, they took him into the prison house.  And the saint found there, a blind man, and he said unto him, “Wilt thou believe in the Son of the Living God?  And wilt thou be baptized in His Name, so that thine eyes may be opened?”  And the blind man said unto him, “Yes, my lord.”  Then the saint prayed over some water in the Name of the Father, and the Son, and the Holy Spirit, and washed his eyes therewith, and his eyes were opened, and he cried out with a loud voice, saying, “Blessed be our Lord Jesus Christ Who hath given light to mine eyes, through the prayer of His servant Laurentius.”  And when the emperor heard this, he commanded his soldiers to bring Saint Laurentius before him, and he urged him to bow down to the idols; and when he refused to do so they broke his teeth with a stone, and tore off his garments, and laid him upon an iron bed, and kept a fire burning under him until his body melted.  And the saint continued to pray to his God until he delivered up his soul into the hand of God, and the angels came to meet it, saying, “Hallelujah,” and they brought it into the heavenly Jerusalem.  Salutation to Laurentius.