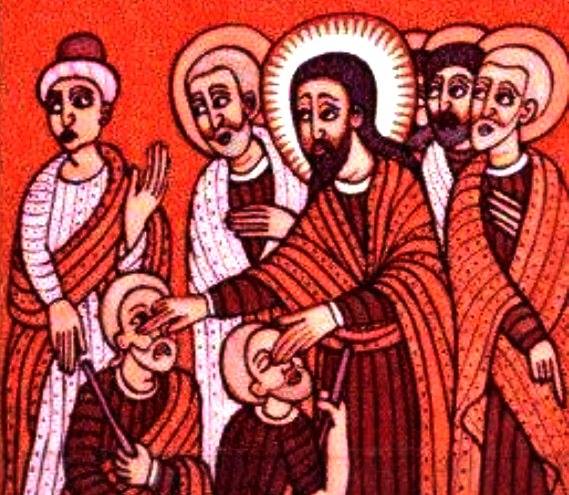 On this day took place the translation of the body of Saint Abba Macarius the Great to the desert of Scete.  After his death certain man came from the city of Selawir and stole the body of the saint, and built a church over it in their city; and it remained there until the Muslims ruled over the city, and then the men of Selawir removed it to another city.  And they built a church over him in their country, and he remain therein until the days of Abba Michael the Archbishop, that is to say for a period of four hundred and forty years.  When Abba Michael was appointed, he became steward (or, administrator) of the church of Saint Abba Macarius.  And when the archbishop went up to fast the Great Fast in the monastery of Abba Macarius, he cried out, saying, “I wish that our Lord Jesus Christ would help me, and that I shall find happy days, and that the body of Saint Abba Macarius shall be among us in this monastery.”  And after a few days Abba Michael, the steward of the church, and certain elder monks with him, departed on some business of the monastery, and a spiritual thought moved itself in their minds.  And they came to the place wherein was the body of Saint Abba Macarius that they might take him up, and the governor and all the men of the city gathered together with staves and swords, and prevented them from taking up the body of the saint; and the elder monks fell asleep being very sad and sorry in their hearts.  And that night Abba Macarius appeared to the governor and said unto him, “Why dost thou prevent me from departing to my sons?  Let me go with them to my own place, and prevent them not from carrying me away with them.”  And when the morning was come, the governor rose up, and he was in fear and trembling, and he called the elder monks, and delivered over to them the body of Abba Macarius, and they received him with great joy.  And they placed the body in a ship, and when they arrived in the city of Tarnut, there were many people with them from every city, who had come to bid the body of Abba Macarius farewell.  And the elder monks lodged there that night, and they prayed, and they celebrated the Offering, and received the Holy Mysteries, and then they took up Macarius and carried him to the desert.  And as they were going along, they came to a place in the desert, which was half way, and they wished to rest for a little because of [their] fatigue.  And Abba Michael said unto them, “As God Who holdeth the place of the Cherubim in His hand liveth, we will not rest until God revealeth unto us and shows unto us, [the place wherein] Saint Abba Macarius shall rest.”  And when the camel which was carrying the body of Abba Macarius came to that place, he knelt down, and would not rise up again, and he began to turn his head to this side and to that, and to lick the box wherein was the body of Saint Macarius.  And the elder monks knew that that was the place where the saint was to rest, and they marveled exceedingly, and glorified God greatly; and that place is well known to this day.  And when they came to the monastery, all the monks went out and received him with great honor, and with singing and with hymns, and with the Gospel, and with the Cross; and they had lighted lamps with them.  And they carried him on their heads, and they bore him along singing as they went, until they brought him into the church, with great honor; and God performed many miracles that day.  Salutation to the translation of the body of Abba Macarius.  Salutation to the children of Macarius.