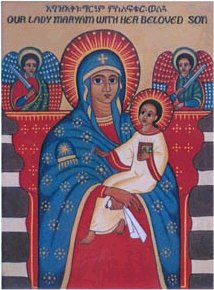 On this day is celebrated a festival commemorating our Lady Mary, the God-bearer, who became the salvation of the world, and who maketh intercession for us at all times, and for all those who celebrate her commemoration.  Salutation to thee, O Mary.

And on this day also died Saint Irene, which is being interpreted, “Peace.”  This saint was the daughter of King Lucianus, and he built for her a palace, and he placed in the walls eight windows, and round about it were twelve halls.  And he made for her a table of gold, and vessels of gold and silver, and he commanded a certain elder to teach her; and then he settled her in the palace, with three handmaidens to render her service, and closed the doors of the palace upon her.  And the elder teacher used to instruct her from outside; and her days at that time were seven years.  And one day whilst she was sitting at table, she saw a dove with an olive leaf in her mouth, and she laid it upon the table, and then there came an eagle with a crown, which he laid upon the table, and a raven came with a serpent, which he laid upon the table; and she was frightened at this sight, and she told her teacher about it.  And he answered and said unto her, “The dove is the teaching of the Law, and the olive leaf is Christian baptism; the eagle is the conqueror, and the crown is the works of the righteous; the raven is a king, and the serpent is tribulation.”  And her teacher said unto her, “Thou must fight the fight for the Name of Christ.”  And her father the king came to visit her, and he said unto her, “O my daughter, I wish to marry thee to one of the great nobles”; and she asked him, saying, “O my father, wait three days, until I can take counsel about it with my soul.”  And when her father had departed from her, she shaved off her hair, and stood up before the altar of the idols which were in the palace, and asked them to advise her about marriage; but they made no response whatsoever to her.  And the saint lifted up her eyes to heaven, and said, “O God of the Christians have mercy upon me according to Thy good pleasure.”  And the angel of God came to her and said unto her, “Behold, on the morrow there shall come to this city one of the disciples of Paul the apostle, and he shall baptize thee with Christian baptism”; and on the following day God sent unto her one of the disciples of the apostle, and he baptized her with Christian baptism.  And after three days her father and her mother came to her, according to their promise, and she said unto them, “I am a Christian.  I believe on my Lord Jesus Christ, the Son of the Living God; the Creator of heaven and earth.”  And her father was wroth with her, and he had her brought out into the midst of the city, and he commanded his servants to bind her with cords, and to throw her in the road, and to make horses trample upon her; and they did to her as he commanded, but no harm came to her.  And when her parents saw this, they believed on our Lord Jesus Christ and marveled exceedingly, and they forsook their kingdom, and departed to their abode and dwelt there.  And when the king, who lived near their country, heard the story of them, and what had happened to them, he came to that city, and said unto them, “Return to you kingdom,” but they did not wish to do so; now that king ruled the whole country.  And he tortured Saint Irene, and he set starving lions and serpents to attack her, but no evil whatsoever happened to her.  Then he sawed her with a saw, and he hung a heavy stone about her neck, but our Lord Jesus delivered her, and raised her up uninjured from every torture.  And her parents called the priest who had baptized her, and he baptized them with Christian baptism, and three hundred of their servants, and many of their kinsfolk and people of the city.  And then Numerianus the king heard the report of her, and he sent and had her brought to him, and he took her to the city of Kalani, where he tortured her severely, and shut her up in a brass bull, but God smashed the brass bull, and brought her out there from.  And Numerianus the king died, and King Sabor reigned in his stead.  And he heard the report of Saint Irene, and he had her brought to him, and then he speared her with the spear, which was in his hand, and she delivered up her soul.  And our Lord Jesus Christ raised her up from the dead.  When Sabor the king saw this miracle, he marveled exceedingly, and he bowed low before her and believed on our Lord Jesus Christ, and with him were many people of the inhabitants of the city.  Now the number of those who believed through her was three hundred and ten thousand . . .women.  And the father and mother of Saint Irene died in the palace.  And the Divine power bore the saint to the city of Ephesus, where she performed many signs and wonders.  For her confidence was in our Lord Jesus Christ [when she stood] before the kings of Persia, and the kings of Macedonia, and the kings of Kalaika and Constantinople.  And then she died in great honor, and they built a beautiful church for her, and laid her body therein, and many signs and wonders took place through her body, and a great healing of the sick.  Salutation to Irene.