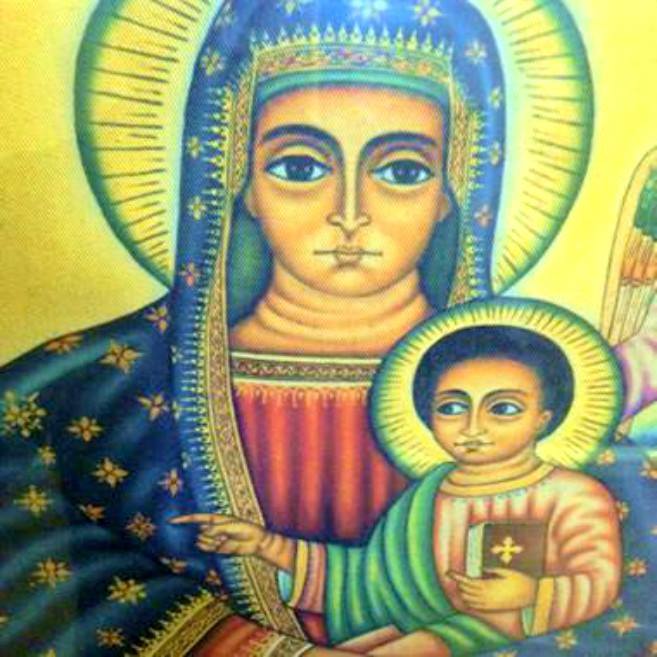 On this day is celebrated the festival of commemoration of the Birth of our Lord, and God and Redeemer, Jesus Christ, in the flesh, from our holy Lady, the Virgin Mary, for the salvation of the whole world.  Salutation to Thy Birth.

And on this day also Saint Athanasius the bishop became a martyr, and with him two servants, Garsomes and Theodotus.  Certain men reported to the king that Saint Athanasius had baptized the daughter of ‘Antonitos the general, and the king seized him, and Athanasius confessed before him that he was a Christian; and the king tortured him greatly, but not only would he not deny Christ, but he increased his Faith in Him.  Then the king commanded the soldiers to cut off his head with the sword, and he likewise tortured the two servants Garsimos and Theodotus severely, and he beat them and crucified them.  And then the soldiers cut off the heads of all three of them with the sword, and the saints received crowns of martyrdom in the kingdom of the heavens.  And the believers gave much money to the soldiers, and the guards who were keeping the bodies, and they took away the bodies of the saints and wrapped them up in rich cloths, and laid them in coffins, and many signs and miracles appeared through them.  Salutation to Athanasius.

And on this day also Saint Irenaeus, the Bishop of Sorem, became a martyr.  They seized this saint at the first hour of the night, and brought him into the governor’s house, and the governor said unto him, “Sacrifice to the gods.”  And Irenaeus said unto him, “I will not offer sacrifice, for I am a fearer of God and I am His servant.”  And the governor commanded the soldiers to drown him in the river, and when he had come to the ferry, he stripped off his apparel, and prayed to God to receive his soul, and to protect his people in Sorem, and to give peace to the churches.  And then he said, “I believe in Thee, O my Lord Jesus Christ, and I make supplication to Thee as I suffer,” and straightway they cast him into the river.  Salutation to Irenaeus.

And on this day also is commemorated the translation of the body of Abba John the Short to the desert of Scete; this took place after his death in Debra Kuelzem, which is the desert of Saint Abba Anthony.  And this happened in the days of Abba John, the forty-eighth Archbishop of the city of Alexandria, who went to the desert of Scete, and the holy monks said unto him, “We wish the body of Abba John the Short to be in the church of Abba Macarius, that we may bow down before it.”  And straightway the grace of God moved him, and he wrote a letter [and sent it] by the hands of a certain abbot, whose name was Cosmas, and with him was an elder of the country of Clysma.  And when they arrived they were unable [to do anything], for at that time his body was in the charge of Chalcedonian Melchites, who were dwelling in that place.  And the abbot, and those who were with him, learned and made certain where that place was, and they returned and found certain men who were Orthodox believers dwelling in that city, and they told them the matter concerning which they had come.  And after a few days a governor, who was one of the elders of the city, was appointed over Clysma, and he was a friend of Abba Michael, Bishop of the city of Clysma.  And the archbishop wrote a letter to the bishop about the body of Saint Abba John, and he commanded him to make plans, and to help his messengers, the elder monks, so that they might be able to remove the body of the saint from the hands of the heretics.  And the bishop rejoiced with a great joy, and told the scribe of the governor, his friend, and the scribe told the governor about the letter of the elder monks.  And the scribe said, “How can we find an excuse for introducing the monks into the cave of the place?”  And the governor said, “Let the monks put on over their own apparel Arab garments, and let them come with us to that place”; and they did so.  And the governor departed having with him many people, and horsemen, and Arabs, and the elder monks from the desert of Scete, and they came to Clysma.  And the governor spoke unto the Malachite bishop who dwelt in that place, [saying,] “Send out all our men from the church, and let not one of them be left therein, for I wish to go into the church, and to remain there the whole night”; and the heretic did as the governor commanded.  And the elder monks made ready their beasts outside the city, and they came by night and took away the body of Abba John, and they departed and came to Mesr (Cairo), and hence they traveled to the desert of Scete.  And the monks of the monastery of Abba Macarius went out and met them with crosses, and Gospels, and instruments of music, and incense, and songs, and hymns.  And they brought Abba John to Saint Abba Macarius, and all the monks were blessed by him; and they sprinkled many perfumes over him, and they celebrated the Offering.  And at the time when the Gospel was being read a miracle which was most marvelous was made manifest; the whole of the church was lighted up with heavenly light, and was filled with the odor of very sweet perfume, the like of which never was.  And there was great joy.  And the saint remained in the monastery of Abba Macarius for six days, and after this they took him and carried him to the church, and his sons the monks received him as the Hebrews received our Redeemer, and they cried out before him, saying, “Blessed is he who cometh in the Name of God.”  And they laid him in his place, and signs and wonders took place through him.  And after the death of this Saint Abba John, Abba Mark the archbishop, who lived after him, went up to the desert of Scete, and he entered the church of Saint Abba John, and bowed low before him; and with him were bishops, and many of the elders of the city of Alexandria, and of all the country of Egypt. And he uncovered the body of the saint and found it moist and hairy, and he was blessed by it and wept with a bitter weeping.  And when Abba Mark uncovered John’s body, there was a loud clap of thunder in the church, and all the men fell in a state of terror and fear.  And the archbishop replaced the sackcloth covering over him, and then wrapped him in fine linen.  And they carried away the saint, singing praises and a spiritual song, saying, “O thou who wast a swift cloud, and didst bear rain, thou didst go to the country of Babylon, to the Three Children, and didst return to the city of Alexandria in the might of the Holy Spirit, which was with thee.  And thou didst also go to Clysma, and didst overthrow the houses of idols, and didst preach the True Faith, and didst heal the sick, and didst cast out devils, and didst return to thine inheritance; thou art a habitation of blessing, and a traveler to the kingdom of heaven.”  And the translation of the body of Abba John the Short took place in the five hundred and twentieth year of the Holy Martyrs (A.D. 804).  Salutation to the translation of thy body, O John the Short.