Quick Facts | Ancient Jewish historian on the Queen of Sheba 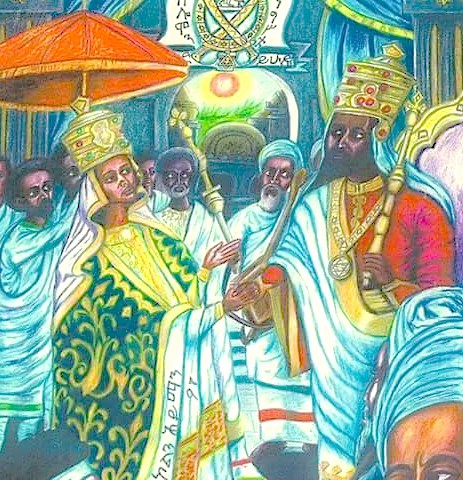 The Works of Flavius Josephus, Antiquities of the Jews

There was then a woman queen of Egypt and Ethiopia; she was inquisitive into philosophy, and one that on other accounts also was to be admired. When this queen heard of the virtue and prudence of Solomon, she had a great mind to see him; and the reports that went every day abroad induced her to come to him, she being desirous to be satisfied by her own experience, and not by a bare hearing; (for reports thus heard are likely enough to comply with a false opinion, while they wholly depend on the credit of the relators;) so she resolved to come to him, and that especially in order to have a trial of his wisdom, while she proposed questions of very great difficulty, and entreated that he would solve their hidden meaning.

Accordingly she came to Jerusalem with great splendor and rich furniture; for she brought with her camels laden with gold, with several sorts of sweet spices, and with precious stones. Now, upon the king’s kind reception of her, he both showed a great desire to please her, and easily comprehending in his mind the meaning of the curious questions she propounded to him, he resolved them sooner than any body could have expected. So she was amazed at the wisdom of Solomon, and discovered that it was more excellent upon trial than what she had heard by report beforehand; and especially she was surprised at the fineness and largeness of his royal palace, and not less so at the good order of the apartments, for she observed that the king had therein shown great wisdom; but she was beyond measure astonished at the house which was called the Forest of Lebanon, as also at the magnificence of his daily table, and the circumstances of its preparation and ministration, with the apparel of his servants that waited, and the skillful and decent management of their attendance: nor was she less affected with those daily sacrifices which were offered to God, and the careful management which the priests and Levites used about them.

When she saw this done every day, she was in the greatest admiration imaginable, insomuch that she was not able to contain the surprise she was in, but openly confessed how wonderfully she was affected; for she proceeded to discourse with the king, and thereby owned that she was overcome with admiration at the things before related; and said, “All things indeed, O king, that came to our knowledge by report, came with uncertainty as to our belief of them; but as to those good things that to thee appertain, both such as thou thyself possessest, I mean wisdom and prudence, and the happiness thou hast from thy kingdom, certainly the same that came to us was no falsity; it was not only a true report, but it related thy happiness after a much lower manner than I now see it to be before my eyes. For as for the report, it only attempted to persuade our hearing, but did not so make known the dignity of the things themselves as does the sight of them, and being present among them. I indeed, who did not believe what was reported, by reason of the multitude and grandeur of the things I inquired about, do see them to be much more numerous than they were reported to be. Accordingly I esteem the Hebrew people, as well as thy servants and friends, to be happy, who enjoy thy presence and hear thy wisdom every day continually. One would therefore bless God, who hath so loved this country, and those that inhabit therein, as to make thee king over them.”

Now when the queen had thus demonstrated in words how deeply the king had affected her, her disposition was known by certain presents, for she gave him twenty talents of gold, and an immense quantity of spices and precious stones. (They say also that we possess the root of that balsam which our country still bears by this woman’s gift.) Solomon also repaid her with many good things, and principally by bestowing upon her what she chose of her own inclination, for there was nothing that she desired which he denied her; and as he was very generous and liberal in his own temper, so did he show the greatness of his soul in bestowing on her what she herself desired of him. So when this queen of Ethiopia had obtained what we have already given an account of, and had again communicated to the king what she brought with her, she returned to her own kingdom. …”