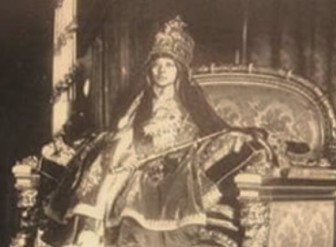 Zewditu was named Empress, Queen of Kings, chosen by God, and lion of Judah, the first woman on the imperial throne to sit in her own right, as the Queen of Sheba. Her cousin Dejazmatch Tefferi Makonnen was proclaimed heir to the throne with the title of Ras at the same time. Empress Zewditu was the daughter of Emperor Menelik II by Woizero Abechi, a woman of mid-level nobility, shortly after his captivity after Menelik back to Shewa zone of Oromia born on Magdalla. Woizero Abechi Zewditu died while was still a very young child, so Zewditu was raised by her father, in the care of nannies, and was closer to him than any other person to save his wife Empress Taitu. Zewditu also had a half-sister, Woizero Shewaregga Menelik, the mother of Lijen Eyasu, and a half-brother, Prince Asfaw Wossen Menelik, who died in 1888, while still a child. She was often referred to by her close family members of the nickname of “Mamite” which translates into “Baby”. Unlike most of the rest of the Shewan aristocracy, Zewditu had very good relations with Empress Taitu. Although was abrupt and strict mistress of Taitu, the household Menelik’s, Zewditu had deep affection for her stepmother. Affection, although often dispairing of Taitu back Zewditu’s her behavior. She believed that Zewditu was all too familiar with the palace servants to say: “it imposible to separate Mamite of servants”. She often scolded her for not maintaining the dignity of a daughter of the House of Solomon. Zewditu had a reputation of kindness and completely lacked the haughty and rule-mongering attitude of her stepmother and other female family members. Treated everyone with the same sweet Zewditu kindness or they were royalty or simple servants.