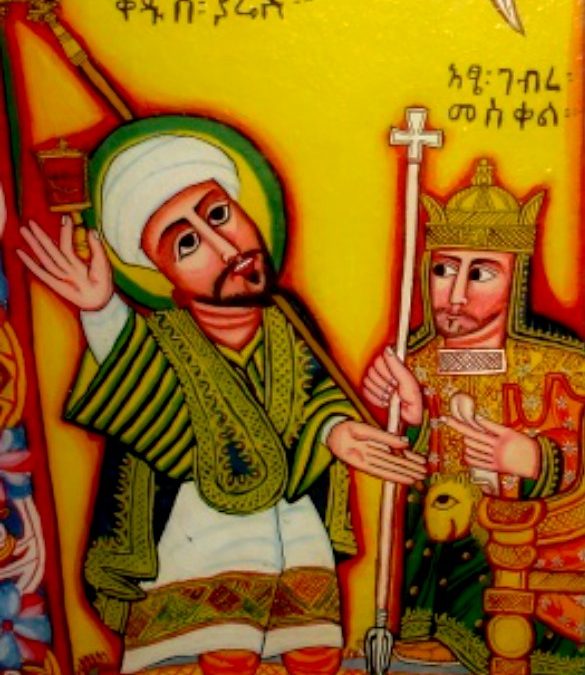 The Deggua or hymnary is attributed to Saint Yared, a scholar who lived in Aksum in the 6th century. During the course of the centuries Hymns have been added by various composers. He was caught up into paradise and there received the precepts that were to guide him. These precepts are contained in the Mezegeba Deggua (Treasury of Plainsongs). It is he who invented the three modes of chanting used in the church and known respectively as geeze, ezil and ararai.

The Antiphony of the church is known as the Mawaset (Answers). It consists of anthems for special festivals through out the year. The “Meraf” also has hymns and chants for the festivals of the year.

Certain types of hymns or poems have become particularly popular, and the Qene is one of them. There were short hymns often extemporized, which were sung after certain verses of the Psalter. Another well-known type was the “Salam.” The “Malkea” was a special favourite. In this type the poem consists of numerous stanzas. In each stanza one member of the saint’s body is greeted, e.g. the hair, the head, face, eyebrows, eyes, ears, cheeks, nose etc. chanting by priests is accompanied by the beat of drums and the silvery tones of sistrum-cymbals. The gold-embroidered star-ornaments on the velvet priestly robes and brilliant coloured ceremonial umbrellas gleam as the priests sway to the measured rhythm of David’s ancient priest dance.

The instruments used in the music include the tsenatsil, a type of sistrum, the kebero, a large drum, and a hand-bell. The three modes mentioned are used as follows: Geeze is used for feriae (ordinary days); Ezel is used on fast days and during Lent; and Ararai is used for principal feasts.

In summary antiphonal chanting or singing, called “Deggua”, forms the basic body of the music; in addition, zemaria is used when poetry is sung as in the psalms of David, Mawaset corresponds to some extent with the congregational responses used in western churches and Meraf is used without the drums for ordinary daily services. These four types of singing may employ any of three types of zema (modes of tones). The music is Middle Eastern in style and Arabic in derivation; it is restrained, strophic, ametric and sung at very slow tempos and organized antiphonal at a leisurely pace.

A notable feature of this music is antiphony, sometimes between two voices or between a solo voice and a chorus. The chorus sings in unison. On some occasions there is true polyphony within the chorus and between the chorus and a leader.

Ethiopian church music is most expressive in its praise of the creator and thus a worthy means for the soul to elevate itself to God.