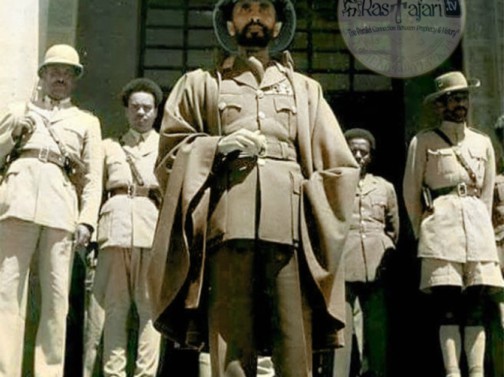 Christianity entered Ethiopia in the 4th century, and the Bible was translated into Geez (Ethiopic) thereafter. This Bible was revised in the 14th Century. The first complete Amharic Bible was produced in 1840, and went thru several revisions thereafter. The version of the Bible presented here was the fulfillment of the expressed desire of Emperor Haile Selassie, and was first published in 1962.

In 1962, a new Amharic translation from Ge’ez was printed, again with the patronage of the Emperor. The preface by Emperor Haile Selassie I is dated “1955” (E.C.), and the 31st year of his reign (i.e. AD 1962 in the Gregorian Calendar), and states that it was translated by the Bible Committee he convened between AD 1947 and 1952, “realizing that there ought to be a revision from the original Hebrew and Greek of the existing translation of the Bible”. It included the 66 books of the protocanon (i.e. those held canonical in common with Protestant and Catholic Christians), as the 5 narrow canon deuterocanonical books were published separately. The five narrow canon Ethiopian deuterocanonical books comprise 1 Enoch (Henok; different from the standard editions of Ge’ez manuscripts A~Q by foreign academics), Jubilees (Ge’ez: Mets’hafe Kufale) and I, II, and III Meqabyan (substantially different from I, II, and III Maccabees).

The 81 book Ethiopian Orthodox Tewahedo Church Bible, including the deuterocanonicals, 46 books of the Old Testament and 35 books of the New Testament, was published in 1986. This version incorporates a few minor changes or corrections to the 1962 Amharic text of the New Testament, but the text of the Old Testament and Deuterocanon are identical to those previously published under Haile Selassie The 1st.