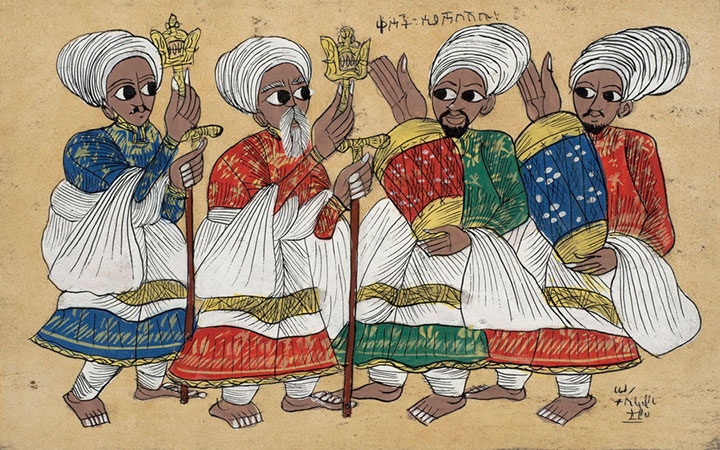 On two days during the week during a period of fasting, the abstinence from food is somewhat mitigated, and those days are Sunday and Saturday. The mitigation consists only in the custom of taking a light breakfast already well before noon on those days. Also in that the Ethiopian Church follows the custom of the other oriental Churches. Special for the Ethiopian christians is the custom of celebrating the Eucharist – always on Sundays, of course, and on Saturdays, if for some reason the Eucharist is celebrated on that particular Saturday – in the morning. On all other days of fasting the Eucharist is celebrated only at noon, and the first meal of the day is taken after the celebration. Another feature which is special to the Ethiopian Church is that some of its members celebrate “the two Sabbaths”, i.e. both the Old Testament Sabbath on Saturday, and what the Ethiopians call Sänbätä Krestiyan, the Sabbath of the christians, i.e. Sunday. When exactly that custom came up is still uncertain. Getatchew Haile has expressed the opinion that the question whether or not the Old Testament Sabbath should be observed “was a very serious problem, probably throughout the history of the local church, but definitely during the time from the fourteenth to the seventeenth century” . The latter is a well-known fact: the 14th-15th- century in particular was a period of strong religious fermentation in Ethiopia, and several sects came up with opinions which were deviating from those of the official national Church. One of these, which however did not entirely leave the Church and was reconciled with the rest of the orthodox believers already in the 15th century, were the followers of a monastic leader from the north of the country, Abba Ewostatewos. They insisted on observing the two Sabbaths, and since the See of Alexandria would only allow the observance of Sunday as the weekly day of feast and rest, Abba Ewostatewos was expelled from Ethiopia and died in exile in Armenia in 1352. His movement, however, is still persisting today, although its teachings concerning the “49 hour Sabbath” is not binding for all Ethiopian Orthodox Christians.