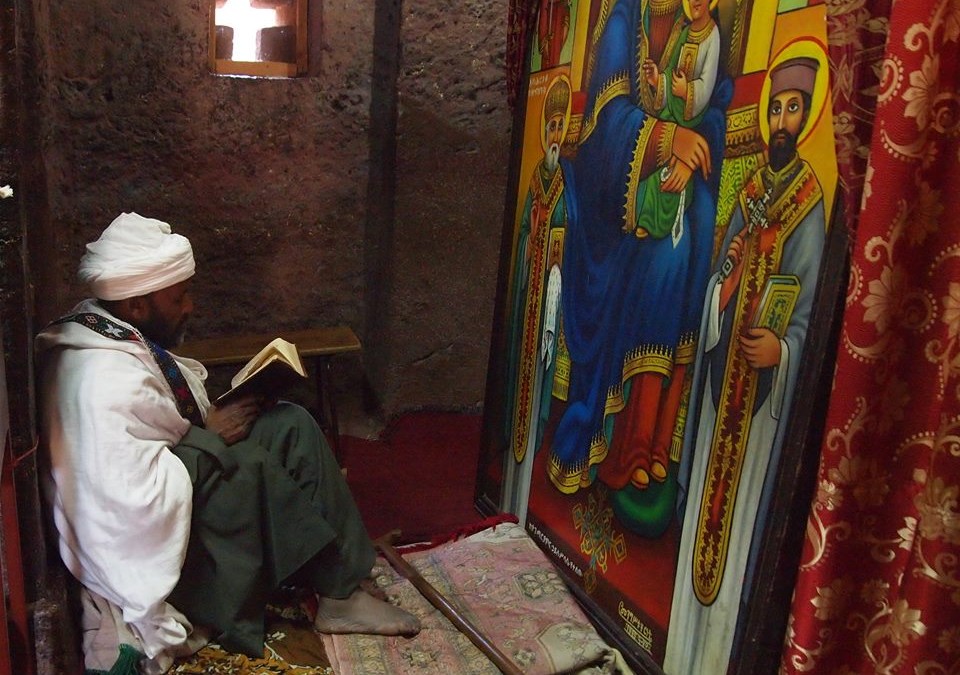 On this day took place the consecration of the church of Laventius, in the country of Syria, where many signs and wonders appeared.  This holy man became a martyr in the city of Tarablos, on the twenty-second day of the month of Hamle.  And a certain Christian woman, the wife of a very great nobleman, came, and having given much money to the soldiers to be allowed to take his body she carried it away, and wrapped it in cloth of gold, which belonged to her husband, and then she laid it in a coffer which was in her house, and she hung a lighted lamp before it, and painted a picture of him.  Now her husband was a judge, and Diocletian was wroth with him and shut him up in prison in the city of Antioch.  And the woman having made ready for burial the body of the saint, entreated it honorably, and wrapped it in cloth of gold.  And the martyr of our Lord Jesus Christ, Saint Laventius, did not wish her to remain unrewarded for the gifts which she had bestowed upon him, and he rewarded her well in this world, for he delivered her husband from the prison house; and assuredly he would also do good to her in the world which is to come, and make intercession for her before our Lord Jesus Christ.  And that night the saint appeared unto the judge, her husband, in the prison house, and a great light rose upon him, until the whole house was lighted up.  Then he saw Saint Laventius in the form of a horseman, and light was shining from him, and as he stood by him in the prison house, arrayed in cloth of gold, the judge knew that this cloth of gold was his own apparel.  And Saint Laventius, the horseman, said unto the judge, “Grieve not, neither be sorrowful, for thou shalt be delivered to-morrow, and thou shalt eat with the emperor at his table, and thou shalt go to thy house.”  And the judge was amazed at the many things which he saw that horseman do, and at the light which rose over him, and at his coming in to him in the prison house, [the doors] being shut, and at [the sight of] his own cloth of gold which he had left in his house.  And Saint Laventius hid himself (i.e. disappeared), and went to the emperor that night.  And he struck the emperor with his foot twice and thrice.  And the Emperor Diocletian woke up, and when he saw Saint Laventius, he was afraid and was greatly terrified.  And Saint Laventius said unto him, “When the morning hath come, bring out so and so, the judge, from the prison house, and do him honor, and let him go to his house, lest thou die an evil death and be destroyed.”  And the emperor trembled before him, and answered and said unto him, “Yea, my lord, everything which thou commandest me [to do] I will do.”  And when it was morning, the emperor sent and brought the judge out of the prison house, and he paid him great honor, and arrayed him in splendid apparel, and he made him to sit at meat at his own table, and he told him how the horseman had appeared unto him.   And the judge was silent, and marveled exceedingly; now the king saw that Saint Laventius was an angel.  And the judge answered, and said unto him, “I know nothing whatsoever about all which thou sayest, and I do not know who it was that appeared unto thee”; and the emperor did not dare to speak to him one word of abuse, but he sent him to his own city, with great honor, because of his fear of him that had appeared unto him.  And as the judge was journeying along the road, the angel of God in the form of Saint Laventius appeared unto him, and held converse with him, and he comforted him until he arrived in his own city of Tarablos; then he hid himself (i.e. disappeared) from him straightway.  And the judge went into his house, and he embraced the men of his house, and told them how that horseman had appeared unto him in the prison house, arrayed in cloth of gold, and how he had promised him that he would deliver him from the prison house, and how he had brought him out of his bondage in the morning, and how the horseman had appeared unto him on the road wearing the cloth of gold.  And his wife, who knew that the horseman was Laventius, answered, and said unto him, “Yea.”  Then she took him into the shrine, to the picture of Saint Laventius, and as soon as he saw it he said, “Verily this is he who appeared unto me.”  Then she opened the coffer wherein was the body of Saint Laventius, and he saw him wearing his cloth of gold; and he opened the wrapping of his face, and he knew that it was he who had appeared unto him and delivered him.  And the judge asked his wife about the saint, and he said unto her, “Who is he?”  And she told him the history of the saint.  And the judge praised his wife for what she had done and he glorified God the Most High and Glorious, Who worketh miracles for His saints.  Then he commanded his wife to burn incense, and to keep a [lighted] lamp before him, and she continued to do this until God destroyed Diocletian, the infidel.  And they built a church for the saint, and they translated his body thereto, and they laid him in it, and they consecrated the church as it were this day; and many signs and miracles took place therein through his body.  Salutation to Laventius.

And on this day also is commemorated Thomas, the martyr, Archbishop of the city of Alexandria.

And on this day also are commemorated Saint Cosmas, the martyr, of the city of Taha, in Upper Egypt, and his companions.  Salutation to Cosmas and homage to his companions.

Salutation to Bifamon, who fought a strenuous spiritual fight.

And on this day also was consecrated the first church which was built in the name of Saint Bifamon, the martyr and fighter.