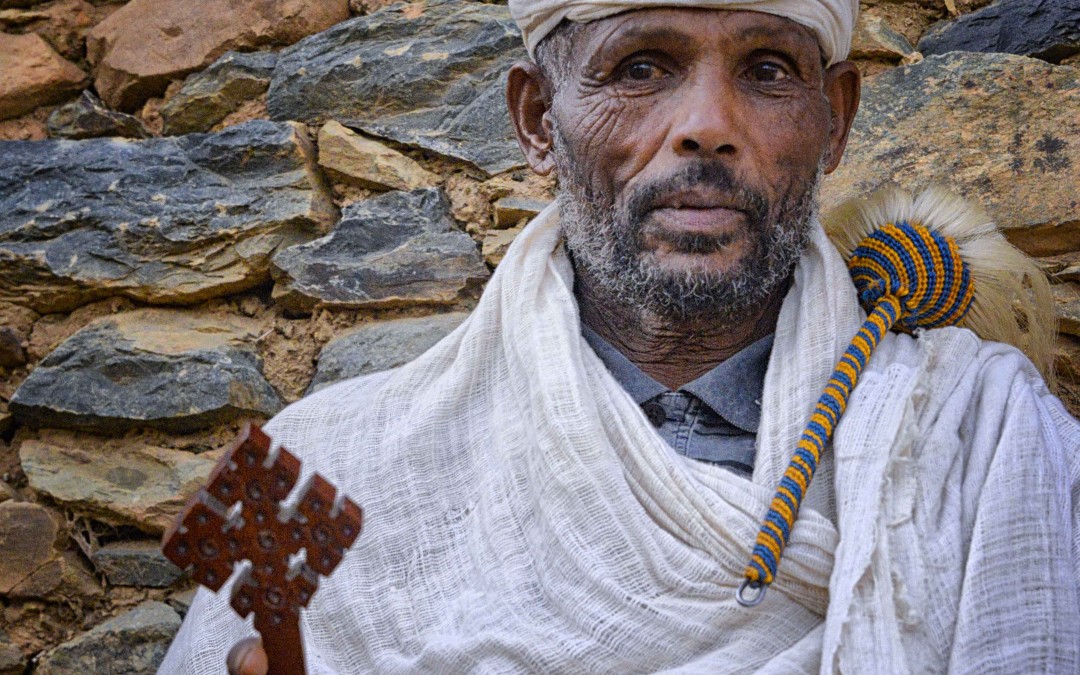 On this day died the holy, pure and devoted fighter Martha.  This holy woman was a native of the city of Mesr (Cairo), and her parents were very rich.  She loved fornication and unchastity from her youth, and the sons of the elders and honorable men of the city used to visit her secretly; and when her works became known, she became bolder in her deeds of impurity, and committed fornication openly.  And when the festival of the birth of our Lord Jesus Christ came, she went to the church and wished to go inside, but the verger of the church said unto her, “It is not meet for thee to go into the holy church, for thy deeds are impure.”  And as she continued to insist that he should let her go into the church, and he prevented her, a fierce fight broke out between them.  When the bishop heard the commotion, he rose up, and came to the door of the church to see what had happened.  When he saw Martha he said unto her, “Dost thou not know that the house of God is a pure and holy house?  Thou art unclean, and thou art not fit to enter the house of God.”  And she said unto him, “Henceforward I will not go back to my sin, but if thou wilt receive me I will repent and become a nun.”  And the bishop said unto her, “I will not believe thee unless thou wilt bring here thy wealth, and all thy goods, and all thy possessions, so that we may burn them with fire.”  And she went to her house quickly, and she took all her money, and jewels, which were of great price, and she brought them to the bishop, and cast them down before him; and the bishop commanded his servants to burn all the possessions which she had brought with fire, and they burned them before her.  Then the bishop shaved off the hair of her head, and taking off her garments he dressed her in sackcloth of hair, and he sent her to a house for virgins, where she fought a great spiritual fight there.  And she frequently rebuked herself, saying, “If they will not let thee alone in this place, which is built of stones and clay, how wilt thou live in that habitation of the beings of light?  What shall I do?  Who will be surety for me?  Who will intercede for me?”  And she said in her prayer, “My Lord, even though it was possible for me to bear disgrace at the hands of the verger of the church, I entreat Thee, O God, my Lord, do not put me to shame before Thine angels, and Thy saints.”  And this holy woman continued the spiritual fight for five and twenty years, and at length she conquered Satan, the Adversary; and she did not go out of the door of the nunnery during the whole of this period.  And at length she died in peace.  Salutation to Martha.

And on this day also Karyon (Gorion), and Hilarion, the bishop, became martyrs.  This saint rebuked the Emperor Julian, the infidel, for worshipping idols.  And Julian, the infidel, answered and said unto him, “Thou tellest me that I am an infidel because I do not worship Him Whom the Jews crucified; but through much torture, and tribulation, I shall see thee forsaking the worship of Him.”  Then the emperor handed him over to one of his officers, and commanded him to torture Hilarion very severely all day long, and to show him no mercy.  And the officer took him, and tortured him with every kind of torture, and this he continued to do for a full year; and during the whole of that year he never ceased to torture him, even for a single day.  He threw him into the fire, but Hilarion stood up in it, and glorified God, and ascribed holiness to Him.  Through this miracle very many men believed on our Lord Jesus Christ, and became martyrs; and after this the officer took him out of the fire, and he was like one who cometh forth from a garden.  And when the officer was tired of torturing him, and not knowing what else he could do to him, he commanded the soldiers to cut off his holy head with the sword; and they did so, and he received the crown of martyrdom in the kingdom of heaven.  Salutation to Hilarion.