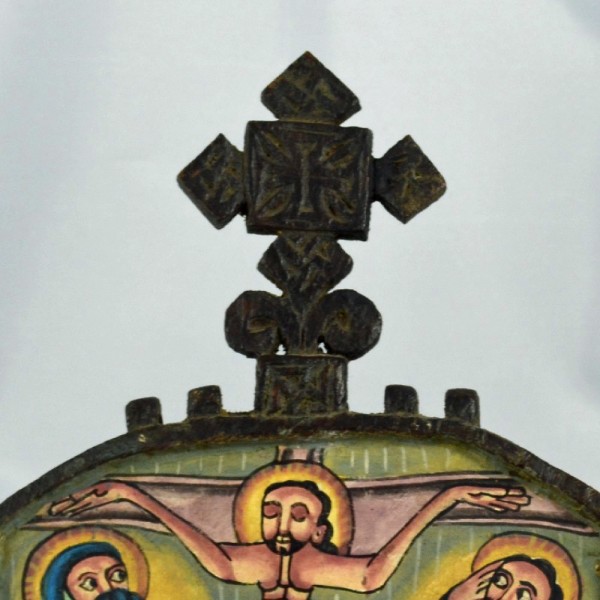 On this day Saint Sanusi, from the city of Balkim, became a martyr.  When this saint was a young man he used to tend his father’s sheep, and he used to give his food to the shepherds each day, and fast himself until the evening, now his parents did not know what he did, and he used to visit the sick, and those who were in prison.  One day the angel of God appeared unto Sanusi and said unto him, “Rise up, and go to the governor, and confess thy God, so that thou mayest receive the crown of martyrdom.”  When he woke from his sleep, he told his mother how the angel of God had appeared unto him, and she was sorry and wept; and she was unable to hold him back.  And he heard about a certain holy woman of the city of Sabra, whose name was Maria, and who used to receive the poor and pilgrims into her house, and show them many acts of charity; to her this saint went, and he made an agreement with her that they should receive the crown of martyrdom.  And they went together to the governor whose name was ‘Arsanios, and they found him in a ship which was lying by the side of the river bank at Mesr (Cairo), and they cried out boldly, “We are Christians.”  And the governor commanded the soldiers to torture them with every kind of torture, and Saint Maria delivered up her soul under the torture and received the crown of martyrdom; but by the power of our Lord Jesus Christ which dwelt on him Saint Sanusi endured the torture.  When the governor was tired of torturing him he sent him, with many [other] martyrs, to the governor of the city of Antinoe, who tortured him very severely.  And he commanded the soldiers to bore holes in the soles of his feet, [and to tie a rope to them,] and to drag him round about the city; and although they did as he commanded, no injury came to Hilarion (sic). After this he brought a sorcerer from ‘Akmim, and he concocted a magical drink for him wherein poison was mixed, and commanded Hilarion (sic) to drink it.  And the saint having made over it the sign of the Cross drank it, and no harm came to him.  When the governor was tired of torturing him, he commanded the soldiers to cut off his head with the sword, and they cut off his head with the sword; and he received the crown of martyrdom in the kingdom of heaven.  And the sorcerer also believed on the Lord Jesus Christ, and received the crown of martyrdom in the kingdom of heaven.  Salutation to Sanusi, and to Maria, and to the Sorcerer.

And on this day also John, of the city of ‘Arakli, became a martyr.  The father of this saint was Zacharias, governor of the city of ‘Antarsen and ‘Albia, and the name of his mother was “Elisabeth.”  And when they were blessed with this boy, on the fifth day of this month, they called his name “John”; for his father and his mother both wished him to have the name of John, who baptized the Lord.  And they brought him up in the admonition and fear of God, and they taught him the Books of the Church, and the knowledge of numbers, and all kinds of philosophy.  His mother watched over him carefully all his days so that he should not step aside from the path of God, and his father also admonished him.  After this his father died, when the young man was twenty years old, and he became judge in his father’s place, and all the countries of Pontus, and Harakli, and other cities continued to be under his authority.  Whilst matters were thus, Satan appeared unto him in the form of an angel, and said unto him, “Thus saith God:  Go thou to the city of Antioch and marry the daughter of Numerianus the king, so that thou thyself mayest reign, and may sit with him upon the same throne.”  And the saint pondered and said, “Is this an angel [of God] or an angel of Satan?  As, however, I heard the Name of God from his mouth I will go to the city of Antioch”; and then he went and met Diocletian, who loved him and paid him honor from the day he saw him.  And on the following day, when they were sitting at meat together, the wicked Diocletian ordered his servants to bring in Apollo, and they brought him in before him.  When the saint saw him, he made a motion of contempt at the idol, and he cursed the emperor and hated him for this.  When Diocletian saw what the saint had done, he was filled with very great wrath, and he bound John in prison.  And whilst John was in prison, our Lord appeared unto him in a chariot of light; now there were angels with Him, and He took him, and kissed him mouth to mouth, and promised him many things.  On the following day Diocletian sent and brought him out of prison, and said unto him, “Come and worship Apollo and Artemis”; and the saint refused to do so, saying, “How can I worship the work of the hand?”  And the emperor spoke many persuasive words unto him, and he wished to be rid of him.  Then he sent him to the country of Egypt, giving him power to levy taxes.  And Diocletian sent a letter concerning him to Soryakos, the governor of Egypt, saying, “I have given power to John, the Haraklian, over all the taxes from Jerusalem to Ethiopia, and let the people pull down the temples and destroy them utterly.”  And the saint accepted this pretence and pulled down the temples, and left them in ruins.  One day after this Soryakos, the governor, sat on the tribune in order to command the cutting off of the heads of the martyrs.  And straightway there came men from Upper Egypt called Dioscoros, and Bifamon, and Harganus, and Kiros, and Julius, and Alexander, and Joseph, and Isaac, and Stephen, and they cried out boldly, “We are Christians”; and straightway the governor was wroth, and he tortured them without sparing.  And when Saint John saw this, he abandoned the office of his judgeship, and cried out boldly, “I am a Christian.”  And the governor was wroth, and commanded the soldiers to bind him with iron fetters, and then he sent him to Arianus, the governor of Ensna, who questioned him about all that had happened.  When he heard John’s words, he was wroth and commanded the soldiers to hang him on the henbaz, and to break him on the iron wheel.  Then he commanded them to take him off the henbaz, and to beat him on his belly and head until his flesh melted, and the earth was soaked with his blood; and they cast him into prison.  A few days after this he commanded them to hack his body in pieces with hatchets, and then he commanded them to bring a piece of sackcloth made of hair, and to drag it over his wounds; and they also sprinkled hot ashes and coals of fire under his back.  And he also commanded them to bring pegs of iron, which had been heated, in the fire, and to lay them on his face, and to drive them through his ears; and when they had done this they cast him into prison.  That night the angel of God appeared unto him and gave him peace.  And on the following day the governor had him brought out and he tortured him with red-hot bars of iron.  After all this, they bound his hands and his feet with cords, and they tied him on to the back of a horse with his face turned downward towards the earth.  Then the executioner came and cut off his hands, and feet, and head, with the sword; and he treated the two other men who were with him in like manner.  Thus the saint finished his martyrdom and his good fight.  Salutation to John, and to those who were martyred with him.  Salutation to Bifamon, and to his brethren, and to his mother.

And on this day also became martyrs ‘Akronius, and Dimunasia, his sister, and ‘Amoni and Mina, the Egyptians and soldiers of the Emperor Diocletian.  When the emperor cast these saints into a pit of fire along with Abba ‘Ebsoy, the angel Gabriel came and brought them forth from the flames.  And when the saints came before the emperor, they cursed him and said unto him, “Why dost thou delay day after day, and dost not bring to an end our matter?”  When the emperor heard this he was wroth, and he commanded the soldiers to cut off their heads with a sharp sword, and to burn their bodies in the fire; [and they did so,] and thus the saints finished their martyrdom, and kept the festival with the righteous in the kingdom of heaven.  Salutation to ‘Akronius, and to Dimunasia, his sister, and to ‘Amoni, and to Mina.

And on this day also became [martyrs] Bifamon, and ‘Azenhas.