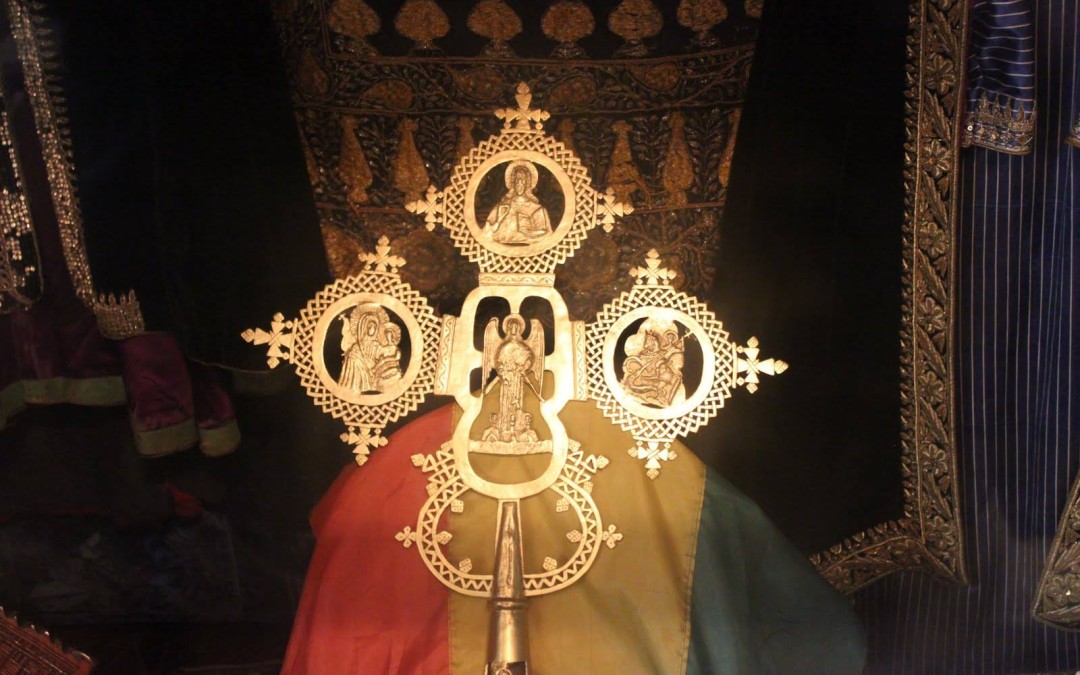 On this day became a martyr the holy and honorable victor, Abba ‘Abaskiron from the city of Kalen.  This saint was one of the soldiers of Arianus, the governor of Antinoe.  And when the Edict of the wicked Emperor Diocletian concerning the worship of idols arrived, this saint rose up among the people, and cursed the emperor and his gods, and no man dared to punish him because he was a soldier, but they shut him up in the governor’s house.  And when the governor of the city of Antinoe went to the city of Asyut, the emperor sent this saint and five other soldiers to him; and the names of these soldiers were:  Walfius, and Herminius, and Arkias, and Peter, and Carnius.  These men made a covenant with Abba ‘Abaskiron to shed their blood for the sake of the Name of our Lord Jesus Christ.  And having stood up before the governor of Antinoe, he commanded the soldiers to cut off the belts of these men, and then to torture them; and the soldiers did as he commanded.  Of these five soldiers some of them had their heads cut off, and some of them were crucified, and they were crowned and received the crown of martyrdom.  And the governor commanded the soldiers to beat Saint ‘Abaskiron severely, and after this to flay his head down to his neck; and they did so.  Then he tied him to the tail of a horse, and dragged him about the city; then he set him in a cauldron of [boiling] lead, and shut down the cover on him; and after this he put him in the furnace of the public baths; but under all these tortures the angel of God came to him, and helped him and comforted him, and made him to endure patiently, and raised him up whole and uninjured.  When the governor was tired of torturing him he brought to him a certain sorcerer whose name was Alexander, and who thought that he could cast spells on the sun and moon, and that he could ascend in the air and hold converse with the stars.  And he commanded them to shut the doors of the baths, and to sprinkle the whole building with urine; and they did as he commanded.  Then he took a serpent, and uttered words over it, and slit it into two parts.  And he took the venom and the liver of the snake, and laid them in a brass bowl, and boiled them, and then took them to Saint Abba ‘Abaskiron; and he brought the vessel into the bath house and gave the saint that boiling poison, and he swallowed it.  And the magician cried out, saying, “O master of the powers of darkness, work with thy strength upon this Christian”; and when nothing evil whatsoever happened to the saint, he marveled exceedingly.  And Saint Abba ‘Abaskiron said unto the sorcerer, “Satan, on whom thou reliest for help, will not help thee, and he himself shall punish thee by the might of our Lord Jesus Christ.”  And straightway an evil Satan leaped upon the magician, and he began to make him roll about until he confessed our Lord Jesus Christ.  And the governor commanded the soldiers to cut off the head of the magician with the sword, and they did so, and he received the crown of martyrdom.  And the wrath of the governor against the holy man was increased, and he had him tortured severely, and they mutilated him cruelly; and whilst the saint was suffering this horrible torture, he gave thanks to God.  After this the governor commanded them to cut off the head of Abba ‘Abaskiron with the sword, and he received the perfect crown of martyrdom in the kingdom of the heavens.  Salutation to Abba ‘Abaskiron. [Here is] one of the miracles of this Saint Abba ‘Abaskiron.  There was a church in a certain village in the north of Egypt, and the priests of that church were committing evil deeds; and the saint waited for them to turn from their wickedness, but they neither repented of it nor turned from it.  And the saint entreated God, Who brought upon them the disease of the plague, and they all died at once.  And the saint departed, riding upon a horse, and he arrived at a city the name of which was Beyahu, in Upper Egypt, at the time when men sleep, and when the men of the city were talking together by the light of the moon before they went to sleep.  And the saint came to them, riding upon a horse, and he said unto them, “Peace be unto you”; and as soon as they saw him they rose up straightway, and they welcomed him, and they said unto him, “Peace be to thee, O our lord.”  and he said unto them, “I wish ye to give me a little piece of ground,” and making a line on the earth with his spear he said, “This will be enough for me.”  And the men answered and said unto him, “Yea, our lord, as thou commandest us so shall it be”; and he gave them one hundred dinars in gold, and disappeared from them forthwith, and they marveled at the appearance of him, and at his words.  And after these men had gone to sleep in their houses, he transported the church from Lower Egypt to the city of Beyahu in Upper Egypt; and when the men of the city rose up in the morning they found the church standing there; and they marveled greatly, and glorified God.  And many miracles have been worked therein from that day to this.

And on this day one thousand six hundred men suffered martyrdom under Herminius (or, Arminius), the governor.  Salutation to the sixteen hundred martyrs of Herminius.  [In the Bodleian MS. the number is 18,000.]

And on this day also was re-opened the church of our holy Lady, the Virgin Mary, the God-bearer, in the market place of Wela, in the city of Mesr (Cairo), after it had been closed for three years and six months.  This took place in the year one thousand and twenty of the [Era of the] Righteous Martyrs (A.D. 1304).  Salutation to the opening of the church, O Virgin Mary.